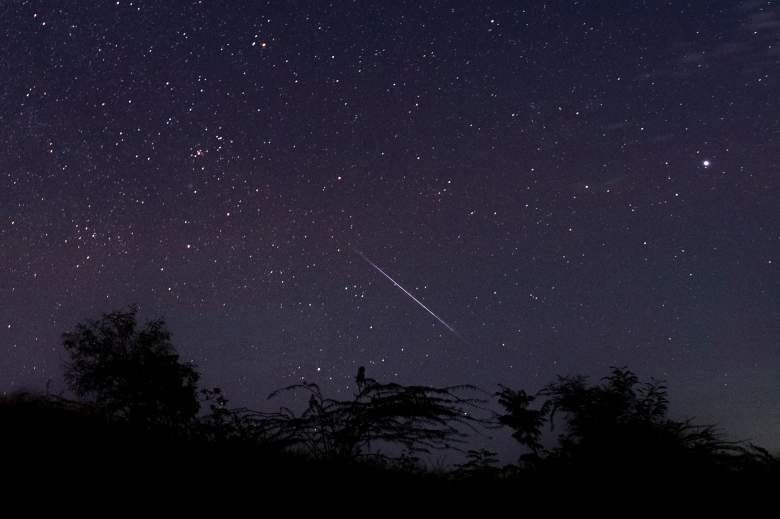 Perseids: When and where to see the Meteor Shower?

This photo taken late December 14, 2018 with long exposure shows a meteor streaking through the night sky over Myanmar during the Geminid meteor shower seen from Wundwin Township near Mandalay City.

As usual every summer, millions of people can appreciate one of the most beautiful shows in the cosmos. The shooting stars of the Perseids or “Lagrimas de San Lorenzo”, as they are also known, have crossed the night skies since July 17 and will be visible until August 24, 2021, presenting their highest point in the last hours from August 11 to 14.

What are the Perseids?

It is a meteor shower that reaches speeds that can exceed 50 km / s, and its activity rate can reach 200 meteors per hour.

According to information from El País, this phenomenon was dated for the first time in the year 36, but only until 1835 did it receive the name by which we know it today.

It happened when an astronomer of Belgian origin saw in the skies a point located in the constellation of Perseus, and from where several light sources were released as rain, what was determined in reality were small fragments of dust and rocks left by the Kite Swift-Tuttle, that melted with the heat of the sun.

About this comet, 26 kilometers in diameter and discovered in 1862, it is known to complete an orbit around the sun every 133 years, and when its fragmentary remains, some smaller than a grain of sand, enter the atmosphere, they become incandescent and transform into a beam of light, which from Earth looks like a shooting star. According to experts, this year will be especially active and more than 100 meteors can be seen per hour.

For its part, the BBC reported that “What happens is that, every year, the Earth collides with the trajectory of the comet’s orbit and all the abandoned debris,” says astronomer Edward Bloomer, of the Royal Museums of Greenwich, in England.

As these debris —Ice, dust, and pieces of rock the size of a grain of rice— they hit the upper layers of the atmosphere, “igniting in flames with amazing results, even if sometimes only for a fraction of a second,” says Bloomer.

How to see the tears of San Lorenzo?

Also called this way, because its zenith coincides with the saint’s day of San Lorenzo, on August 10, who was martyred on the grill and whose tears, according to the popular heritage, are seen in heaven commemorating his day and his martyrdom, they will be able to be spotted by anyone without the need for any special equipment. Between 9:00 pm and midnight, those who want to appreciate this wonderful spectacle offered by nature, should go to an open, secluded, dark place, clear of all light sources and point their gaze towards the sky.

“All you have to do to enjoy the Perseid meteor shower is find a dark, safe place away from the strong city light,” NASA said.

For his part, said the astronomer Edward Bloomer “Treat yourself, spread a blanket and look at the sky. It is incredibly relaxing “and is visible from all over the world.”

However, it is advisable to be patient when watching this meteor shower, because the eyes need to adapt for a few moments to the darkness. This period takes about 20 minutes. In addition, the weather forecast should be consulted, especially considering that meteorologists have forecast for this Wednesday gloomy conditions for parts of North America.

“Allow your eyes to adjust to the darkness (takes about 30 minutes), that way you will see more meteors. Also, try to stay away from the phone as looking at devices with bright screens will negatively affect your night vision and, consequently, will reduce the number of meteors you see! ”Says NASA, in statements cited by CNN.

2021 Perseid sighting in the USA

According to Radiocentro, the best weather for this year’s peak night is projected from the interior southwest to the south-central United States, where generally clear weather is expected.

While some clouds can create a few breaks around the Gulf Coast, there should be enough breaks to see shooting stars.

Other parts of the continent may not be so lucky. Partly to largely cloudy weather is forecast in the northern part and Appalachians, with some opportunity for stargazing in the Midwest and the Canadian Prairies. Although the peak night is cloudy, sky watchers will have a chance to see shooting stars.

If we cannot approach an area without light to observe the sky, we can follow the meteor shower live through the internet without leaving home:

• The sky-live.tv channel will broadcast the Perseids from the Instituto de Astrofísica de Canarias (IAC).
• Network of Bolides and Meteors of Southwest Europe: José María Madiedo, researcher at the Institute of Astrophysics of Andalusia (IAA-CSIC), will report from his Twitter account (@jmmadiedo) of the brightest Perseids recorded by the monitor systems of the different observatories of the peninsula.
• NASA’s Marshall Space Flight Center in Huntsville: From Facebook, Nasa Meteor Watch will also broadcast the meteor shower live.

See also  less than half the price with LG Cashback