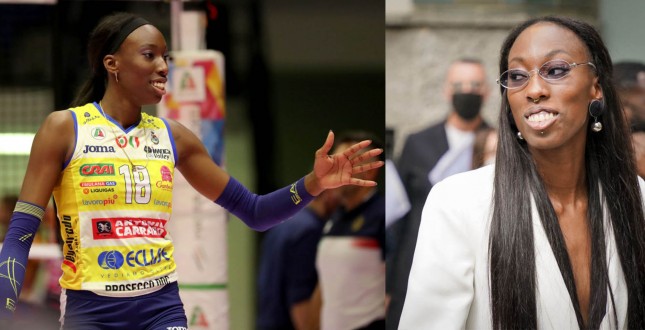 Paola Egonu: “I’m afraid how much she is in love. Man or woman it doesn’t matter.” Exclusive

The volleyball player of the national team talks about herself exclusively on Oggi on newsstands: “I am in love, happy and scared. The emotion that this person gives me is so strong … Don’t ask me the gender, it doesn’t matter “

Paola Egonu, star of the women’s national volleyball team, talks about herself in an interview with Today on newsstands. Starting with the burning issue of racism, of which she too was a victim when she was designated standard-bearer at the Olympic Games: «Did they ever manage to fatally injure her? Once. I was 14 and the parents of the girls on the other team started insulting me: racist, evil phrases in front of their daughters. A horrible memory. Some pettiness are hard to swallow. It’s bad, but I’ve come to hate the Veneto. Now people are more open, and I’m happy when I get home and I’m finally at ease “- photo | video

The cover of Today on newsstands

“WHEN TO STOPÒ TO PLAY WORKÒ FOR AN NGO ”- «It doesn’t happen to me anymore to suffer injuries, but it happens to my loved ones: I am indignant and I suffer for them. Some time ago my mom had a coffee in a cafe. They handed her a cold cup, which was on the counter, made for someone else. She protested. Her response was hateful: “If you want to drink that”. They wouldn’t have allowed themselves with a white man. When I stop playing, I would like to work in some organization that fights discrimination… What battle will I engage in? I am black, immigrant, female and sexually fluid. I’m spoiled for choice ».

See also  Formula 1: "Even further back"Mercedes and Hamilton at a loss - qualifying votes with Vettel and Schumacher - SPORT1

The dance unleashed with the special friend – guard

“GENDER MATTERS LITTLE” – It was precisely about sexual choices that Paola Egonu caused a sensation when she declared her love for a girl: «They asked me a question and I answered with sincerity. After the interview my agent told me: “But did you realize what you just said? I called my parents: at first they stiffened, but then they accepted the situation. I explained to them that I like people, and I don’t care about gender. After that story, in fact, I fell in love with a guy, and he seemed completely normal to me. Now, yes, I’m in love, happy and scared. I control frustrations, anger, pain, but the emotion that this person gives me is so strong… Don’t ask me if he is a man or a woman, it doesn’t matter ».