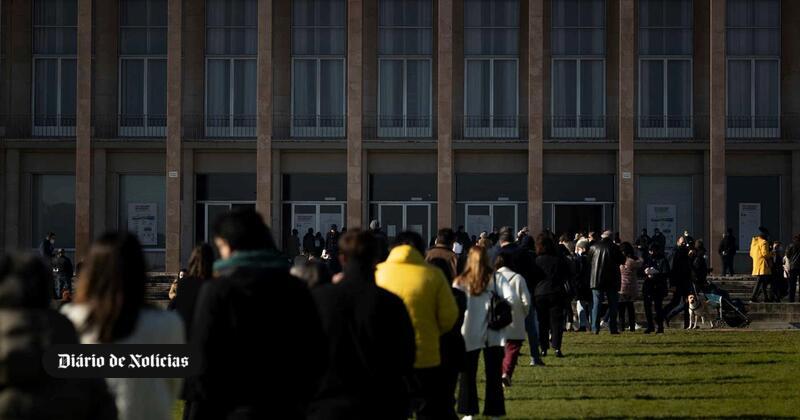 Pandemic at record values ​​could prevent thousands from voting

Registration for the early vote in the January 30 legislatives is already underway: the deadline for hospitalized patients and prisoners not deprived of political rights has been open since last Monday, extending until January 10th. The start of registration marks the beginning of a electoral process that will repeat the special voting conditions already tested in the presidential elections a year ago and in the September city councils. But, like previous elections, the legislative ones on January 30 are coming under the shadow of the pandemic that, especially in the presidential ones, will have left thousands of voters without access to the vote.

The government has never revealed how many people with electoral capacity were in confinement at the date of the presidential election, on January 24, 2021, and were then unable to vote. The numbers of the Directorate-General for Health (DGS) allow only an approximation: on the days between the closing of registration for the vote and the Sunday of the elections, with the country in unprecedented numbers of infections and deaths, a total of 67 966 people tested positive for covid-19. In this universe there will be minors and other people without the right to vote (for example, foreigners), and some of these voters could even have voted (in mobility) when they tested positive. But to these data must be added – with the same reservations – the contacts at risk that also went into isolation in those days. On January 24, 2021, 210 664 contacts were under surveillance.

Data that point to numbers in the order of thousands of voters prevented from voting in the presidential elections, which raises the same question for the upcoming legislatives, at a time when the country is breaking records of contagion with the spread of the Ómicron variant. The Minister of Health, Marta Temido, has already anticipated that the country will pass the 30,000 daily cases in the first week of January. And yesterday, Óscar Felgueiras, a mathematician from the University of Porto and one of the specialists who has participated in the Infarmed meetings, told CNN Portugal that the country will reach the beginning of January with around 600 thousand people in prophylactic isolation – “Values ​​on a scale never seen”.

See also  Page not found | The voice of the interior
Close

With the elections scheduled for the 30th, the question is to know what numbers the country will reach by the end of the month. Certainly – under current rules – that people who test positive for covid-19 from January 23 will be barred from voting, as will risky contacts of these infected.

Epidemiologist Manuel Carmo Gomes emphasizes that “at this moment we have 135,000 people under surveillance when a month ago we had 60,000”. “We are going towards the hundreds of thousands”, predicts the specialist which, however, is much more cautious about projections for the end of January. Manuel Carmo Gomes emphasizes that the experience in South Africa shows that the Ómicron variant is “so quick to infect” that it ends up suffering a sudden break. But it is “difficult to predict” what will happen at this distance, says the epidemiologist, defending a measure that – not having this direct purpose – could mitigate the effects of the pandemic on the elections: “I hope that before that the decision will be taken to shorten the period of isolation. It seems to me that, with Ómicron, these ten days [de isolamento] should go to five, we should halve”.

Whatever happens next month, one fact is certain: the law cannot be changed. The Permanent Commission – which replaces the plenary after the dissolution of the Assembly of the Republic – has no powers to change electoral laws. In fact, at this point not even a fully functioning Parliament could do this: once elections have been scheduled, the electoral legislation cannot be tampered with. What could eventually happen would be adjustments to the dates, in the sense of extension or shortening, but everything that implies changing the legal framework is now prohibited.

Registration for early voting from the 16th

In these elections, the model of voting in mobility already tested last year in the presidential elections is repeated: any voter can vote in this modality, as long as they register in advance.. In this case, the registration period starts from January 16 and extends for four days, up to 20. According to the general secretary of the Ministry of Internal Administration, which organizes the electoral process, there will be “a polling station anticipated in each municipality”. “Voters who intend to vote in advance on mobility must express this intention” either by post, or through the online platform created for this purpose. In January of last year, nearly 198,000 people voted in advance.

Another novelty that emerged in January 2021 and will be repeated now in the legislatures is the collection of votes at home. The measure applies to voters in compulsory confinement or who live in residential structures such as nursing homes or similar institutions, and also requires registration, in this case between 20 and 23 January.

At Diário de Notícias, dozens of journalists work every day to provide news, interviews, reports and analyzes that ensure accurate information to readers. And it has been that way for over 150 years, as we are the oldest national newspaper. To continue to do this “service to the reader”, as our founder wrote in 1864, we need your support.