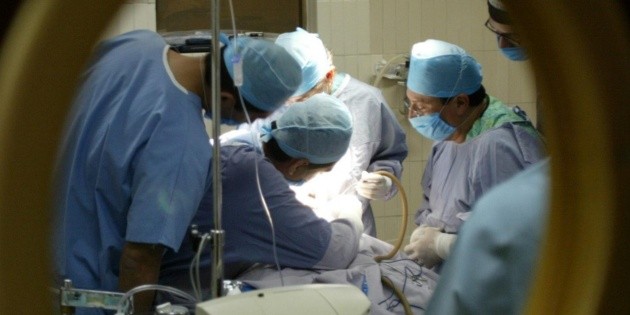 Julián Sánchez assures that his wife went into labor in November 2020, so she went to the General Hospital of the West, also known as “Zoquipan”.

Other patients agree that they sought care in private institutions because the public ones that took care of COVID-19 patients in Jalisco were full.

According to information provided by Transparency, Last year, 57,103 surgeries were registered in the second and third levels in the public hospitals of the State that participated in the plan of reconversion in the face of the pandemic, which represents a decrease of 36% compared to the previous year, when there were 89,175 (a reduction of 32,072 interventions).

The statistic includes all the hospitals of the State Health Secretariat, the Civil Hospitals and the service provided by the Jalisco State Pension Institute (Ipejal) to its beneficiaries, since it is also indicated that they paid care during the health emergency.

On the other hand, the Mexican Institute of Social Security (IMSS) replied that it does not have the data for 2020 and 2021 because in “the requested periods have not yet concluded (the statistics) and the information is in the integration phase. The final version available and public for 2020 will be given until June 2021 ”.

In past days became known that, given the drop in hospitalized patients, general services were being reactivated. For example, in Civilians they already take care of all ailments, such as those related to pulmonary physiology, hematology, rheumatology and orthopedics, among others.

On the other hand, the IMSS asks the beneficiaries to attend their family medicine and specialty consultations, such as traumatology and orthopedics, ophthalmology, internal medicine, cardiology, pulmonology, urology, gastroenterology, dermatology and general surgery, among others.

They ask patients to reschedule appointments and update studies

At the beginning of the year, José Luis Ramírez needed to have an inguinal hernia surgery performed. He tells that he went to the Mexican Institute of Social Security (IMSS), where he is affiliated, but he did not have spaces.

“It was last January and, at the time, they did not have operating rooms or doctors because everything was focused on COVID-19. They weren’t even giving consultations ”.

Although it is not an emergency operation, the situation affected him in his daily life and he could not let it go.

“It’s not life-threatening, but you can’t be okay. Everything hurts, you can’t do anything … ”.

He explains that he also had the possibility of going to the Institute of Social Security and Services for State Workers (ISSSTE), but it was no longer because he learned that the unit was also focused on the attention of the new coronavirus.

“At that time, all the people were afraid to enter the hospitals where they treated the pandemic. They entered for a different surgery and they left for COVID-19 … those rumors ran ”.

In the end, José Luis decided to undergo surgery in a private hospital, where he was operated immediately and without complications.

“I was lucky that my family helped me, but they cannot help everyone. My feeling was that, with COVID-19, the other diseases were forgotten ”.

Through Transparency, the IMSS shared that in 2018 more than 126 thousand interventions were carried out in second and third level units in Jalisco, while in 2019 the figure exceeded 121 thousand. In all of Mexico, the average in that period was 1.2 million surgeries per year; that is about 10% of all events in the country are held in units in Jalisco.

In recent days, the Social Communication area of ​​the IMSS reported that medical services paused during the pandemic have already been reactivated.

“In the event that any beneficiary has missed or their appointment for studies or consultation was suspended during the pandemic, it is necessary that they go back to reschedule it, according to the level of care required. Before any important symptoms or deterioration of health, they should go to the emergency room of their medical unit ”.

Like surgical procedures, the IMSS highlighted that “It is important that they go to their doctor again so that the preoperative studies and the evaluation for their new surgery schedule are updated.”

The Mexican Institute of Social Security (IMSS) and the Civil Hospitals reactivated general services after the loss of COVID-19 cases.

Jaime Andrade, director of the Civiles, answered that with the hospital reconversion they added 750 beds to treat infected people, but in recent days the average was 13 people, so they reactivated the general consultations of other diseases related to pulmonary physiology, hematology, rheumatology and orthopedics, among others. It indicates that the paused services were not of an urgent nature.

In the Old Civil Hospital, the infected will be received on the Infectology floor. And in the Nuevo, in the area of ​​Internal Medicine.

On the other hand, the IMSS asks the beneficiaries to attend their consultations for family medicine, specialty, surgeries and other medical services that are already recovering after the decrease in virus infections.

“Some of the specialties that are already in normal operation are traumatology and orthopedics, ophthalmology, internal medicine, cardiology, neurology, urology, gastroenterology, endocrinology, pediatrics, psychiatry, nephrology, angiology, dermatology, rheumatology and general surgery, among others” , he shared.

A month ago, the Ángel Leaño Hospital, exclusively for COVID-19, closed after 10 months of operation. An interview was sought with the Ministry of Health to find out what will be returned to the Government of Jalisco, but it did not respond.

Due to the coronavirus, one in five admissions in Ipejal

The State Pension Institute (Ipejal) reports by Transparency that in 2020 he subrogated a total of 3,663 surgeries, which represented a decrease of 42.8% Compared to the same period of the previous year.

According to the database provided, of that income, 17% were events related to the new coronavirus, either as probable, confirmed or suspected cases; that is, one in five.

On how many operations that are not emergency or urgent are paused, he indicated that “work has continued based on hospital availability, as well as with the COVID-19 care protocols, for continuous care in surgeries.”

Ipejal reported that the hospitals authorized for emergency care outside the hours of the “Unimef” are the Bernardette Hospital Center, the Guadalajara Sanatorium, the Terranova Hospital, the Santa Catalina Hospital Services and the Santa Margarita Hospital.

On the other hand, the Ministry of Health was also asked about how many interventions were paused, to which it responded: “The scheduling of surgeries in each unit varies depending on the demand for qualified services and emergencies that are presented and that merit a surgical intervention, postponing some others that do not compromise the life and health of the person. However, it is about giving attention as soon as possible and, in case of lack of resolution in said hospital unit, the referral mechanism is applied for the referral of the patient to another unit with higher resolution, for this reason there is no system of the that the information can be extracted to be able to provide it ”.

A year later … they will pay for serious illnesses of children

Do you have any pending surgery in public hospitals?

Participate on Twitter in the debate of the day @informer