Panarin famously mocked the American in the NHL. And finished the match already in the first period

The amazing feint of the Russian striker is played all over America. The only pity is that Artemy could not finish the meeting.

Russian hockey players in the NHL regularly find themselves on opposite sides of the barricades and, as a result, experience opposite emotions after head-to-head matches. This happened in the meeting between the New York Rangers and the Carolinas.

The little-known Russian goalkeeper Pyotr Kochetkov, who got into the Hurricanes’ goal after injuries to two main goalkeepers at once, continues to write the most fabulous story of this regular season, winning the third match in a row.

But the fans of the “Rangers” are upset not only by the defeat, but also by the loss of Artemy Panarin. The Russian striker was injured and ended the meeting ahead of schedule.

But before the fatal episode, Panarin brought the audience into ecstasy, and his amazing feint is played all over America!

The match between the Rangers and the Carolinas was supposed to bring clarity to the fight for victory in the Capital Division. Both teams have long secured participation in the playoffs, but no one wants to meet in the first round with Washington or Pittsburgh.

In the second period, Carolina managed to translate a small game advantage into two goals scored, and Chris Kreider, who had already scored 52 goals this season, was able to break through Petr Kochetkov’s Rangers. However, at the end of the 20-minute period, the club from Raleigh scored for the third time, and at the very beginning of the third period, they brought themselves as close as possible to victory – 4:1. Before the final siren, the Blueshirts showed their character and gave the fans hope, but in the end they could not escape.

The final result was probably affected by the absence of Panarin on the ice. Artemy left the ice in the middle of the first period, holding on to his back, and did not participate in the game anymore. New York fans are hoping that this decision by the coaches is nothing more than reinsurance before a tense playoff.

The ingenious trick of the Russian forward

Moreover, Panarin, even in a few minutes of playing time, managed to bring the audience into ecstasy. Already in one of the first shifts, he launched into a stroke and literally mocked defender Jacob Slavin. At first, Artemy drove the opponent along the blue line, and then, in the same attack, broke through along the board, performing a stunningly effective feint.

Our striker deceived Slavin by throwing the puck between his legs, which caused an enthusiastic roar in the stands of Madison Square Garden. From the corner Artemy gave a pass along the gate, but Zibanejad’s shot was deflected by Kochetkov. And so it would be one of the most luxurious “assists” of the season. 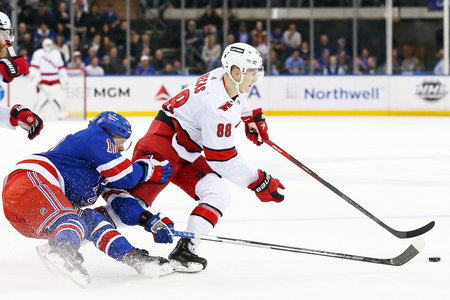 Despite the absence of a goal, Panarin’s trick became one of the main highlights of the game day in the NHL. It is played in the USA, and fans are amazed at the skill of the Russian star in social networks:

How easily Panarin made one of the best defenders in the league look like a nonentity.

— What a brazen trick!

And the fans of the Rangers hope that Artemy will return to the ice as soon as possible, because to see such miracles performed by a player of his team is a special kind of hockey pleasure.