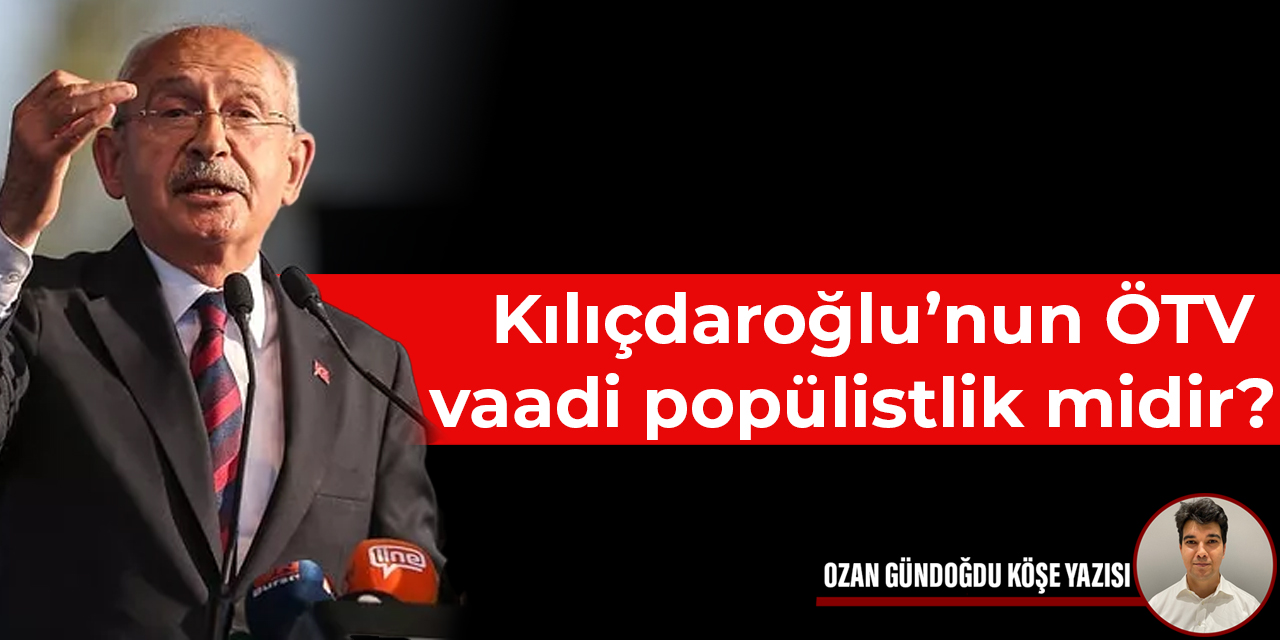 CHP Leader Kemal Kılıçdaroğlu’s statement that he would lower the SCT on automobiles was met with interest and brought with it a discussion. The question around which the debate is centered is: “Is it right to reduce the excise duty on automobiles?”

Some of those who say it is wrong say that such an application will increase the demand for automobiles and thus the current account deficit. Some say that tax cuts will cause inflation as it will increase the amount of money in the market. They first take the problem apart and deal with each piece with the meticulousness of an engineer. But at the end of the day, this method prevents a comprehensive reading by evaluating the historical, social and economic conditions together. If automobile prices fall, demand for automobiles increases, in which case imports will increase, etc. etc.

But “narrow financial glasses” He understands politics as economy and Kılıçdaroğlu’s SCT reduction proposal. “populism” interprets it. What does this populism mean and in what sense is it used?

When you translate the word fully into Turkish, “populism” possible to say. But I am aware that we attach emotions to words. “Populism” The term has positive sentiments as it is one of Atatürk’s principles. Against this “populism” We remember the term with negative feelings. In that case, it should not be translated as populism.

As a term that Mesut Yılmaz introduced into our literature, “People’s flattery” I think the expression can be used as the Turkish equivalent of populism. Both terms have a similar negative emotional charge.

But let’s think without letting our emotions manipulate us; Something that could be translated as populism or popular flattery might not be a bad thing, would it?

Not! Because, “populism” What is meant by the term is not a form of politics that looks after the benefit of the people. So what is the intent? It speaks of an understanding that engages in politics based on the dominant identity of the society (for example, white, Anglo-Saxon, Protestant in the USA, Catholic in Brazil, of course, Sunni in Turkey). But how does this differ from 20th century fascism, one might ask? Hitler was also leaning on Germany’s dominant identity.

Hitler was doing this among people who had not yet seen a photograph of the earth taken from space. The spirit of that time invoked such fascism. But in the 21st century, things work differently. Many social scientists, anyway, instead of populism “neofascism” says.

After leaning on the dominant identity, you begin to manipulate all the class inequalities imposed by capitalism. It is a universal method to attribute the root cause of poverty to homosexuals, minorities and refugees everywhere. But you can also find local examples. For example, in the USA, “You are poor because blacks have taken over the White House” you can say. Turkish version of this It is “CHP”. The populists here say, “You are poor because the CHP took over the state” They can create a specter.

Now such a goddamn way of doing politics, “populism” Therefore, it is incorrect to translate as. It’s a term we don’t have a negative feeling about populism. “People’s flattery” may be closer, but it’s also an enigma.

well, “populism” If this is the case, how can Kılıçdaroğlu’s SCT reduction be interpreted as populism?

Because what you read in this article is correct for some people, but it is incomplete. According to them so far “Right populism” I told you. One of this “left populism” there is. That’s what Kılıçdaroğlu did. This is the allegation.

According to those who make this claim, the public is between social classes, for example, between the worker and the boss. “unbiased” should be. If the public is in an activity that disrupts the balance between classes and the market, this may give the desired result in the short run, but in the long run you will become worse than before. In addition, capital movements should also be free. Capital should be able to enter and exit countries whenever it wishes, and should not be subject to a slowing or burdensome control. The banking system should be designed as the gateway to foreign capital. Loans should be used at the maximum level as long as they do not create inflation. Why? Because the market provides the best result. There is no other alternative to this.

This claim became the dominant view in the world nearly 40 years ago. In order to get a share in capital movements, states drastically reduced taxes on capital. For example, the corporate tax rate on company income in the USA in 1980 was 48 percent. 21% today. As a capital exporting country, the USA called its capital from all over the world to its country with this step. On the other hand, peripheral countries were forced to make similar tax cuts.

So who will feed the treasury if companies’ tax burden is reduced? Thus, the tax base began to spread. It was explained that this is a good development, so that the capital, which is not crushed under the tax burden, will invest comfortably and create employment. However, the accumulated capital preferred to flow into tax havens. General consumption taxes, which will be on the shoulders of large sections of the public, thus began to gain importance all over the world since the 1980s. In our country, Value Added Tax was introduced in 1985 and Special Consumption Tax in 2003. Today, these two taxes, in the first half of this year, constitute 4 liras of every 10 liras entered into the Treasury.

The neoliberal program that has been implemented for the last 40 years has led to the disintegration of the urban professional, wage earners who have been described as middle class over the years. This happened not only in Turkey, but all over the world. Although the disintegration was a little later in the West, where the middle class was stronger, violent examples of neoliberalism began to be seen in the West as well. During the yellow vest revolt in France, the whole world followed the process with concern. Besides, “financial crises only happen in peripheral countries” proposition vanished into history with the 2008 Global Financial Crisis. The 1929 Crisis lasted for 16 years. It also included the Second World War. The whole world has been searching for its new paradigm for 14 years, since the 2008 financial crisis. It hasn’t been found yet.

In other words, it may be the dominant thought in the world for 40 years, but it is clear that the system has gone bankrupt for the last 14 years. But the cracks of the crisis are breathing into neofascism all over the world. We are talking about a system that has destroyed humanity in a series such as the climate crisis, the migrant crisis, and the financial crisis.

Proponents of this system see populism as populism. He says that populism is also populism. “You have to be neutral between classes, you take sides, you move on the side of the worker, then you are a populist too” they say. Kemal Kılıçdaroğlu’s promise that we will lower the SCT on automobiles is thus made equivalent to neofascism. Democrats against the AKP are doing this, too. I think they are unfair.