I have been testing new devices from Sberbank since December last year.

The company started with the small and inexpensive SberBox TV dongle, but later released the more advanced SberPortal smart display. The second device turned out to be multifunctional, albeit slightly overpriced. Now I got my hands on the SberBox Top media center – this is no longer just a small dongle, but a whole “smart” system.

Spent a week with the novelty. I have a story to tell you.

SberBox Top is a home TV media center. It connects to a TV via HDMI and converts it into a “smart” hub with a built-in camera, virtual assistants, speaker and Sberbank services.

It also weighs relatively little – only 300 grams. It can be easily installed on a TV: it does not outweigh or swing in different directions.

The design is as simple as possible: in front we are greeted by a large camera lens and six microphones. Above – the company logo and the microphone mute button. On the sides are LED strips and a speaker for sound output. They allow you to work with the gadget when TV off, But more on that later.

Below is a universal rubberized TV mount… There are two options for placement: on the top of the TV or on a flat surface (table, cabinet, and so on). Finally, on the back are HDMI, USB-C and power.

If you are afraid for your privacy, the camera is hidden by movable physical doors, and the microphone can be turned off.

How to operate SberBox Top

There are as many as three control methods provided here: through virtual assistants, gestures and a remote control.

I have already talked about the first one many times. I will repeat briefly:

▪️ Sber: neutral character, but with an emphasis on the geek community, you can chat with him about technology, comics, music, games and so on

▪️ Joy: a cheerful and perky girl, she addresses the user on “you”, helps in solving any everyday tasks, but does it as a friend, not as a colleague, loves to play

▪️ Athena: business partner, communicates exclusively on “you”, increases productivity and efficiency, considers himself more organized than any other person (although he understands that she is only virtual)

In fact, all assistants differ in character, but can perform the same functions. It just happens in different ways, but the result is the same. Each of them can give practical advice in one area or another. 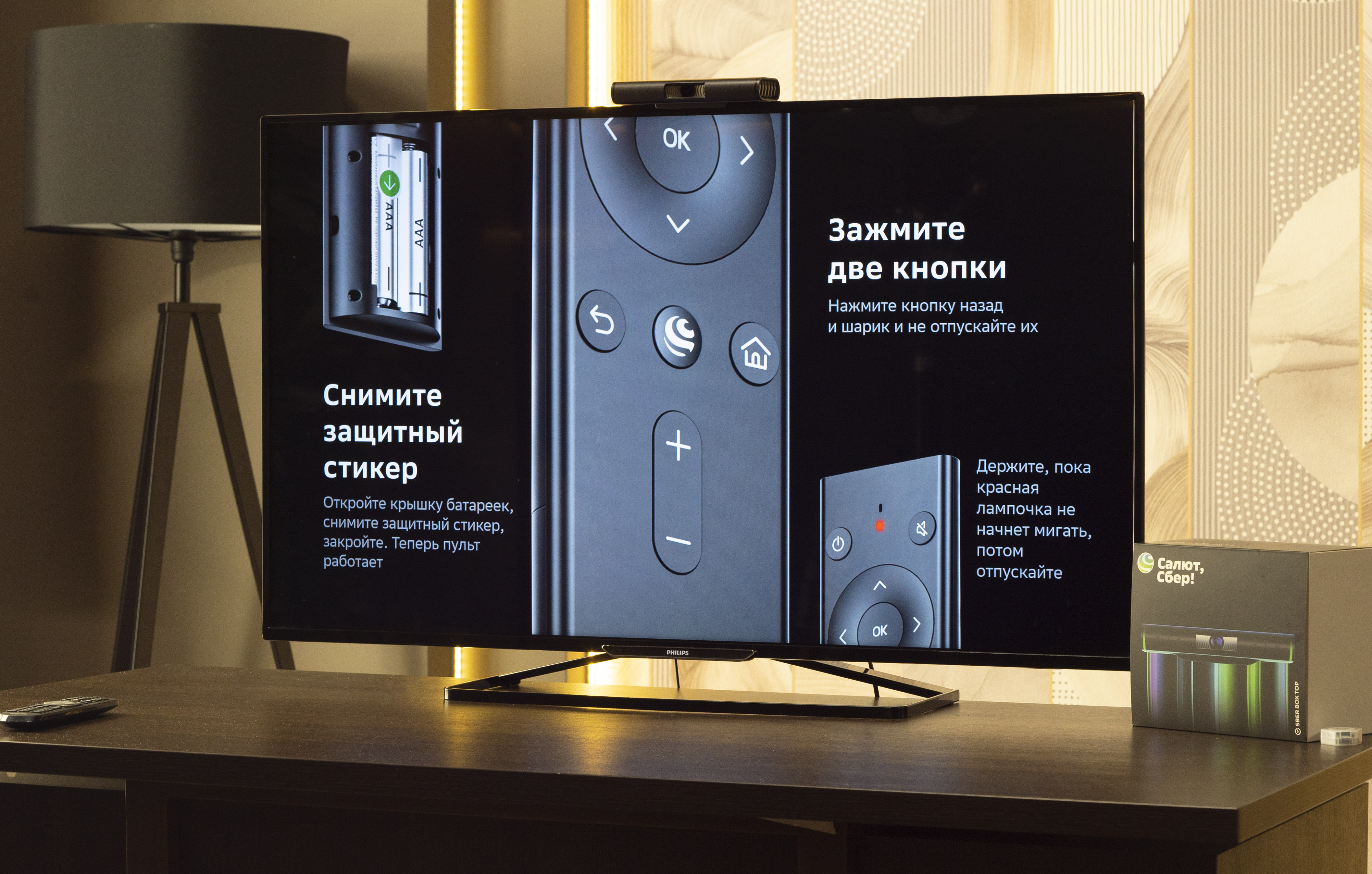 The remote control for physical control of the set-top box has power buttons, microphone mute (built into the remote control), menu navigation, Home and Back buttons, as well as calling assistants. Well, the volume control, where is it without it.

The third way to control SberBox Top is gestures… A camera built into the media center tracks the user’s movements and assists in interacting with the device. For example, if you show an open palm at it, then playback will pause. A thumb up will show that you have rated the content or want to add it to your favorites. The camera is 8-megapixel, it sees the user well. A certain number of functions revolve around it, in addition to the usual gestures.

So, in games, the camera tracks your movements, and for yoga, Zenia monitors the correctness of your exercises.

What SberBox Top can do In terms of functionality, the media center provides everything that SberPortal does. Namely:

▪️ watch movies and TV series from Ökko in up to 4K resolution or just videos via YouTube and similar services
▪️ listen to music via SberSvuk
▪️ listen to the radio
▪️ play small games from third-party developers; there are not very many of them, but the platform is constantly evolving (for many, a gamepad is needed, which can be a smartphone, there are special overhead sticks in the kit); you can also use the streaming game service SberPlay
▪️ watch TV channels
▪️ use third-party applications (for example, Telegram)
▪️ order goods from the Scooter
▪️ manage smart home devices
▪️ monitor the weather
▪️ by voice from TV make an appointment with a doctor or a beauty salon, book a table in a restaurant
▪️ read news feeds

Moreover, Sberbank just recently pleased that now you can control smart home devices not only of your own production, but also from third-party companies. The list has already made Philips Hue, Aqara, EKF and ELARI, and soon there will be more of them.

As for its technologies, Sberbank has smart bulbs and sockets. Light bulbs can be finely tuned and dimmed. By the standard, it is yellow, but it is allowed to make it lighter, or you can use prepared options, such as romantic or cosmic light.

With an outlet, everything is even easier: I inserted it, connected it via the Sberbank Salute application, turned it on or off in the same place, with the remote control through the menu or with the help of assistants. 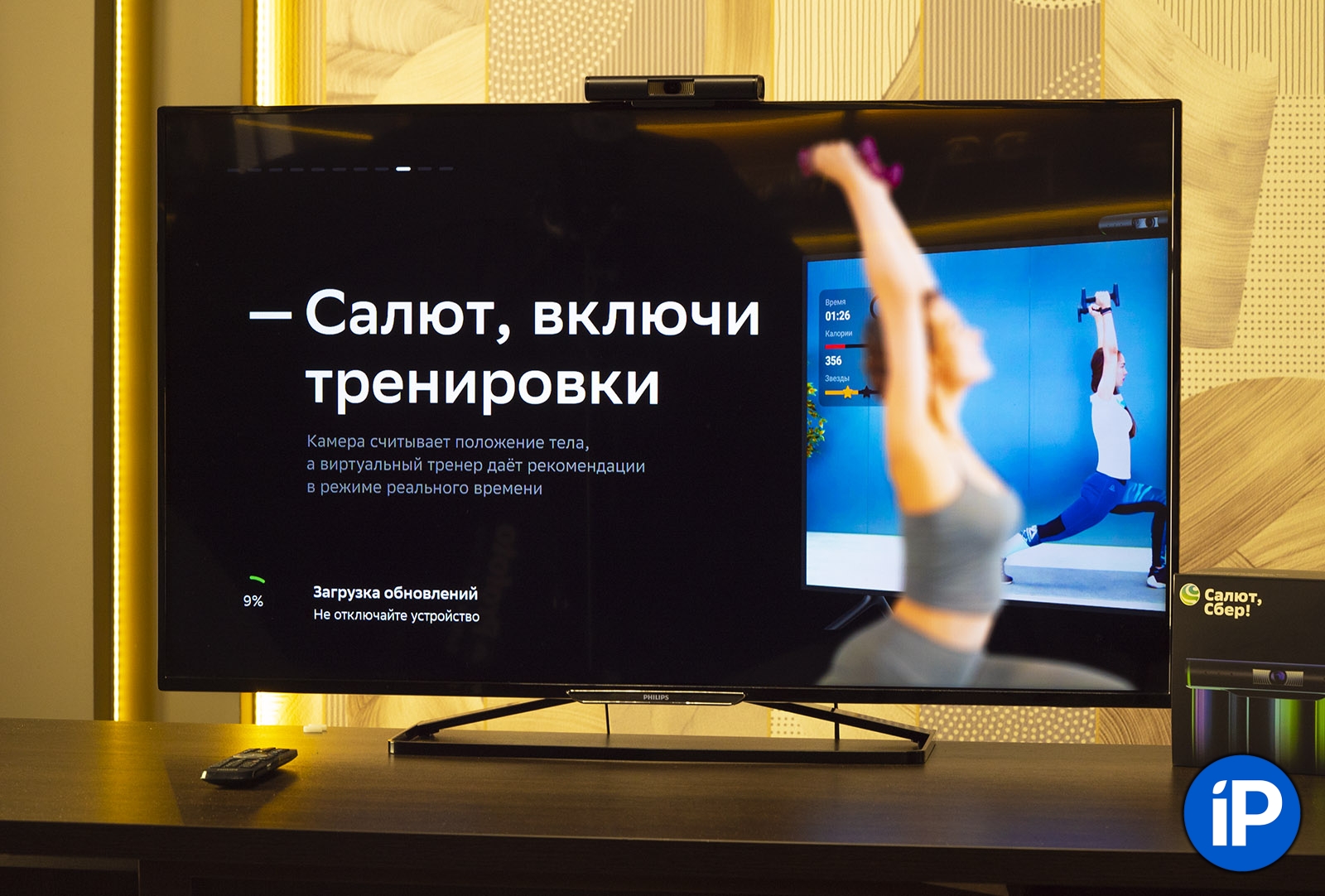 For games, in particular, there is the cloud gaming SberPlay. While the list of titles is very small, it will expand over time. So, WarThunder, Crossout and CRSED: FOAD are available via Bluetooth connect a gamepad from Xbox or PS4 / PS5… By the way, you can also run games from the Steam, Origin and EGS libraries.

While the service is in beta test, there may be connection problems. Although personally I had practically no complaints about him. The input lag was minimal.

Finally, the Jazz by Sber video conferencing service is available. It allows you to create video chats up to 100 people without time limits. In addition, you can call via Telegram. Video calling is also available.

For video conferencing, a smart tracking function is provided. It keeps you always in focus, even as you move around the room. I tested, and she really did not take her eyes off me, so to speak. A really useful innovation that you rarely find anywhere, and the iPad Pro with M1 was brought recently.

Wow. SberBox Top works even with the TV off This is a really useful function for a gadget. If your TV is turned off, TV Media Center still working as a smart speaker.

That is, you can listen to music through the built-in speaker, turn on the video in the background and continue listening to it. Well, this is also a smart device, so with the TV turned off it is easy to control voice assistants and smart home devices. I liked SberBox Top. It came out as a balanced device at an optimal price.

Of the claims, I can still single out braking interface… I don’t know when Sberbank will optimize it for all its devices, but it works smoothly and without loadings only in SberPortal. Here, they are also comfortable to use, but all the same, periodic twitching and small downloads of simple applications are frustrating.

It is pleasant to play, delays in streaming are small, but there is still something to strive for. Loudspeakers sound okbut nothing outstanding. But it is better to turn to SberPortal for sound as well. For such a compact device, the playback quality is acceptable, but I would not call it excellent. Just not bad, but nothing more.

The abundance of features can be confusing for the untrained user. However, this is rather a bold plus. Such a compact device can really do a lot.

What is the bottom line According to the results of SberBox Top, it turned out to be the golden mean between the cheap SberBox and the top-end SberPortal. It costs accordingly – 14,990 rubles.

I can really recommend this device to everyone who needs advanced “smart” capabilities and who are attracted by the Sberbank ecosystem. Looks good, privacy is respected, can do a lot, and there are also three voice assistants.

SberBox Top fulfills every penny invested in it. Although there is something to complain about.

📷 All photos in the article:

I was pleased with the device.

Main on news, clickbait and typos. I love electrical engineering and do fire magic. Telegram: @TemaBausov