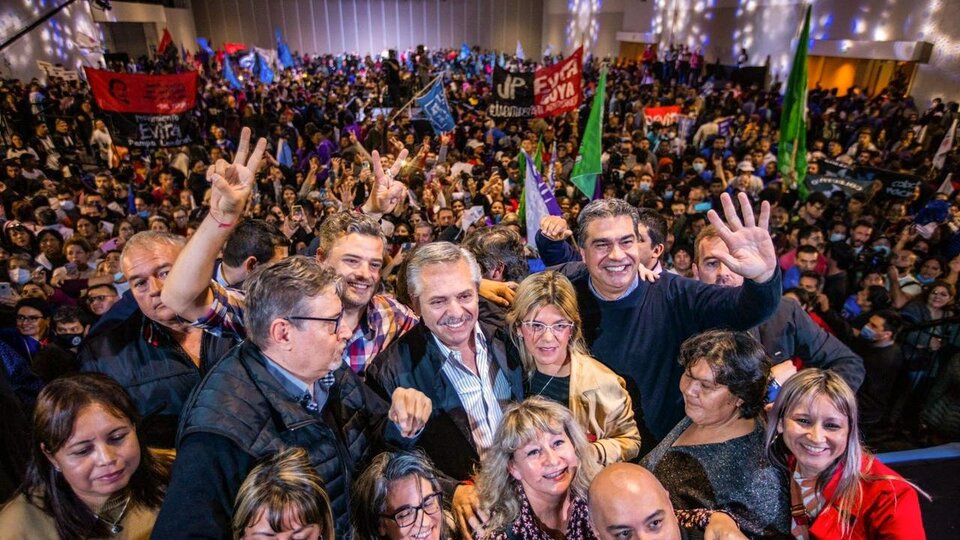 “Our enemy is not in the FdT, but in that damned right” | In Chaco, Alberto Fernández called for the unity of the government coalition

“Our enemy is not in the Frente de Todos, but in that damned right that once again wants to subjugate the Argentine people,” said President Alberto Fernández in an almost campaign tone. He said it in the city of Resistencia, Chaco, a Kirchnerist province –governed by Jorge Capitanich– and which became the first district to institutionalize the Frente de Todos. Strictly speaking, an idea that he knew how to encourage the president himself but that now eludes him. “Don’t let them divide us. The day we divided, Macri was president,” repeated Fernández, who rightly insists on the need to take care of unity, even though it has been almost three months without meeting or speaking with the main shareholder of the FdT, Cristina Fernandez de Kirchner.

The Convention Center of the capital of Chaco was full from early in the morning. More than 3,000 people crowded into the auditorium where despite the cool for Chaco, sweaty faces could already be seen as a result of the high humidity that heralded rain towards the evening. The representatives of the Justicialista party, social organizations such as the Evita Movement, loyal to Fernández, different unions and the 31 parties that make up the Chaco FdT had arrived there. The work in commissions later became a joint document that was delivered to the President.

“We seek to guarantee unity in diversity,” said Capitanich, who mobilized to demonstrate the strength of the local FdT but also for the President to see and feel the convenience of having an institutionalization of the ruling coalition as a way to resolve internal tensions. Capitanich, in that sense, affirmed that for the Chaco it is the only way to guarantee “unity in diversity, for which we are made up of 144 congressmen, 36 members of the provincial council, 31 members of the executive committee.” He now hopes that it will be replicated in the rest of the provinces and, above all, at the national level.

“Differences do not have to divide us, but teach us to build a path that allows us to solve the problems of Argentines,” the governor claimed without naming Cristina or the President who was waiting his turn to speak. He insisted on the convenience of giving the FdT an institutional bias and for that “a broad, plural and democratic call must be made.”

The event was a party. The chants at times made it impossible to hear the one next to you. Capitanich shouted: “We don’t all think the same, but in the Frente de Todos we are united by a democratic, national and popular project that guarantees sovereignty and dignity for the Argentine people,” he said and they applauded him wildly.

“Together, united, we will be able to fight inflation, take care of the salary and work of Argentines and go out together to highlight everything that has been done” and “to participate openly so that next year the Republic continues to govern the Front of all, and continue building the Argentina that we deserve”, said Capitanich and gave way to the President.

Fernandez and the unit

For Alberto Fernández was the closing of the act. He spoke of the growth in production and predicted that “decades of growth, production and development” await the country. That is why he recognized that “the last thing I would want is that when that development arrives, when the dollars arrive, those who appropriate the wealth and forget the people govern.” He asked everyone “to put all the strength that the Frente de Todos needs, to go through the remainder of the government together so that in 2023 we can once again give Argentines the joy of having a government that takes care of them.”

The President did not mention who would be the candidate next year. He also did not say that the Chaco institutionalization is going to be replicated at the national level. For Fernández, at least in his speech, what mattered was making it clear that unity is essential: “We have to build the greatest possible unity, because what I am saying is not different from what any leader of the Front of everyone,” he said.

“Comrades, in the Frente de Todos there are no enemies, there are differences. But we have learned to respect each other with those differences,” Fernandez insisted in what seemed like a message whose recipient, or the main one of the possible ones, is currently in Santa Cruz. There is the vice president who did not participate in this Congress of the FdT del Chaco.

Fernández’s speech stressed that “a comrade who goes out and criticizes, time will tell if he is right or not, but he is a comrade. Don’t let them divide us.” The phrase sounded like a response to the criticism that is usually deployed from the ranks of Kirchnerism.

Near the President, the entourage that had accompanied him applauded. There were the Secretary General of the Presidency, Julio Vitobello, the presidential spokesperson Gabriela Cerruti, the Secretary of Parliamentary Relations Fernando “Chino” Navarro, among others. Everyone agreed with the presidential phrases that called for unity. The issue is that the real and concrete gesture that embodies that declaimed unity is still absent.

It could well be said that the presidential words lacked an announcement, a test of how the differences that exist in the Front of All will be resolved in a concrete way and not just in a declamatory way. Fernández did not say so, nor did he even make a reference to the possibility of starting the process of institutionalization at the national level. He only stated that “we have to build a country that unites us and put aside the differences we may have and realize that several common denominators unite us and differentiate us by which way to go.”

In another section of his presentation, Fernández spoke of the need to remember the results of Mauricio Macri’s management, since “harmful consequences were inherited in 2019” where “they made sure that real wages really fell”, while remarking that ” The world we live in is complex. That is why he stated that the opposition leaders “go for their rights.”

“We have a common denominator that forces us to produce more, to generate more formal work and to distribute wealth more correctly. Those are our three basic pillars,” Fernández added, later stating that “we are children of Perón and Evita” and affirmed that “we are here to continue fighting for a free, fair and sovereign country because we have a responsibility and that is that the wealth, the profit of Argentina does not remain in the pockets of a few”.

“Politics has an ethic, it is the ethic of responsibility and it forces us to get out of the bottom those who are most neglected in our societies. That is why we do politics, not for anything else,” he concluded.