Ian is already a tropical storm, but still has a major danger to central Florida and highly populated areas such as Orlando. The rain has not stopped since yesterday, Wednesday the 28th, and there is still a danger of tornadoes; there are some areas flooded by collapsed sewers and the Florida Turnpike is closed in both directions between miles 254 and 267.

Walt Disney World, SeaWorld, Universal Orlando and Legoland have already announced closures from Wednesday 28 and at least until Thursday 29, as a precaution. A report by the local channel News13 showed that the entrance to the Double Tree by Hilton hotel, in Universal Studios, is completely flooded on Major Blvd, where there are also cars disabled by the water. Other reports of devastation in the area – still unconfirmed – show damage to the Jurassic Park River Adventure at Universal Orlando Resort, possibly a collapsed wall.

The Orlando International Airport, which ceased operations on Wednesday the 28th, is also inaccessible, according to an official statement: “All roads leading to the MCO are closed due to flooding. This includes all major and minor arteries, including Jeff Fuqua and Heintzelman boulevards, and Bear Rd and Cargo Rd.” The airport is expected to operations resume sometime on Friday the 30thas permitted by damage currently under assessment. 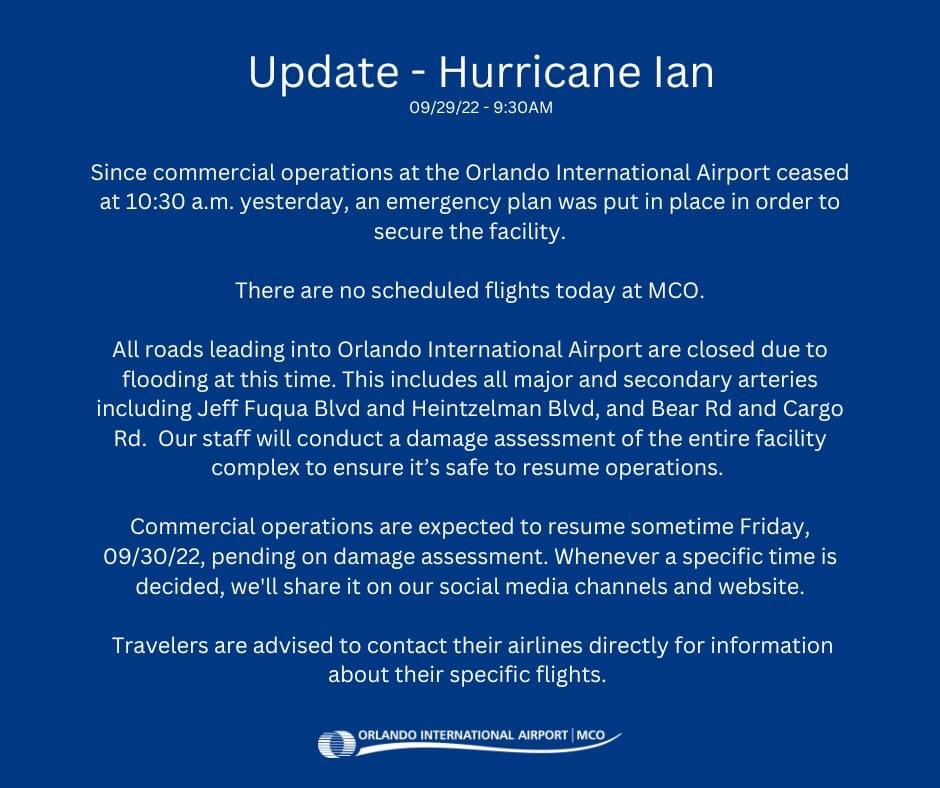 The statement from the Orlando International Airport (MCO) estimated that activities could resume on Friday the 30th.

As of 8:00 a.m., the storm was about 70 km east of the city of Orlando, with winds peaking at 65 miles per hour (78 km/h). The National Weather Service has issued a flash flood warning for five areas of Central Florida, including this town known for its major theme parks, including Disney World and Universal Orlando.

See also  What did the New York Yankees do? Of great importance? What you need to know about the sign stealing card

Legoland has announced that the closure of the complex includes the theme park Legoland FL, Peppa Pig Water Park and Theme Park. Tickets dated from 28/9 to 10/2 will be automatically extended to 12/31/22. Holiday accommodation during this time can be rebooked without penalty.

SeaWorld Orlando announced its closure from Wednesday through Thursday and offered an extension on guests’ tickets for those days. They ensured the safety of the animals and encouraged fans to check the park’s social media channel for updates.

centre #Orlando Lake Eola. Waters have receded significantly – it was much worse than that – but another bout of heavy rainfall is on the way and the area is expected to flood again. pic.twitter.com/0aoT2EQT5p

Authorities in Orlando were preparing for the storm. Area schools are closed. To prevent or mitigate flooding, the local government lowered the levels of the lakes in the area. Another important factor in the preparation was an intense garbage collection, to prevent it from becoming projectiles due to the strong wind.

Ian was categorized as a tropical storm on the morning of Thursday the 29th, but it is still life threatening. Storm continues to dump record amounts of rain for his step. Winds have picked up since midnight. In the area where Orlando is located sExpect about 12 to 18 inches of rain (300 to 450 mm) throughout the region with local maxima up to two feet (610 mm).

See also  A baby was attacked in his crib by a Pitbull: he is in therapy

Some consulates have started offering help to their countrymen stranded by Ian. Among them, the Argentina based in Miami He published his phone number on the networks to help Argentinians who need help: +1 (305) 373-1889.

LIVE: Gov. Ron DeSantis has confirmed at least two deaths after Hurricane Ian passed through Florida
Joe Biden has declared a major disaster in Florida due to the course of Hurricane Ian
The impressive moment a meteorologist is swept away by the winds of Hurricane Ian