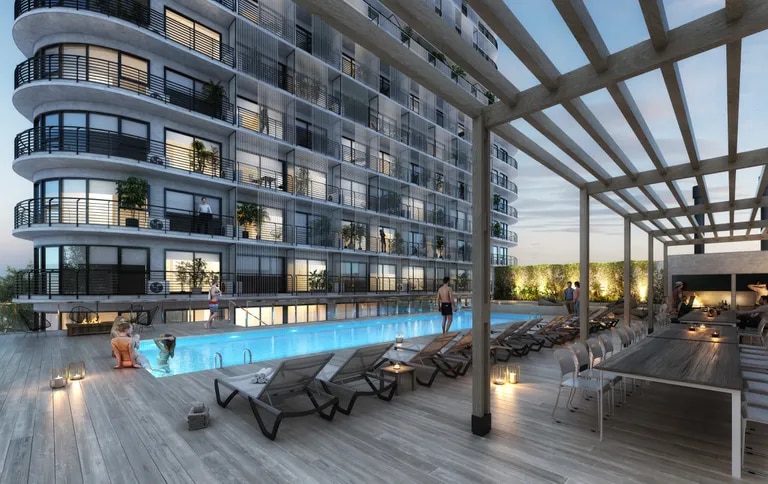 Opportunity: where to get a 28m2 studio apartment in a building with amenities for US$45,000

A panel of references from the real estate sector that participated in the 7th. chapter of Summit de Real Estate organized by THE NATIONanalyzed the current market and advanced why the situation is beneficial for the real estate market

“In Argentina there is always a business of real estate to make”Herman Faigenbaum, CEO of Cushman & Wakefield, anticipates, “there are some opportunities that are quite clear, they are not my expertisebut if one looks at the price of the used ones in CABA are at nominal values ​​in dollars, that is, the same amount of dollars per square meter as in 2010, I have no doubts that there is an area of ​​opportunity”. This is how the talk started, the reference that the panel shared with Daniel Mintzer, founding partner of G&D Developers, Marcelo Costanza, president and founder of Caleta Desarrollos; and Lucas Salvatore, director of Idero, the company that builds turnkey works.

“We are in a moment of great strength. the beauty of real estate is to add value by creating some area or something different, we like the challenge”, adds Daniel Mintzer, founding partner of G&D Developers, who is developing a project in the Colegiales District together with Fernández Prieto on land that belonged to the railroad and that they bought from the State. “Also we are doing a business which we call Moca, in the heart of Barracas, in an emblematic building located on the corner of General Hornos and Enrique Finochietto. It is a place that if you want is ugly because it is four blocks from Constitución and on top of the highway but, let’s look at it with good eyes; It is three blocks from the train, two blocks from the highway exit, three from the Metrobús, three from the subway, universities five, six and seven blocks away, near downtown. That gives us the option of providing a building with all the amenities por US$1600/m²”, explains the reasons. In concrete numbers, he details that an apartment of 28 square meters costs US$45,000 and it can be paid for with good financing options.

The panelists agree that a high dollar generates convenient prices and that it is a good time to buy. In other words, they refer to a context that they define as “of certainty”, in which you can buy a property in foreign currency as an entry and pay the rest in pesos, with what people earn. “In this context, the figure of the developer is very important for the end customer because, despite there being so much disparity from the financial point of view, the building is going to be finished,” says Marcelo Costanza, president and founder of Caleta Desarrollos, the developer that took its first steps in Puerto Madryn and that landed in Buenos Aires in 2019 with projects in Palermo and Punta Chica in the north. The businessman emphasizes the confidence of accessing a developer with more than 20 years in the industry is peace of mind for buyers.

“One advantage we are seeing is that, through a much more accurate construction system and with much more accurate deadlines, today instead of entering into a development that takes three years to build, it can be built in one, and that gives the investor certainty”, explains Lucas Salvatore, director of Idero, an industrialized turnkey construction company with a steel soul.

Regarding post-pandemic strategies, Costanza explains that They began to look at the North zone corridor, so we began to look for land in San Isidro and San Fernando, trying to do smaller projects, to measure, with more added value, targeting a segment that is the one that is most active today.. In Punta Chica, Caleta Desarrollos carried out a house project that sold for between US$280,000 and US$300,000. “We only have one left to sell,” he explains. Now they are looking for more land in the same areas, near the University of San Andrés, the General Boulevard. Arias in San Fernando. “One of the things we thought when we came from Puerto Madryn is that we were going to have problems getting land, and the truth is that there is a lot of supply, the issue is what filter you want to work with, and there is the developer’s first filter,” explains the president of Caleta Desarrollos.

When talking about costs and when asked: what is the value of a square meter of a turnkey house, Salvatore answers: “In terms of houses built in a premium private neighborhood, we are between US$900 and US$1,200/m² depending on the model, since we have 28 different ones that adapt to the needs of the clients. Unlike what we thought, today all the houses we are building are over 300 square meters”. And when asked if there was resistance from the demand, the businessman answers no. “There is a paradigm shift that is consolidating and that is going to be absolute when there is a generational change, for various reasons: they are much more interested in sustainability and immediacy,” he deepens.

In line with the opportunities generated by the sector, Faigembaum deepens that they are working on a study that indicates how those who invested in offices from 2009 onwards fared. The study compares the different situations: those who bought dollars and kept them in the mattress, Argentine bonds, or those who invested in the Stock Market. And investment in offices beats all of them “by theft” because not only has it had a very good performance in terms of maintaining its value, but it also generates an income that has fluctuated between 5% and 8% every year..

In any case, the referent clarifies that since everything is changing in the world of offices, it is necessary to look at what is the product that works, the new markets, the demand of the companies that today have changed and are different. “Areas such as Libertador and Manuela Pedraza or the Dot pole, new buildings in Palermo, are the ideas that prevail today and on which we must bet,” adds Faigenbaum. Today the value of a square meter of a class A office -of a very high level- is between US$4,000 and US$4,500, obtaining good income never less than 5%, annually, in dollars.

On the other hand, Salvatore puts on the table another business he is betting on with the development he is carrying out in Vaca Muerta. ”It is a business that leaves an income of between 8% and 12% per year in dollars, renting the residential building directly to companies with a five-year contract”, details. Its business model is to offer a hotel service or apart with services: “At Añelo, seeing that there was a need, what we ended up doing was developing, designing, building and creating a service company that does the hospitality to close this deal, and for the investor to earn a monthly canon, which today is very attractive”, adds Salvatore, who is advancing in the construction of the second building and which will be completed in a year. “We already have it rented from month 14, with which the investor enters with guaranteed income”advances and compares it with the business of the multi-family from United States. “These companies have come to Latin America and made huge investments in Mexico, Brazil, Chile, they are entering Peru and Colombia, why don’t they enter our market,” questions Faigenbaum, and concludes, “because the rental law applied to rentals residential makes it very difficult. What Idero does is the first tip of the business of multi-family in Argentina, which is exploding in the world”.

See also  TAKEOVER IN THE COCKPIT: Apple takes its ease in our cars

At the end of the talk, and when asked what motivates them to continue in this context, Costanza replied: “We do everything for the desire to move forward, to grow, I have the question of my children all the time in relation to leaving or stay, and we have to do our bit every day. The country is moving forward real estate goes forward, the business opportunities that exist throughout Argentina -many more in the interior than in the Capital- makes the medium and long-term outlook very optimisticdespite the permanent bombardment we have with the real news in the economic world today”.