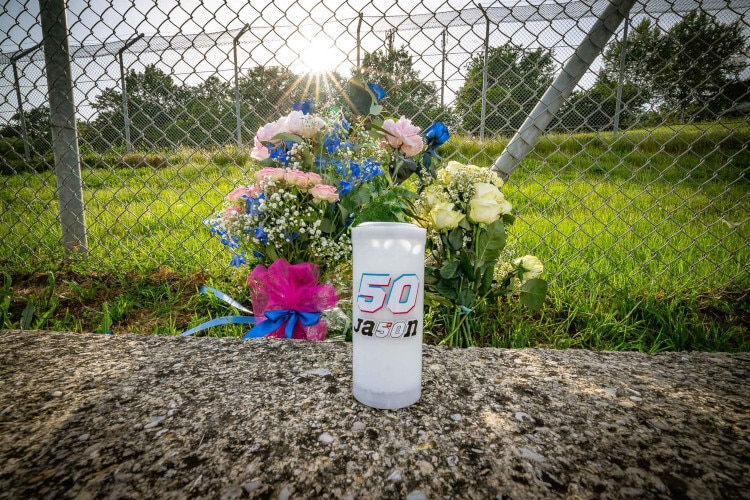 Today, May 30th, marks the first anniversary of Jason Dupasquier’s death. In Mugello, not only his PrüstelGP team reminded of the talented Swiss, who was only 19 years old.

Fabio Quartararo took a flag with the inscription “Ja5On, always in our hearts” with him on the cool-down lap after his second place in the MotoGP race on Sunday.

Of course, Jason Dupasquier has a very special place in the heart of the PrüstelGP team, which on Thursday – without much fanfare, as requested by the Dupasquier family – placed a candle and flowers at the track where Jason had a tragic accident a year ago.

“We all miss you so much. We hope you’ll be watching over us in racing heaven,” was the message from the Saxon racing team to the Moto3 talent who died much too early. They were joined by some of Jason’s former teammates and friends such as Barry Baltus, Filip Salac and Miquel Pons.

The “Ja5On” lettering is always included with PrüstelGP and is emblazoned on the team truck or on the team members’ ID cards.

Jason’s starting number 50 was withdrawn by Dorna last year at the German GP at the Sachsenring and may no longer be assigned in the Moto3 class.

After a difficult first Moto3 World Championship season 2020 without winning a point, Jason made a rapid improvement: The Swiss had realized that he had to work harder if he was at the top of the hotly contested 250cc single-cylinder four-stroke class establish and wants to prevail against the strongest opponents from Spain and Italy. He had therefore decided to raise his performance to a higher level and to make some sacrifices.

His family, father Philippe and mother Andrea, therefore took up residence in southern Spain in the winter, where Jason used to train almost every day with various motorbikes, racing bikes and mountain bikes when the weather was better. Papa Philipp Dupasquier, now 47 years old and once fourth in the 1/8 liter Motocross World Championship, was convinced of his son’s talent and supported him with all his might on his way to the top of the world.

At 17, Jason had finished eighth overall in the 2019 Red Bull Rookies Cup. At that time he achieved two fifth places as the best result of the season and was then promoted to the World Championship by PrüstelGP. The Swiss entrepreneur Olivier Métraux, whose father Michel founded the IRTA team association, joined Prüstel with his company CarXpert as the main sponsor.

In fact, Jason Dupasquier (he made his debut in Qatar in 2020 in the Moto3 World Championship) made the long-awaited breakthrough at the first five Grands Prix in 2021: in Doha, he finished in the points for the first time on his KTM at the season opener – and right away in tenth place. At the Spanish GP 2021 in Jerez he should show his personal best in seventh place. The best Q2 result was ninth place at the second Qatar GP on April 3, 2021.

The consistency of the promising western Swiss, who was also under the wing of Tom Lüthi on his debut in the World Championships and was considered the greatest Swiss GP hope for more than 15 years, was impressive: Jason ended up with the from Qatar to Le Mans a total of five races on positions 10, 11, 12, 7 and 13 (in the rain at Le Mans). He came to Mugello as a strong tenth in the World Championship and was sensationally fifth after FP3.

But then the fateful qualifying accident happened on the afternoon of May 29, 2021: In the closing stages of Q2, Dupasquier fell heavily in the fast “Arrabbiata 2” corner and was run over by Ayumu Sasaki, who was following behind. The young Swiss suffered polytrauma. Despite their best efforts, the doctors at Florence’s Careggi hospital lost the fight for his life a day later. Jason was only 19 years old.

A year has passed since then. But the memories of Jason Dupasquier remain, in the paddock and beyond.