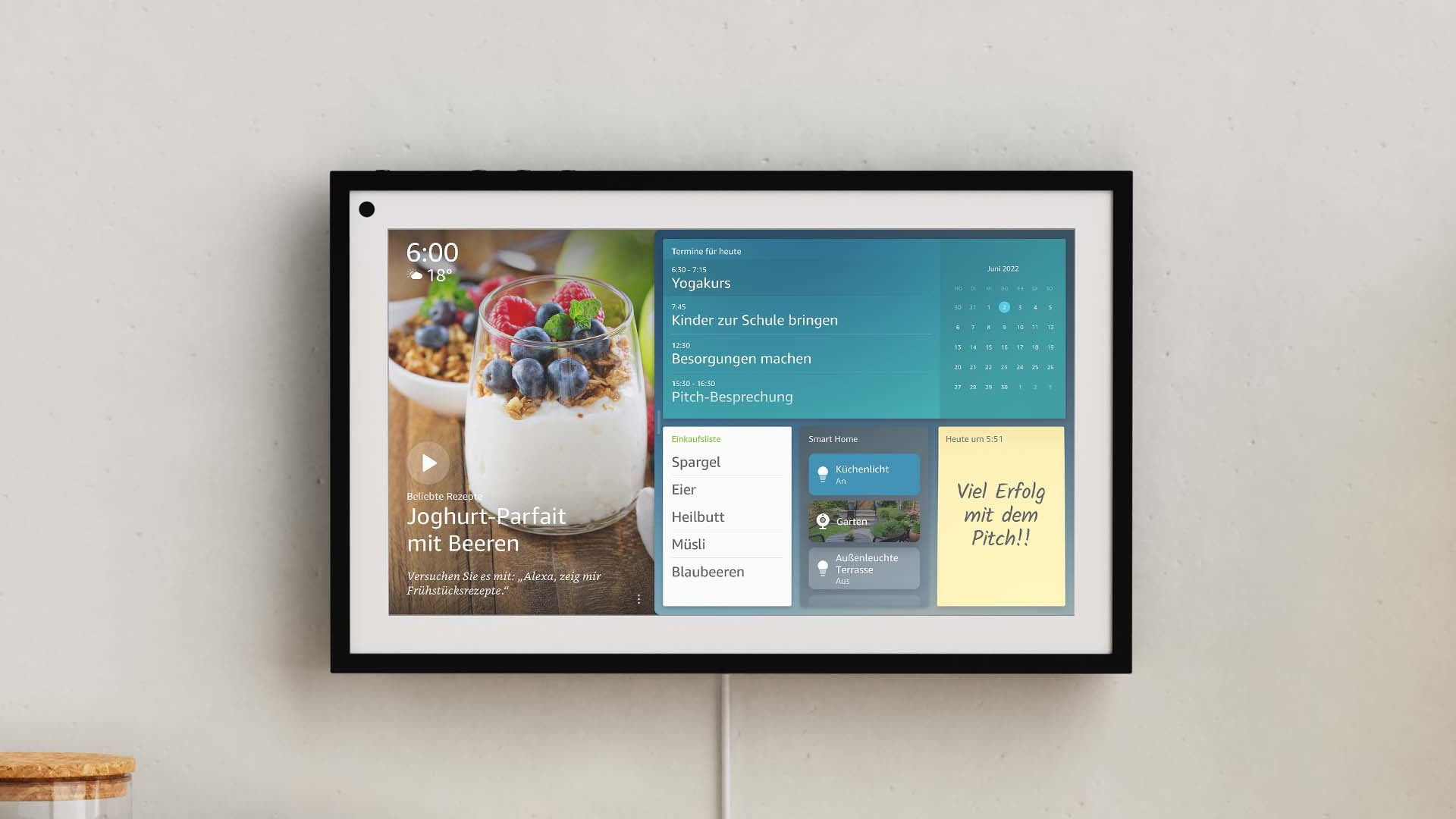 One step forward, two back

The article can only be displayed with activated JavaScript. Please enable JavaScript in your browser and reload the page.

Echo Show 15 is the largest Alexa display to date and is wall-mountable for the first time. Are Visual ID and Alexa widgets convincing or do you just get more of the same?

Alexa is everywhere. I can hardly imagine areas of application for which there is no suitable Echo device. With Echo Show 15, Amazon continues to pursue its product strategy and closes a supposed gap. The largest echo display to date can be mounted on walls and is intended to appeal primarily to multi-person households with new smart functions. Our test shows whether Echo Show 15 is a useful extension for Alexa smart homes.

Review of Echo Show 15 in a nutshell

In the Echo Show 15, Amazon does without many camera features that are already known from the predecessors, installs weak loudspeakers with miserable sound and does not consistently complete many good ideas. The new features around Visual ID and Alexa widgets supplement the start screen in a useful way, but the widgets still have significant weaknesses. The bottom line is that Amazon is adding the Echo Show 15 to its range, an expensive wall-mounted smart home dashboard that aims to be more of a family organizer than a multi-function smart display. At the end of the article you will find a detailed conclusion.

Echo Show 15 on the wall: disillusionment is spreading

The unique selling point of the Echo Show 15, which is obvious at first glance, is the possibility of wall mounting. The Alexa display can be attached to the wall like a picture frame in portrait or landscape format. However, the whole thing doesn’t look quite as elegant as expected. The black frame is not flush and protrudes about two centimeters from the wall. The reason for this are the two 41 mm loudspeakers, which are built into the housing on the left and right and are directed at an angle towards the wall. Of course, the cable also has to go somewhere and reduces the overall picture. The only thing that helps here is a bit of manual work and a cable duct in the wall. 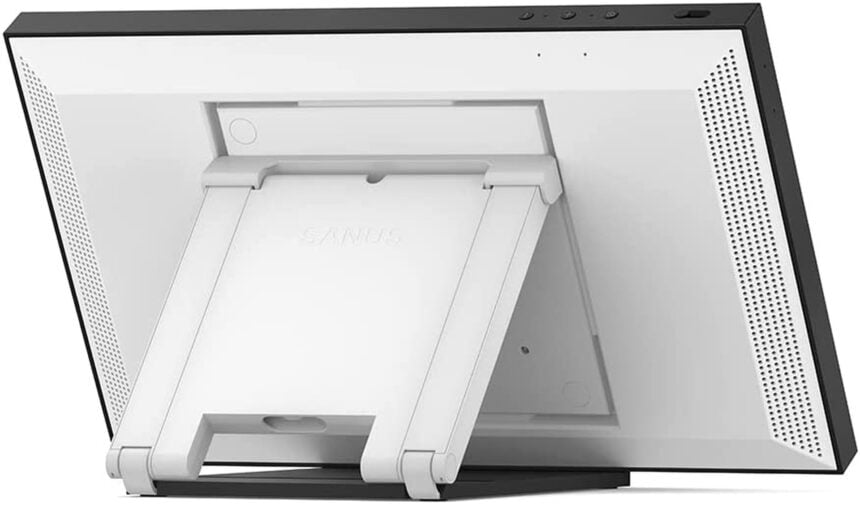 The optional stand for Echo Show 15 is high quality, only the rubber surface is difficult to clean. | Image: Amazon

Amazon also offers an optional stand for the Echo Show 15, which is screwed to the back of the device in a similar way to the wall mount. The stand is covered in a soft rubbery plastic that attracts dust like a magnet and is difficult to clean. A feather duster alone is not enough here. With its largest Alexa display to date, Amazon is convincing in terms of sharpness and responsiveness. However, if you hang up the Echo Show 15 in very bright rooms, you will quickly be bothered by the strong reflections on the display.

The built-in speakers are the biggest disappointment since I’ve been testing Echo devices. Amazon uses the same speakers here as in the small Echo Dot. Listening to music is not a serious option with the Echo Show 15. Everything sounds tinny and bass is non-existent. Although only one of these speakers is installed in the Echo Dot, the small ball delivers a rounder sound than the wall model, which costs 250 euros.

Amazon also saves on the camera and relies on 5 megapixels. For comparison: Echo Show 10 offers a 13-megapixel camera. The smart features like automatic zoom and face recognition of the “little” Echo Show siblings are also missing. Why?

As a pure smart home dashboard, some of the Alexa display shines with new functions. Alexa uses Visual ID to recognize who is standing in front of her. Speech AI greets me and only displays content intended for me on the screen. This includes calendar entries, reminders, music or sticky notes created for me from the Alexa widgets.

Visual ID recognizes you via the built-in camera and immediately displays personal content on the Echo Show 15. | Image: Amazon

Alexa takes photos of my face from different angles for automatic recognition. Setup takes less than two minutes and, thanks to the new processor, should run entirely on the device. According to Amazon, no images migrate to the cloud.

I can only create voice and face profiles on the device itself. The Alexa app allows me to enter user profiles, personal calendars and nicknames, and relationships between household members. Visual-ID worked reliably in the test and was able to distinguish me from my wife on a regular basis. However, Amazon states that there may be inaccuracies for people who look very similar.

Amazon has also come up with something new for the start screen. Users can distribute various Alexa widgets, which basically work like the well-known widgets on smartphones. From the gallery, I can select up to six Alexa widgets at the same time, which are placed on the right half of the home screen. If I have created different profiles, the contents of the widgets are based on the saved user profile using Visual ID and Voice ID. 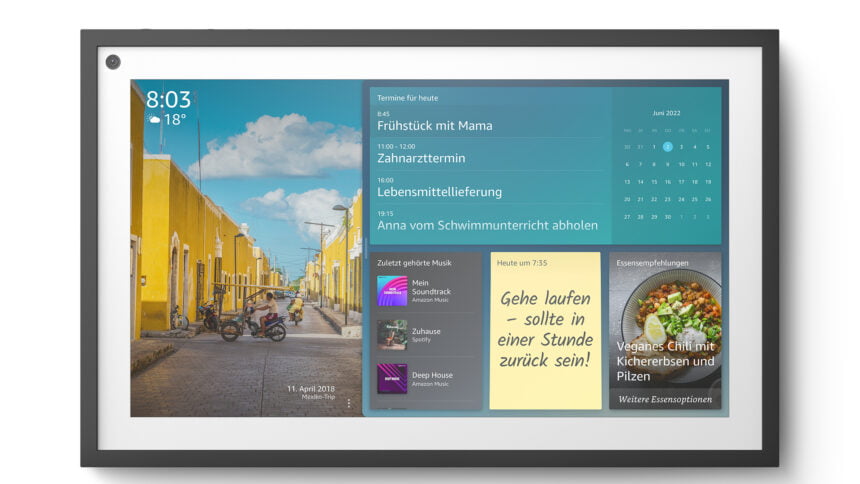 A distinction is made between small and large widgets, with the large ones having a special feature that is not entirely understandable: A large widget occupies three spaces. Although theoretically there would be space for one large widget in the top and bottom rows, Echo Show 15 prevents me from placing two large Alexa widgets at the same time.

As a result, I always have to choose between the large calendar and the large music widget. The latter is limited to Amazon Music, by the way. Spotify, Deezer or Apple Music customers get nothing here. It is also annoying that there is an ugly gap in the grid when there is an odd number of widgets arranged.

At the start of the day, I can see my upcoming appointments, to-do and shopping lists or the weather forecast for the next few hours at a glance. I can pin small digital reminders or messages to the Alexa start screen using the sticky note widget.

There are smart home favorites for controlling the networked home. Here, Alexa lists the most used smart devices, which I can quickly turn on and off with a tap of the icon. There are currently thirteen Alexa widgets, counting small and large versions of Calendar and Music.

In addition to the widgets already mentioned, there are favorite photos, suggestions for recipes or Alexa functions and a reorder widget. Consumables that I often order on Amazon are suggested here. It is possible that Amazon will add even more widgets via software updates.

Conclusion on Echo Show 15: The compromise among Alexa displays

Echo Show 15 is a compromise. The larger display is sufficiently sharp, but reflects very strongly. The powerful AI chip AZ2 enables useful functions such as Visual ID and the practical Alexa widgets. In return, there is a slimmed-down camera without the features already known from the other Echo Show devices and poor speakers in the frame. The sound is a disaster.

The wall bracket is well thought out and easy to attach. However, the construction of the Echo Show 15 does not allow for an elegant overall picture on the wall and the optional stand is practical but a dirt magnet.

Echo Show 15 should be seen more as an addition to an existing Alexa smart home than a multifunction smart display. It primarily wants to be a smart home dashboard and organizer for the whole family. The Alexa display is suitable for briefly checking the calendar or the traffic situation and to see who is at the front door via video stream. The new features around Visual ID and Alexa widgets serve this purpose and enhance the home screen.

If you are looking for exactly that, the Echo Show 15 is a good choice. However, you don’t get a full-fledged all-rounder for the smart home here, which makes the RRP of almost 250 euros too expensive. Instead of consistently continuing on the good path of the Echo Show 8 (2nd generation) and Echo Show 10, Amazon is only delivering another Echo device with the Echo Show 15, not a better one.

You can buy Echo Show 15 here

Note: Links to online shops in articles can be so-called affiliate links. If you buy via this link, MIXED.de will receive a commission from the seller. The price does not change for you.