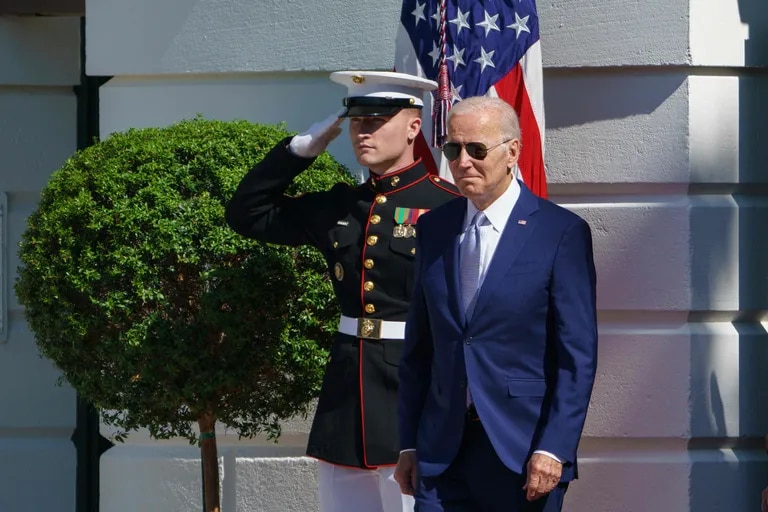 On a positive streak, Joe Biden took a new stance that may be a turning point in his presidency

WASHINGTON.- The North American president, Joe Bidenspent Saturday sitting by the pool at the White Houseenjoying the Washington heat and in telephone contact with senators from his party, while his long overdue economic agenda was about to be voted on in the Senate.

It was an exciting and fragile moment at the same time, and Biden – who had prudently stayed out of the negotiations – did not want to leave anything to chance. Among others, Biden reached out to Democratic Senators Mark R. Warner (Virginia), Amy Klobuchar and Tina Smith (both Minnesota), encouraging them to move forward and praising his work with the final details of the law on health, taxes and climate change which is the centerpiece of his government’s domestic agenda.

On Sunday finally the Senate approved the law and thus Biden capped a remarkable three-week hot streakduring which important laws were approved to help military veterans with health problems and to encourage the manufacture of microchips, historical figures for job creation were known, sustained drops in the price of gas were recorded, progress was made in the greatest NATO expansion in decades, and the United States achieved its long-delayed goal of assassinating al-Qaeda’s leader. Biden’s package of economic laws will arrive in the House of Representatives on Fridaywhere Democrats are confident they have the votes to pass it.

But hot streaks have not been the norm for Biden, who faced rock-bottom popularity levels and a cascading succession of crises. His supporters say that now the challenge for Biden is to turn this favorable streak into a turning point to relaunch his administration and motivate the Democrats, so that it is not diluted as a fleeting rise in expectations within a complicated first term. To achieve this, Biden must convince the electorate that the advances of these weeks are good not only for his government, but for the American people.

recent successes “they got the Democrats to turn a category 5 storm into a category 3”says David Axelrod, a former adviser to Barack Obama. “The difference is huge.”

But that difference will only matter if the Democrats manage to hit the Republicans where it hurts the most. “Democrats have made some really significant gains in recent weeks, but it’s important that they weigh those gains against the growing image of the Republican Party as a hostage to extremists.”Axelrod says. Republicans have suffered the knock-on effect of their opposition to capping the price of insulin and their initial blocking of the veterans’ health law.

Passage of the budget bill, Biden’s most resounding victory, was a result of his decision to walk away from the issue and let senators negotiate among themselves, instead of playing a leadership role, a difficult position for a self-proclaimed master in handling the Senate. In December, when previous negotiations with Democratic Senator Joe Manchin III fell apart, Biden ordered his aides not to reveal details of any of his interactions with members of Congress and thus remove himself from the public eye.

“One of the great lessons learned was to recognize the mistake of letting negotiations with senators dominate the public conversation, because it put disagreements over minutiae and not over the impact those laws would have on the life of the community center stage. people,” says Jen Psaki, a former press secretary in the Biden administration. “Sometimes the best things happen without people knowing about it.”

In addition, Democrats are hopeful that the Supreme Court’s decision to overturn the Roe v. Wade ruling – which guaranteed abortion rights – will encourage voters alarmed by what they see as an extremist drift by the Republican Party, a hope that is it was reinforced by Kansas voters’ recent rejection of an anti-abortion measure.

Democrats also say the budget bill, which contains incentives for renewable energy development and allows the Medicare health system to negotiate drug prices, will be a relief for the pocket of many North Americans.

“It is the most significant action that Congress and the president can take to tackle inflation and bring significant relief to American familiesas is the approach to drug pricing,” says Brian Deese, director of the White House National Economic Council.

Republicans, however, say that in the short term the bill will not lower over-the-counter prices and that the only thing the minimum corporate tax included in the rule will do is hurt the economy.

Senator Klobuchar said that the missteps of the Republicans and the gains of the Democrats have changed the political climate in the country.

“Two things are happening at the same time” Klobuchar says. “On the one hand, the veil has been lifted on part of the Supreme Court and on Republican extremism. And at the same time, the government is doing the basic things that need to be done to solve people’s problems.”

While the Capitol was the scene of frantic negotiations, an event was taking place in Kansas that no one saw coming.

On August 2, the voters of Kansas had to decide on the proposal to eliminate from the Constitution of that state the guarantees that protect the right to abortion, the first political test on the reaction of the electorate to the “Dobbs ruling” of the Supreme Court. The Democratic National Committee used part of its army of volunteers to organize in Kansas to prevent Biden’s involvement from turning the issue into a broader national controversy that would rankle voters in that staunchly Republican state.

Unexpectedly, Kansas voters flatly rejected the measure: About 60% voted to keep abortion protections. Turnout in the primary elections far exceeded other electoral contests in recent yearsand now Democrats are hoping the issue will also nudge voters in the midterm elections scheduled for November.

On Sunday afternoon, finally, and several hours after Biden arrived at his Rehoboth Beach home, the Senate passed the health and climate change package bill long desired by Democrats.

In a sense, the foundations for that achievement were laid several months ago. In January, when Biden held a news conference to mark his first year in office, his response to a reporter’s question was an explicit acknowledgment that he had made mistakes and was determined to take a different approach to government.

“People don’t want me to be the ‘President Senator.’ He wants me to be president and senators to be senators.”Biden said. “If I have made a mistake, it is because I am used to negotiating to get things done, and it can be said that in the past I have been quite successful in the Senate, and also as vice president. But I think the president has a different role.”