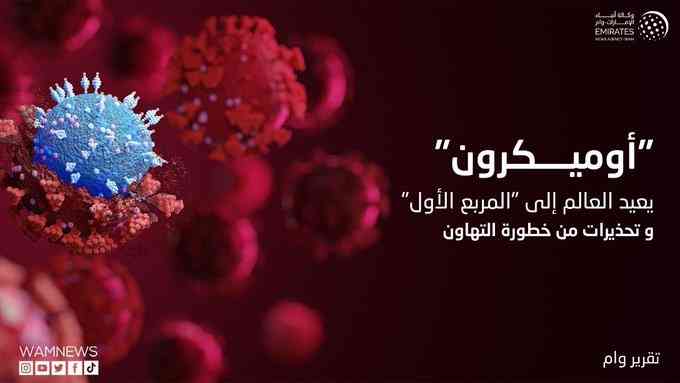 “Omicron” .. Warnings against going back to square one

The health conditions and the high number of infections with the Covid 19 virus around the world, during this period, seem like a return to “square one” in the journey of confrontation with the epidemic, which returned to record records in the number of infections and deaths during the past days, especially with the emergence of the Omicron mutant, whose speed was estimated Its spread is “seventy times” the speed of the spread of the previous mutant.

And health authorities in various countries called for tightening the procedures and restrictions related to movement, with mounting warnings of the possibility of the return of manifestations of ban, remote work and other manifestations that accompanied the height of the spread of the virus in the previous stages.

Most health authorities around the world stress a set of steps that will accelerate the control of the disorder caused by the “Omicron” mutant, foremost of which are supportive doses, wearing a mask, applying physical distancing, adhering to a healthy lifestyle and focusing on the educational aspect and confronting intimidation and misinformation about the virus. .

With the continued emergence of new mutants from the virus, many countries of the world have resorted to adopting supportive doses of Corona vaccines, with the aim of enhancing the immune response of community members and maintaining their high levels, especially after studies have proven that the rates of antibodies in the grafted human body decrease over time and from here The importance of a booster dose to boost immunity is especially important for the elderly and those with chronic diseases.

And the numbers of large infections that the world has recently recorded since the emergence of the Omicron mutant has proven that wearing a muzzle and strict adherence to the rules of physical separation is no longer an option, but rather an imperative to break the cycle of the new wave of the virus, as many countries that eased their precautionary measures in the last period announced the imposition of restrictions and a package. Strict measures.. In Austria, for example, new quarantine rules were announced, tightening the use of the muzzle, applying physical distancing, and strengthening control in shops to prevent entry of unvaccinated people, to combat the outbreak of the new mutant, and in Germany, it was agreed between state governments and the federal government to tighten entry procedures. Public places such as restaurants, cafes, etc.

The World Health Organization and many research studies confirm that a healthy life based on exercise, eating healthy food, and avoiding psychological stress represents a major work in raising the body’s immunity and resistance to the virus and plays a major role in mitigating the severity of the repercussions of infection and speeding recovery from it.

The organization called on the public to confront the emerging corona virus (Covid-19), through several main steps, including adopting an integrated diet, drinking enough water, exercising, and getting an ample amount of sleep, in order to maintain the general health of the person and increase his psychological immunity.

Since the emergence of the Omicron mutant, the world has witnessed a rapid spread of rumors and false news and a state of intimidation and exaggeration of the symptoms it causes and their seriousness, which the World Health Organization and independent doctors considered unacceptable.

Doctors confirmed that awareness rates will be a decisive weapon in confronting the virus during the coming period, as Dr. Adel Sajwani, a specialist in family medicine, said that excessive anxiety and exaggeration in fear may cause health problems even more dangerous than infection with the virus itself, and at the same time Sajwani warned against exaggerating indifference and lack of attention. Adherence to health instructions.