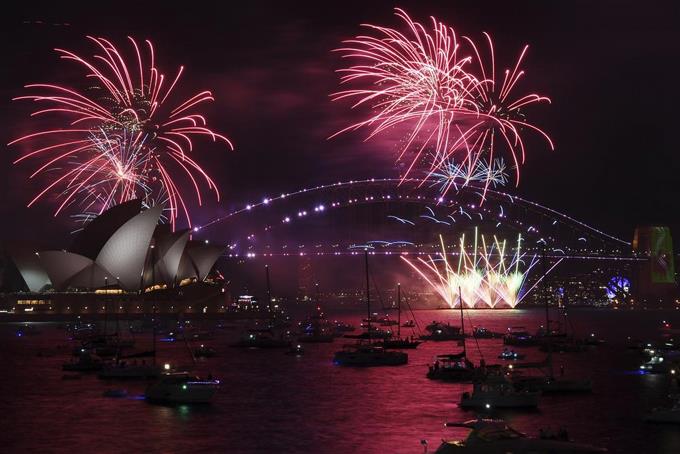 Ómicron silences the arrival of the new year around the world

This was the general sentiment on Friday as the world began to welcome the new year.

In many places, plans to celebrate New Year’s Eve were silenced or canceled for the second year in a row due to the rebound in coronavirus cases, this time driven by the more contagious omicron variant.

Even before the arrival of omicron, many people were happy to be able to say goodbye to another 12 months marked by the pandemic.

But, at least for the moment, the outbreak of the new variant has not caused the same level of hospitalizations and deaths as previous ones, especially among those who are vaccinated, offering a glimmer of hope for 2022.

New Zealand was one of the first places to celebrate the New Year with a low-key light show projected over Auckland’s most iconic landmarks such as the Sky Tower and Harbor Bridge, replacing its traditional fireworks display. Although at the moment it has not registered community infections of omicron, the authorities chose not to promote mass concentrations.

Neighboring Australia went ahead with the celebrations despite an explosion of infections. Some fireworks were launched at the beginning of the night so that the little ones could see part of the celebrations, the famous fireworks display from the Pier Bridge and the Sydney Opera House.

Hours before it began, health authorities reported a record 32,000 new cases, many of them in Sydney. As a consequence, fewer attendees are expected than before the pandemic, when up to a million people filled the city center.

Due to their location on the international date line, countries in Asia and the Pacific region are among the first to receive the year.

In Japan, writer Naoki Matsuzawa said he will spend the next few days cooking and handing out food to the elderly because some shops will be closed. He noted that vaccines have made people less anxious about the pandemic, despite the new variant.

“A numbness has set in and we are not too scared anymore,” said Matsuzawa, who lives in Yokohama, southwest of Tokyo. “Some of us begin to take for granted that it will not happen to us.”

Like many others, Matsuzawa hopes life will improve in 2022: “I hope the restrictions can be lifted.”

Many Japanese will celebrate the new year by traveling to spend time with their families. On New Year’s Eve, they flocked to temples and shrines, mostly wearing masks. Some seemed to ignore the fear of the virus, dining and drinking in central Tokyo and filling shops to celebrate not just the holidays but a sense of relief at the recent easing of restrictions on the virus.

In South Korea’s capital Seoul, the bell ringing ceremony to welcome the New Year was canceled for the second year in a row due to rising infections. Authorities said a prerecorded video of this year’s ceremony will be broadcast on television and internet. The cancellation of the massive event last year was the first since it began to be held in 1953.

In India, millions of people were planning to greet the year at home due to curfews and restrictions that prevented celebrations in big cities like New Delhi and Mumbai. Restrictions have been imposed to prevent partiers from going to restaurants, hotels, beaches and bars due to the incidence of the new variant.

In Hong Kong, some 3,000 people were scheduled to attend a New Year’s concert with local celebrities, including the boy band Mirror. The concert will be the first New Year’s Eve that has been held since 2018, after the cancellation of 2019 due to political disputes and last year’s due to the pandemic.

In China, the Shanghai government canceled its events, including a light show on the Huangpu River in the center of the city, which normally draws hundreds of thousands of spectators. In Beijing, where the most popular temples have been closed or have limited access since mid-December, there were no plans for public celebrations. The government has asked the population to avoid leaving the capital if possible and requires tests for travelers arriving from areas with outbreaks.