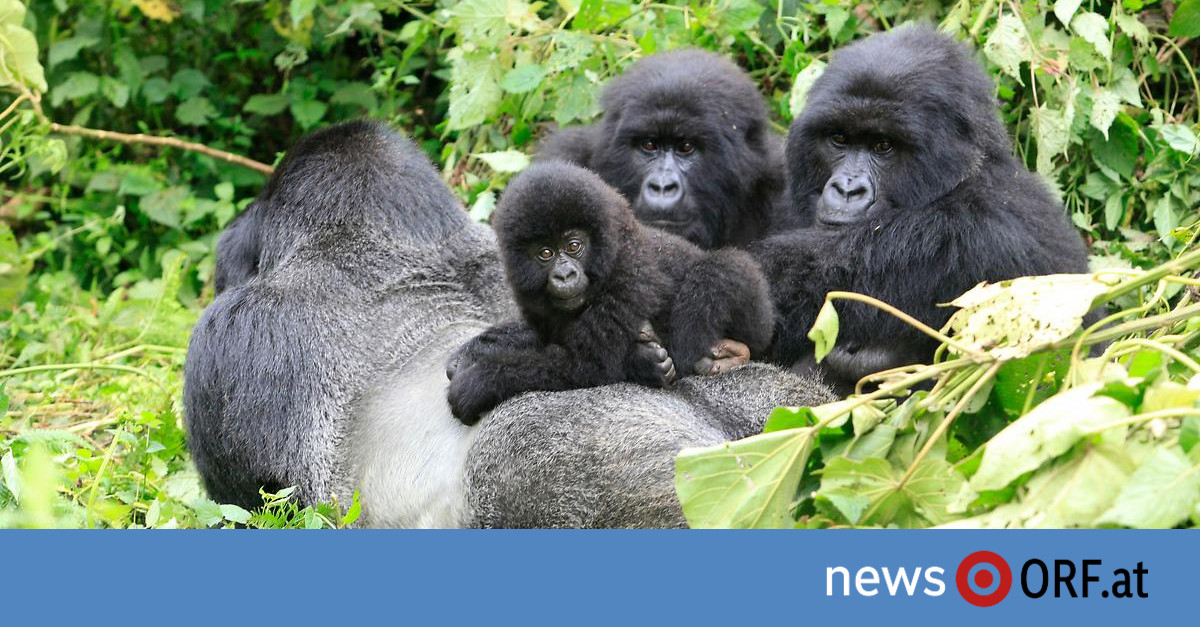 Oil production in the rainforest: mountain gorillas in DR Congo in danger

The national park is located in eastern DR Congo on the border with Uganda and Rwanda. The UNESCO World Heritage Site is known for the endangered mountain gorillas that only live in these three countries. It is estimated that there are still around 1,000 of these primates, a third of whom live in Virunga Park.

Now the endangered animals are once again endangered: the DR Congo is holding an extended auction in Kinshasa on Thursday and Friday, at which permits for the development of oil and gas can be bid for. The tender now includes 27 oil blocks and three gas permits, compared to a total of 16 concessions originally planned. Two of the added exploration blocks overlap with the national park.

Moore as a “carbon time bomb”

In addition, the development will also extend to the country’s moors, as the news platform Bloomberg reports. They are among the most important carbon sinks in the world, meaning they absorb more CO2 than they emit. The Congolese peatlands store around 30 billion tons of carbon – equivalent to around 82 percent of annual global carbon dioxide emissions. Sinks like the Cuvette Centrale help reduce greenhouse gas emissions from burning fossil fuels. However, large amounts of carbon dioxide could also be released if the bogs are disturbed. Activists therefore speak of a “carbon time bomb”.

With the now expanded auction, the DR Congo country wants to expand its oil industry, among other things. It currently produces only about 25,000 barrels per day (in comparison: Saudi Arabia is currently considering production of up to 13 million barrels per day). The country is said to be in talks about taking over the exploration blocks with various energy companies such as the French Total, the Italian ENI and the US giant ExxonMobil.

Didier Budimbu, the country’s oil minister, told Britain’s The Guardian on Monday that he understands environmentalists’ concerns but says natural resources are right to be used. “Our primary responsibility is with Congolese taxpayers, most of whom live in conditions of extreme insecurity and poverty, and seek the socio-economic well-being that oil exploration is likely to provide,” Budimbu said.

The income is also needed to protect the forest in the Congo Basin and to develop the country economically. The DR Congo is considered one of the poorest countries in the world. According to the World Bank, almost three quarters of the 90 million inhabitants lived on less than 1.90 US dollars a day in 2018.

Animal and environmental protection organizations and experts are nevertheless demanding that the auction be called off, and they have also called on the big oil companies to refrain from the auction.

Simon Lewis, professor of global change science at University College London, told The Guardian the Congo Basin is the worst place in the world to explore for oil and gas. “Opening up these forests for oil exploration will lead to hunting, deforestation, oil pollution, carbon emissions and social conflict. The oil auction is an auction to initiate a natural, health, climate and human rights disaster.” The oil production in the Niger Delta is a sad example of this. “The auction should be canceled,” Lewis said.

“This time we will not be stopped”

Greenpeace Africa’s Irene Wabiwa said the auction was a chilling attempt to monetize the country’s nature. It also completely undermines the government’s ambitions to position DR Congo as “a country with a solution to the climate crisis”. What is piquant about the auction is that President Felix Tshisekedi was among the signatories to a climate agreement at the COP26 climate conference last year.

With the document, more than 100 countries, including the DR Congo, committed themselves to stopping the destruction of their forests. Twelve billion US dollars have been budgeted for the project by 2025. 500 million dollars were earmarked for the DR Congo. The country has also made commitments to protect the forests and moors as part of the Central African Forest Initiative (CAFI). The conservationists fear that the promises can no longer be trusted.

But they hope that they can once again celebrate a success like 2015. Back then, the companies SOCO International (now Pharos Energy) and Dominion Petroleum abandoned their plans to take over blocks after public pressure. The Netflix documentary “Virunga” produced by Leonardo DiCaprio had contributed to this. But the government is likely to remain firm this time. Oil Minister Budimbu recently told the “Financial Times” that no Hollywood stars should get on “their high horse”. “This time we won’t be stopped.”