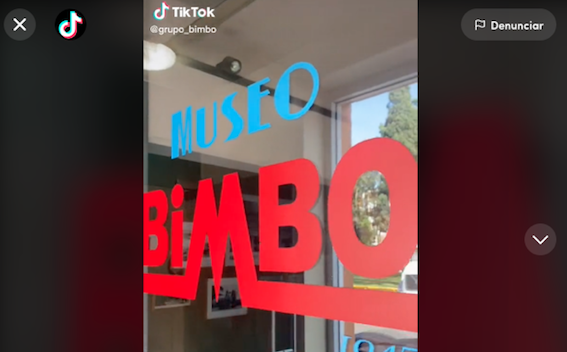 nostalgic bimbo; surprises the museum of the Mexican brand on TikTok

One more time, TikTok is the social network chosen by Bimbo to show a bit of what surrounds the company, as is the case with its museumwhich he makes known through a video of just 19 seconds.

The present dictates that, in terms of social networks, TikTok has earned a privileged place among Internet users; a platform that, in just five years since its foundation (2016), managed to exceed one billion monthly active users.

The numbers support it and, furthermore, the strategic alliances it has made with different platforms (as in the case of Vimeo) to support content creators who, likewise, have grown considerably in all these years.

From this perspective, then, it is not surprising that brands are now beginning to look towards the Chinese social network in order to integrate it into their marketing strategies in order to reach a new audience that, ultimately, shows a greater interest in this type of platform.

This is the case of Grupo Bimbo, a brand that, according to what we can see on its profile, not long ago entered the wide universe of the ByteDance platform.

They show the Bimbo Museum on TikTok

for now, The @grupo_bimbo account has just over 7,100 followers and an accumulated 31,000 likes. among his five videos that, for now, he has shared with users.

It should be noted that the presence of the brand in said social network has served, more than anything else, to share moments and/or details about what surrounds the company, such as its offices in Mexico, its arrival in India, part of the Marinela museum and even the Bimbo Bear museum.

In its most recent video, which lasts less than 20 seconds, the company shows what the Bimbo museum is like, a place where, as mentioned in the clip, “the most important moments for which this ‘great family’ has passed throughout history, from news, photos and documents” to the collections that the brand has launched.

Would you like to visit the Bimbo museum? #grupobimbo #foryou #fyp #parati #ellugarperfecto #history

The reaction of some Internet users has not been long in coming, mentioning that, of course, they want to know the Museum and, in fact, request details to be able to visit it.

Now, beyond the interaction it has achieved with a group of users, this shows how TikTok is an ideal window for companies to connect with new audiences.

And we cannot deny that the ByteDance platform is the social network of the moment, the favorite of the new generations and the one that has even set the standard to follow in terms of content creation.

In fact, official information indicates that in 2021, TikTok was the most searched website by Internet users, above Google, Facebook, Amazon, among others.