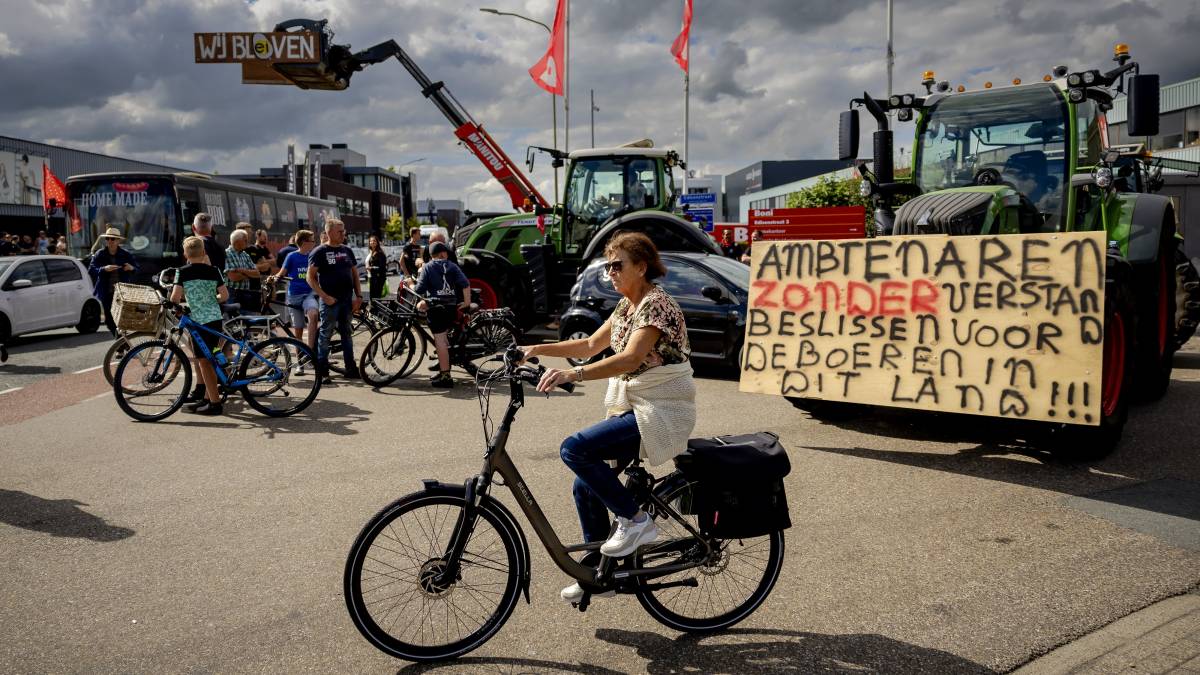 ‘No farmers, no food’? And other questions about the farmer’s blockades

The farmers’ protests of the past few days have caused a lot of stir and raise all kinds of questions. We answer four questions that readers ask us most often:

Why do farmers block distribution centers?

Farmers have been protesting for some time against the cabinet’s nitrogen plans, which mean that not all farmers can continue with their business. In recent days they wanted to show that without them the supermarket shelves are empty. And that if their companies have to disappear, it will affect everyone. †No farmers, no food“, say activists and that slogan can be read on banners and tractors.

“That is of course a very powerful argument, it touches on our deepest fears: that if the government goes through with these plans, we might run out of food,” says Jeroen Candel, associate professor of food and agricultural policy (Wageningen University) in the podcast. long story short from NOS on 3.

Will the food supply be in trouble if farms stop?

No, say experts. If the nitrogen plans go ahead and there are fewer livestock (now there are about 3.8 million cows and 11.4 million pigs in our country), consumers will hardly notice. The lion’s share of those millions of animals is exported. About 40 percent of the meat is now sold within the Netherlands, 60 percent is for export.

A reduction in livestock of about 30 percent, as the cabinet is aiming for, will “not have much effect” on our food supply, says Roel Jongeneel, assistant professor of agricultural economics (Wageningen University). “I do expect that exports will go back slightly, and prices will rise slightly.”

Laurens Sloot, professor by special appointment in retail entrepreneurship (University of Groningen), also does not expect empty shelves if the livestock population becomes smaller and there are fewer livestock farmers. “If you stop farming throughout Europe, then yes. But phasing out a little meat and milk in the Netherlands will not lead to empty shelves.”

The food supply is mainly threatened by climate change and the loss of biodiversity, says Jeroen Candel. “So it is very necessary that we now accelerate the sustainability of food production.”

Today there are empty supermarket shelves, especially those for fresh products. Due to the blockades, food could not be driven out of the distribution centers.

What do farmers see as a possible solution?

Farmers are vehemently against the cabinet plans and fear for their survival. They themselves propose other, less drastic changes.

The Agricultural and Horticultural Organization (LTO), which has about 35,000 members, presented a plan last year with Bouwend Nederland, VNO-NCW, MKB Nederland, Natuurmonumenten and Natuur en Milieu. This should achieve a “sustainable balance” between ecology and economy. The problem must be solved locally, with farmers participating rather than being “imposed from above,” it says.

LTO requested financial support for “innovation, nature-inclusive agriculture, agricultural nature management, for example voluntary relocation to future-proof locations or voluntary stopping.” That plan had not yet been calculated and legally tested.

In response to the appointment of Johan Remkes as a mediator, LTO said that they should be able to discuss the “real pain points” with him. “So about the goals, the timeline and the way in which reductions can be achieved.”

Other farmers want the nitrogen plans to be dropped altogether:

Who are the blocking farmers and who controls them?

They are members of the radical Farmers Defense Force (FDF), farmers’ action group Agractie, but also all kinds of other farmers. It is not known how many farmers are demonstrating and blocking. The police don’t keep track of this. “We focus on public order and criminal offences,” said a spokesman.

In any case, ‘professional demonstrators’ have joined the farmers, reported news hour last week. According to national police commander Willem Woelders, these include people who protested against the corona measures during the pandemic and activists from the extreme right.

Activists communicate with each other in all kinds of app groups. Who is organizing the blockades is not public, but farmers’ action groups announced them in advance. For example, the FDF leader spoke on Sunday about an upcoming ‘mega protest’. “The turnout is going to be very large, but the Farmers Defense Force is of course not organizing anything at all,” said Mark van den Oever.

View below an explainer we made earlier about the nitrogen crisis and measures against it:

What is nitrogen and why is it a problem?