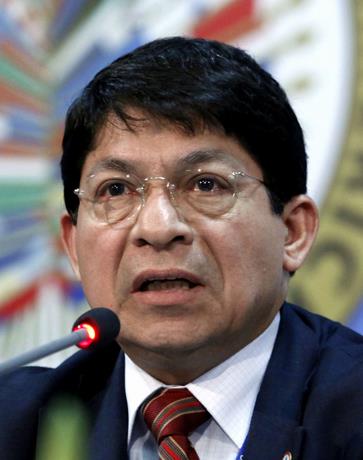 Nicaragua protested this Monday “vigorously” over the “unusual statements” of the Dominican Republic, which on Sunday condemned the arrest, in recent days, of two presidential candidates by the opposition in the Central American country, which will hold general elections on November 7 .

“In the face of his unusual statements on internal affairs that only concern the people and Government of Nicaragua, we energetically protest in the name of decency, sovereignty, non-interference, non-interference, and non-interference, which according to all the International Letters that they govern sovereign life between states, we owe each other, “said the Nicaraguan Ministry of Foreign Relations.

In the note, signed by Nicaraguan Foreign Minister Denis Moncada and addressed to his Dominican counterpart, Roberto Álvarez, the Executive indicates that “the people and Government of Nicaragua demand that the Government of the Dominican Republic respect our national sovereignty, as well as the constitutional processes, institutional, legal and national, which we develop according to our sovereign, State and Government concepts and practices “.

The Dominican Foreign Minister said yesterday on his official Twitter account that “the arrests of the presidential candidates Cristiana Chamorro and Arturo Cruz in Nicaragua are harassment by the opposition before the presidential elections in November.”

“These undemocratic measures indicate the creation of an environment of intimidation and intolerance,” he said in a first message.

In a second publication, the Dominican minister stated: “The charges against Chamorro and Cruz and the cancellation of the legal status of the only opposition party that the National Coalition had to confront President Ortega point to the elimination of all democratic opposition. We urge liberation of Chamorro and Cruz “.

See also  The ceremony gets underway: it starts with the awards ceremony - Look at the gallery - Photo 1 of 3

In its note of protest, the Nicaraguan Foreign Ministry said that it “is powerfully conspicuous, and we must say that it fills us with shame, that a brave people, like the brother Dominican people, is humiliated in this way, because in their name they commit outrages and outrages to the sovereignty of brother peoples “.

Moncada affirmed that the “own sovereignty and independence” of the Dominican Republic “has been trampled and permanently outraged by empires, and in particular by the bloody impositions of puppet dictatorships, on the part of the United States of America.”

“Again,” he assured, “in the name of decency and appealing to the national decorum and honor of his people, which we hold so dear, we demand that his government respect Nicaragua.”

“The policy of submission to the empires only leaves the peoples, humiliated and offended by history and by the battles that for our independence and national dignity we are obliged to wage, in absolute commitment to truth, justice and the right of our citizens. peoples to live well and in peace, “he continued.

“The historical brotherhood between our peoples cannot be erased with shameful, degrading, hostile and servile political statements,” he concluded.

Cristiana Chamorro, daughter of former president Violeta Barrios de Chamorro (1990-1997) and the opposition figure most likely to win the presidential elections next November, has been held in her residence for six days after a judge ordered her arrest. and the search of the house for a case of alleged money laundering.

Meanwhile, Arturo Cruz, who was the Ortega government’s ambassador to the United States between 2007 and 2009, was arrested last Saturday at the Augusto C. Sandino International Airport, when he was returning from a tour of the United States, according to the Public Ministry, who He is investigating him under the assumption “that he has attacked Nicaraguan society and the rights of the people.”

The arrests of opponents who aspire to the Presidency occur five months before the general elections of November 7, in which Ortega seeks a new reelection for his fourth consecutive term and second with his wife, Rosario Murillo, as vice president.