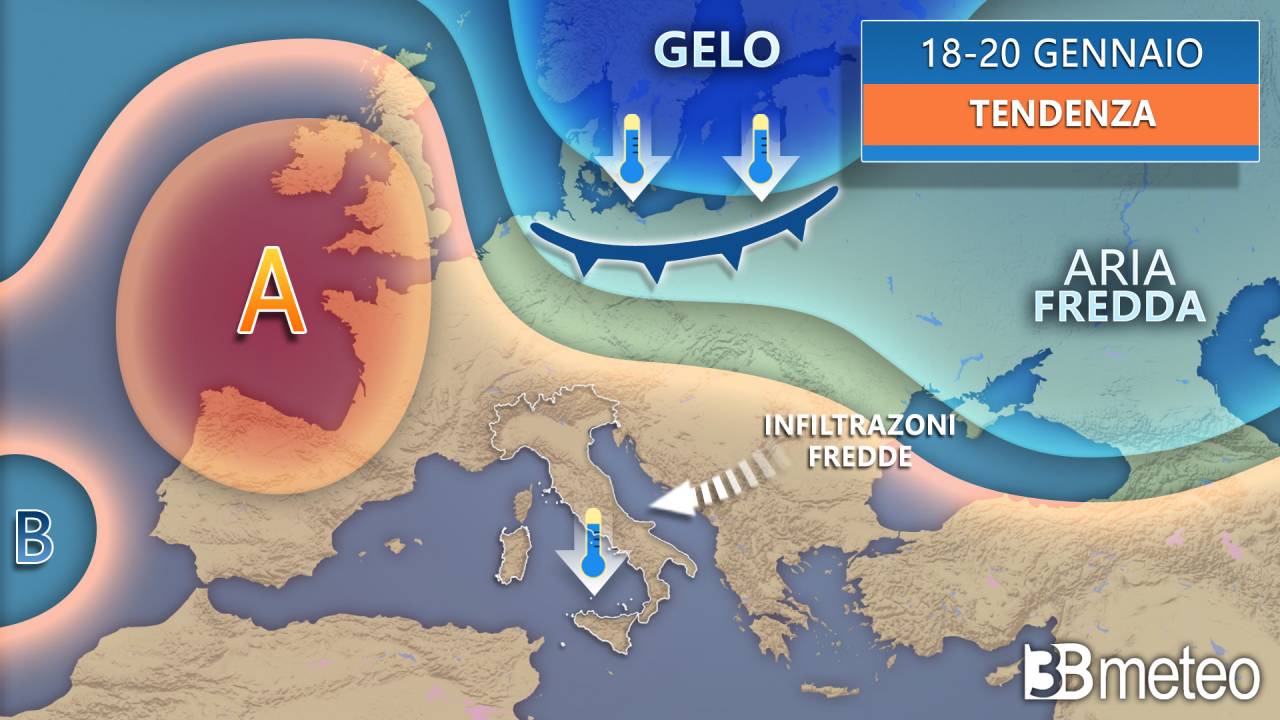 Next week between high pressure and cold infiltrations, then possible important news. This is what «3B Meteo

BETWEEN ANTI-CYCLONE AND COLDER INFILTRATION WAITING FOR A POSSIBLE TURN – The sub tropical anticyclone that will accompany us during the weekend will still have a certain importance at the beginning of the new week, especially in the central-western European sector from which it will be able to extend its influence to Italy. However, and this already starting from Sunday evening the cold northern currents associated with the Scandinavian sack will try to undermine it in all ways. In a first phase these attempts will not have a great success except on Monday when a modest unstable passage on part of the Peninsula is expected. Subsequently, the anticyclone will return to come forward but the maximum barriers will not be on Italy. This will allow cold air infiltrations from the Balkans which will bring temperatures back on average but will not have great effects in terms of cloud cover and much less phenomena. Thus we arrive at the weekend where we could probably have an important cold lunge towards Eastern Europe with a partial interest also from Italy. This, which is configured as a possible turning point, will still have to be evaluated well. But let’s go step by step:

MONDAY MODEST IMPULSE NSTABLE – A modest passage of clouds and some isolated precipitation, caused by the transit of the tail of a disturbance that will reach the Alps on Sunday, appears quite probable. The sliding of the front towards the Balkan area will stimulate some irregular cloud cover on the regions of the medium-low Adriatic side and on the lower Tyrrhenian Sea with some fleeting precipitation. This will also lead to a moderate drop in temperatures.

MORE ANTI-CYCLONE BETWEEN TUESDAY AND THURSDAY WITH COLD INFILTRATION FROM THE EAST – the high pressure area that had temporarily pushed further west will return to interest the central-southern European sector while still maintaining its maximum levels between the United Kingdom and France. This will characterize still stable weather on the Peninsula but with some infiltration of cold air from the Balkans, more likely to affect the central-southern regions. The climatic context would return to normal albeit with some exceptions which could mainly concern the western Alps.

BETWEEN FRIDAY AND THE INCOGNITA WEEKEND COLD AND SNOW: an ever greater decision of the Scandinavian depression could succeed in modifying the anticyclonic domination by forcing the Azorean cell to retreat towards the west. This would leave greater space for arctic currents towards the Balkan area with a possible involvement of Italy as well. If the trend is confirmed, a cold unstable front could affect part of the Peninsula leading sharply decreasing temperatures and snowfall down to low altitudes. Stay up to date and in the next updates we will be able to be more precise.