New pre-sale of the Argentine electric car TITO: how much will it cost

The evolution of titus electric car It does not stop and technical and bureaucratic advances will allow the first electric vehicles to be circulating in the city in a few more days.

This was confirmed to iProfesional by Juan Manuel Bareto, president of Coradir, the company that manufactures it, who anticipated that They already have all the licenses and qualifications for the patenting of the units in the Automotive Registry, the last step necessary to deliver the Tito to each of the buyers and start with a second wave of sales.

“We already have everything ready for the patenting of the vehicles. It only remains to deliver the Statute of Certificate of the company and next week the patents will come out. With that we will make the deliveries to the clients”, commented the manager.

Tito, ready to hit the streets.

This is the last step for this nationally manufactured electric car to be able to roll around the cities as long as the driver meets the same conditions as any other vehicle, which is to have suredriver’s license, etc.

More units of the electric car to sell

The first Tito sold in the country were about 200 that were marketed through an online pre-sale. The demand remained so active that they are about to launch a second presalewith the value of the vehicle in $15,000.

The calculations were growing month by month and for this year they have planned a production of 500 units, but since they have very good prospects and it is believed that once the cars are circulating on the street the demand will increase, since they are setting up another 3,000 m2 plant in San Luis to expand production.

“The demand for Tito was a real surprise, since it was sold out as soon as the pre-sale came out. The profile of the buyers, which is very varied, is also striking. There are 50% men and the other 50% are women. In addition, there are from 18-year-olds to 80-year-olds. All with the same ideology of environmental care, that if identifies them, “explained the manager.

Tito is a small car that is equipped with a 4.5KW asynchronous electric motor. It has a 2000-cycle lithium-ferrophosphate battery, whose full charge is completed between 6 and 8 hours, also allowing partial charges. His Plug with 3 flat legs, it is placed in a household outlet (Sheet 2073), like any appliance. The battery is produced by Coradir, while they will continue working on the national integration of parts, until reaching 80 percent.

As for its characteristics and data to take into account, the vehicle’s battery is lithium, 8 kWh and 2,000 charge cycles. This means that the battery is completely discharged 2,000 times and then recharged to 100%. This corresponds to a distance traveled of approximately 200,000 km.

Tito in his assembly process.

Recharging can be done in a standard 220V outlet, within 6 to 8 hours if the battery was completely discharged. The power is 4.5KW. As for the box, it does not require different gears, so it drives like a vehicle with an automatic transmission, with an accelerator pedal and a brake pedal.

It has a capacity for four people, works solely on battery power, and reaches a maximum speed of 65 kilometers per hour, logical for traveling the streets of any neighborhood. In dimensions, it measures 2.83 m long, 1.50 m wide and 1.56 high. In safety equipment, it does not have airbags.

See also  Demonstrators blocked the streets of Tbilisi: how are the protests against the Namakhvani hydroelectric power station going - Sputnik in Russian

As for the brakes, they are disc brakes on all four wheels, it has a rear view camera and parking sensors with a multimedia steering wheel. In addition, it has a 5-year warranty. A distinctive feature compared to other electric versions is its steel chassis and full sheet metal bodywork.

It has 12-inch wheels and a very sober interior, where there is only the steering wheel, the circular center console and a start & stop button, although it is turned on with a conventional key. It has a “wheel” with which the changes that are only direct, reverse and neutral are handled. The seats are made of leather, the rear ones are joined and reclining, in order to make the trunk more spacious, with a reduced space suitable for two boys.

In addition to the Tito car, the Tita truck is coming

In addition to telling how the progress with Tito is going, from Coradir they anticipated the status of Tita, the electric truck that is already a few steps away from becoming a reality.

This model is awaiting the final approval of the National Institute of Industrial Technology -INTI-, which would allow the second step towards production. 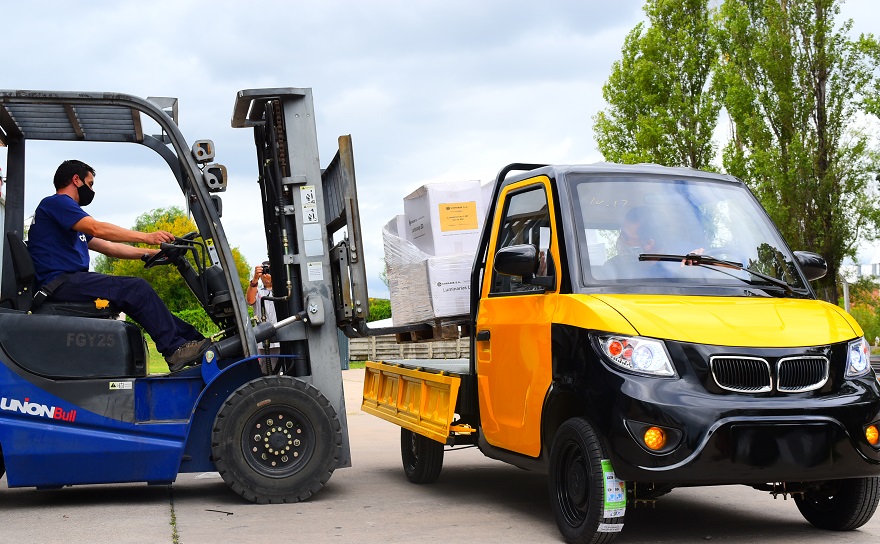 Tita, getting closer to her presale.

For now, the brand plans to manufacture about 100 units, which are already ordered for use in closed industrial parks.

As for the price, the Tita will have a value of US$17,500, as long as there are no major demands for change from the agency.

In addition to Tito, the electric car, and Tita, the truck that will be launched in 2022, both with a value of US$15,000, among the new products that the company plans to add to its product portfolio, the arrival of a large motorcycle, 100% electric, which is designed for example for the police, with a lot of power.

In this case, from Coradir they explained that they will not add scooters because the idea is to participate in segments that are not yet exploited, such as large displacement motorcycles.

They will also add electric bicycles and a tricycle, which is designed for mail deliveries, courier services and short trips in high-traffic areas.