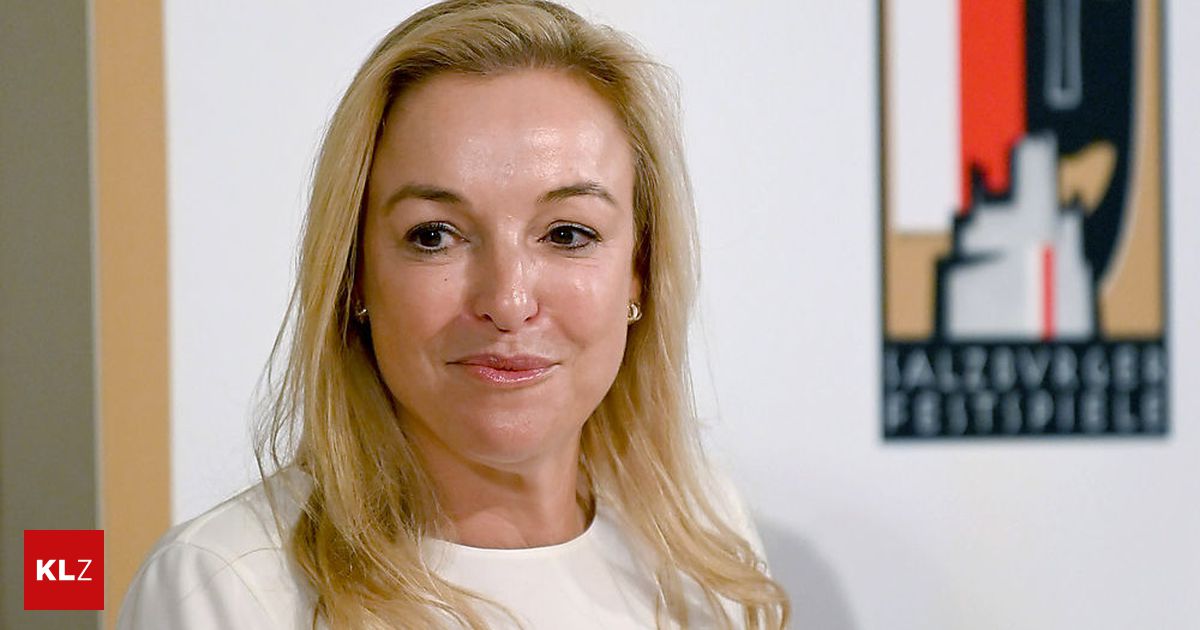 Corona has been raging for almost two years – and the virus will probably also cause turbulence and imponderables in the cultural and media business in the coming year. So not an easy debut for those personalities who will start a new management job in this area in 2022 compete. There are important changes in the executive suite at the Salzburg Festival, the Vienna Volksoper, the Museum Quarter and the ORF.

The surprise was quite big when the board of trustees at the end of November the trained lawyer Kristina Hammer as the new President of the Salzburg Festival selected The marketing expert, who worked for high-priced car brands, among other things, will now take care of the Festspiele premium brand from January 1st. As the successor to long-term president Helga Rabl-Stadler, who directed the fortunes of the festival for 27 years, Hammer will be a new addition to the three-person directorate for at least the next five years Artistic director Markus Hinterhäuser and the commercial director Lukas Crepaz to the side.

The Reichenau Festival is entering a new era. With the withdrawal of the founding couple Renate and Peter Loidolt at the end of the year, it now functions under Theater Reichenau and is equipped with a new organizational structure including the participation of the State of Lower Austria. Maria Happel, Actor and director of the Max Reinhardt Seminar, will take over the artistic direction there for three years at the beginning of 2022 and will present her first program (July 2 to August 6) in February.

The new Linzer Crossing Europe management duo is already in office, but also before its festival premiere. Sabine Gebetsroither and Katharina Riedler are responsible for their first edition of Austria’s second largest international film festival in spring 2022. In the coming year, however, the Grazer Diagonale and steirischer herbst will have to look for a new director. The diagonal tip Sebastian Höglinger and Peter Schernhuber This year it has been extended by another year to 2023 “in order to maintain the continuity of the festival in the ongoing crisis situation”. In the spring it should then be advertised. This happened recently at steirischer herbst. Whether Ekaterina Degot, whose five-year contract expires at the end of 2022, is applying again, has not yet been determined. However, the Ybbsiade 2022 will get along without any artistic directorship after it Joesi Prokopetz has withdrawn from this position and it has been decided not to fill it for the time being.

New top staff is also scraping the starting blocks in the museum area. To a certain extent, at the last minute it was not until mid-December Bettina Leidl the new managing director of the Museumsquartier announced. She will be the agendas of February 14th Christian Strasser take over. However, since his contract was terminated at the end of 2021 – Strasser moves to the top floor of the Sozialbau AG – the authorized signatory manages Silke Raßmann the cultural area on an interim basis from January 1st and until mid-February. With the castling, the Kunst Haus Wien now has to look around for a new management. Finally, with Leidl’s move to the MQ, the director’s post there becomes vacant.

In the Jewish Museum Vienna, on the other hand, Danielle Hopes unsuccessfully applied for a continuation of the line. She will be in July after twelve years of Barbara Staudinger, currently director of the Jewish Museum Augsburg, was replaced. The Academy of Fine Arts will receive this from January Sabine Folie, formerly chief curator of the Kunsthalle Wien, a new director for the art collections – i.e. the picture gallery, the copper engraving cabinet and the glyptotheque. The Salzburg Mozart museums also receive Linus Klumpner a new leader. The art historian, who already worked in the Belvedere Palace and as a supervisor of the culture bearers in the cabinet of the then Foreign Minister Alexander Schallenberg (ÖVP), will follow in January Gabriele Ramsauer. In Lower Austria Gerda Ridler new artistic director of the Landesgalerie in Krems at the beginning of the year and inherits Christian Bauer.

In some large companies, however, they rely on continuity: That’s how it was this year Stella Rollig reappointed as Belvedere General Director as well as Johanna Rachinger as head of the Austrian National Library and Monika Sommer as head of the House of Austrian History, which is organisationally located there. All three contracts would have expired in 2022.

In the (music) theater area, the most important castles of the coming year of the Vienna Volksoper and the Theater an der Wien are in the house. Takes over at the beginning of the 2022/23 season Lotte de Beer from Robert Meyer – he had unsuccessfully applied for a renewed extension – the venue on the belt. The native Dutchwoman, born in 1981, has a five-year contract. As of September 1st, the designated boss will also have a new music director, the Israeli conductor, on her side Omer Meir Wellber. At least one familiar face on the management floor will remain at the Volksoper: Christoph Ladstätter, Commercial director since 2007, was extended until the end of August 2027. In the Theater an der Wien, however, takes over Stefan Herheim by Roland Geyer the director’s scepter – or more precisely in the museum quarter. The traditional stage will eventually move there by 2024, while the main building is closed for general renovation.

The Festspielhaus St. Pölten will soon dedicate itself to contemporary dance a little more intensively. At least the future artistic director has Bettina Masuch, who is currently still director of tanzhaus nrw in Düsseldorf and will take up her new position in autumn, has announced a “slight shift in emphasis” in this regard. From the coming season, women’s power will also be the order of the day at the Phönix Theater in Linz. There is the co-founder and long-time director Harald Gebhartl in front of the pension. Successor Silke Dörner, born in Germany and has been the head dramaturge in the company since 2001, wants to bring current socio-political issues back to the fore. In the jungle of Vienna, which focuses on children’s and youth theater, an invitation to tender will soon be due, as the director’s contract Corinne Eckenstein Ends at the end of June 2022.

Matthew Zelenka becomes the new managing director of the events area of ​​the Wiener Stadthalle on February 1st. He is managing it together with the commercial director Carola Lindenbauer the big event location. Whether or not it will find good capacity utilization under him depends not least on the future Corona measures.

The presentation of Austria as a guest country at the Leipzig Book Fair in 2022 and 2023 has also been placed in new hands. Katja Gasser is now responsible for the literary away game after director Mirjam Unger had to put back her engagement in autumn due to scheduling conflicts. Gasser is the head of the literature department at ORF, but is on leave as an ORF journalist during her guest appearance.

Apropos ORF: In the largest media company in the country, far-reaching personnel decisions are made at the beginning of the year. Roland Weissmann officiated from January 1st as ORF General Director and thus resolved Alexander Wrabetz after 15 years in the executive chair. At the same time, Weißmann’s central team of directors started work. It consists of a program director Stefanie Groiss-Horowitz, Technical director Harald Herbs, Finance Director Eva Schindlauer and radio director Ingrid Thurnher. At the beginning of 2022, new bosses will take up their positions in five ORF regional studios: Edgar Weinzettl in Vienna, Robert Ziegler in Lower Austria, Klaus Obereder in Upper Austria, Esther Mitterstieler in Tyrol and Waltraud Langer in Salzburg. In addition, will Dorothea Gradištanac (formerly Dodo Rošcic) new FM4 boss at the beginning of the year, Lou Lorenz-Dittlbacher ORF III editor-in-chief.

But that is not enough for the ORF personnel raid in 2022: With the planned settlement of the new multimedia newsroom, which, in addition to negotiations on the ORF digital novelty, is likely to be one of the biggest projects for Weißmann in the first year of his term in office, central executives such as multimedia department heads or the new news desk will also be staffed. The position of editor-in-chief of the main TV department for magazines and service programs is also vacant. ORF 1 channel manager should be here Lisa Totzauer as well as TV chronicle boss Claudia Lahnsteiner have good cards.

In the Blätterwald there is also a noise in terms of personnel – albeit comparatively quietly: The “Oberösterreichische Nachrichten” starts with a new editor-in-chief, Susanne Dickstein, into the coming year. 2022 will also be exciting for the “Wiener Zeitung” – not only in terms of the continued existence of the world’s oldest daily newspaper, which has been threatened by the announced abolition of mandatory printed publications, but also in terms of editorial management. Acting editor-in-chief Walter Hämmerle was only extended this summer until the end of 2022.

See also  Irina Saltykova revealed the truth about the tumor: "I was diagnosed with cancer"