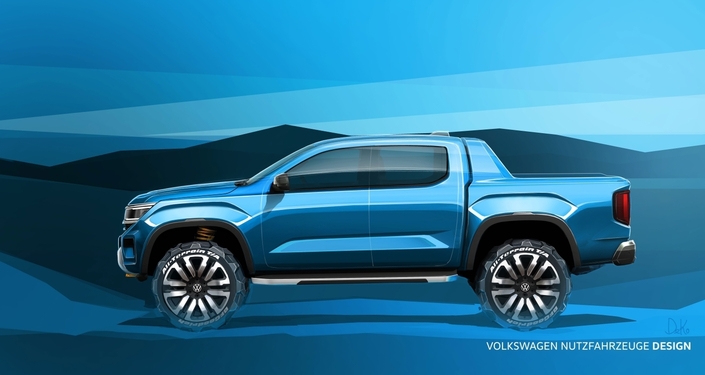 new info before the presentation

While several brands quickly threw in the towel (Fiat, Mercedes, Renault), Volkswagen is persevering in the pick-up segment. Logically, the first generation of the Amarok sold rather well, with 815,000 copies sold worldwide in 12 years.

However, for the second version, Volkswagen will no longer go it alone. It has teamed up with Ford as part of a global partnership to jointly develop their new utility vehicles. For VW, this will make it possible to have a more profitable pick-up. The next Amarok will thus be closely derived from the all-new Ranger, unveiled at the end of 2021 (and which will arrive on our roads by early 2023). It is also Ford, a great specialist in the genre, who developed the base.

The Volkswagen will however have the right to a distinct look, as shown by the teasers published by the Germanic firm. The entire front part will be specific. For example, there will be optics that are one with the grille. The wheel arches will also be more angular on the VW. At the rear, the lights or the dumpster flap will be specific to the Amarok. On the other hand, for reasons of economy, the central part with the doors will be shared. The interior will go upmarket, taking for example the large 12-inch vertical touch screen seen on the Ranger.

The Amarok will take 10 centimeters in length, and thus measure 5.35 meters. The chassis will also be wider, which will improve the loading surface of the tipper. A euro-pallet will pass between the wheel arches. Before considering the hybrid, the Amarok will be launched with a V6 TDI.