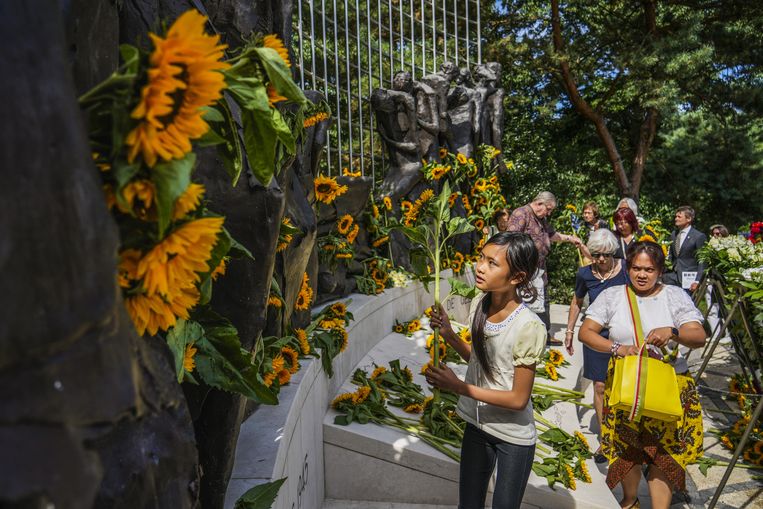 Much will be known, on Monday evening in the Scheveningse Bosjes. When the Indian bell rings, Prime Minister Rutte approaches the Indian monument with a stately walk, where thousands of people are already waiting. The melati pin glitters on his lapel, the Indian jasmine that many Dutch Indians wear on August 15 to commemorate the millions of victims who fell in the former Dutch East Indies during World War II. Not just the Dutch grandfather who died along the Burma railway or the Indo-European mother who died in an internment camp, but also all Indonesian, Chinese and Moluccan civilians who died of violence or starvation during the Japanese occupation.

Also present: the standard guard of the Regiment Van Heutsz which continues the traditions of the Royal Dutch East Indies Army (KNIL). Seven soldiers in ceremonial uniform with tropical helmet and clingy (Indian cleaver) goes under the drum roll with the regimental standard. Embroidered in gold lettering: Military Operations Royal Dutch East Indies Army 1832-1950; Korea 1950-1954; North Kandahar 2006; Uruzgan 2006-2009. Also on the flagpole hangs a rosette with a Military Order of William and a blue ribbon with the Aceh medal – cast from the bronze of the captured cannons during the capture of the sultan’s palace in 1874.

‘I can no longer bring myself to stand next to that banner’, sighs theatre-maker Bo Tarenskeen, whose show The Indian Interior – “a comedy about oppression and uprooting” – premiered on Monday. “This is no longer possible,” says professor of colonial and postcolonial cultural history Remco Raben (UvA, UU). They are not the only ones who are dissatisfied with the National Commemoration of 15 August 1945. Two years ago, the monument was vandalized by an action group who argued that colonial aggressors did not deserve commemoration. It is often third-generation Dutch Indians who on August 15 also draw attention to the darker sides of colonial history. Victimization and offending often go hand in hand. The grandfather who was used as a forced laborer by the Japanese army may have been a colonial civil servant before the war or participated in the Police actions after the war. The call for more attention to different perspectives is increasing in volume due to the increasing social attention for the slavery and colonial past of the Netherlands.

‘High time for a modernisation’, says the historian and blogger Lara Nuberg. The 32-year-old founder of simplyyeenindischmeisje.nl has written several opinion pieces in which she pleads for a national reflection on the shared history of Indonesia and the Netherlands. ‘Now it’s a very colonial anniversary. I understand that it is difficult to think about offense when you have suffered a lot yourself. And if your identity is strongly linked to the KNIL.’ Later generations, says Nuberg, are less bothered by this. “They rather think: my grandfather was a KNIL soldier and was therefore – well – on the wrong side of history.” In her opinion, the colonial name ‘Indian’ was also better avoided on 15 August.

Theater maker Tarenskeen (41) notes that Indo-Dutch people have a great need for recognition of the suffering they endured during the Japanese occupation and after their repatriation to the Netherlands. But that suffering, he says, runs even deeper. ‘Dutch East Indies was a violent, racist society in which the Indo-Europeans were also discriminated against. This is also part of the Indian trauma.’ According to him, it is appropriate to recognize all the suffering at a national commemoration, but also to account for it. Tarenskeen finds the presence of the Van Heutsz regiment astonishing. “I almost laugh when I see that banner with Aceh.”

About 2 million Dutch people have a connection with the former colony of the Dutch East Indies. From Prime Minister Rutte in the front row, whose father, brother and sister survived a Japanese internment camp, to many elderly veterans with medals on their chests and teenagers who may have questions. On the website of the foundation, they get the word in the video series Indian dialogues. What the Indian diaspora wants from the national commemoration has not been explored. Local versions may vary greatly.

In Rotterdam, for example, this year for the first time after a short anniversary a floating pasar with Indian food and music starts. “We were inspired by the Ketikoti celebration of the abolition of slavery,” said organizer Tenny Tenzer. “We want to celebrate freedom, as a starting point to break the Great Indian Silence.” The 41-year-old journalist refers to the refusal of many Indian parents or grandparents to talk about World War II. Tenzer is considering scrapping the military trumpeter and his tattoo altogether next year. “It doesn’t seem future-proof to me.”

In Amsterdam there is a Day of Remembrance and Celebration on August 16 (between the capitulation of Japan (August 15) and the declaration of independence by Indonesia (August 17). has been a ‘decolonizing anniversary’ since last year.

“Of course you have to commemorate the dead,” says Professor Raben. ‘They deserve it. But you also have to have an eye for the complexity of history.’ According to him, the national anniversary on 15 August is too much of a Dutch story. Even though more groups of victims have been mentioned in recent years: Europeans, Indos, Moluccas, Chinese, Papuans and romusja (forced labourers). According to him, the Indonesian citizen – at the time a Dutch citizen – is mistakenly missing. ‘The commemoration on 15 August cannot be compared to the commemoration on 4 May. Such a colonial anniversary is full of contradictions. Is an Indonesian who worked with the Japanese a collaborator? Why do we call the Indonesian Dutch ‘outdoor campers’ but not Indonesians?’ His advice: make the commemoration more inclusive, from various perspectives and thank Regiment Van Heutsz for its contribution. “They symbolize the KNIL, the instrument of colonial oppression, you can no longer put it there.”

Thom de Graaf, who has been chairman of the National Memorial Foundation 15 August 1945 for two years and whose parents were also in an internment camp, is aware of the criticism and states that numerous changes have already been made. For example, the group of victims to be commemorated has been greatly expanded and the role of the standard guard has been reduced. The entrance with banner procession is no longer the highlight of the commemoration and is no longer televised live. The uniform with a green jungle hat was replaced by a more ancient ceremonial outfit at De Graaf’s request. But the biggest operation can be seen next Monday.

‘We decided to give the ambassador of Indonesia a more prominent role,’ says De Graaf. “He will now lay his wreath at the monument immediately after the Prime Minister.” Earlier, the ambassador disappeared among all the other wreath-laying staff. “By giving him a central place, we show that we are not only commemorating European victims.” Also new: the anniversary has been moved to the evening, so that the live NOS broadcast reaches a larger audience.

When asked about the role of the Van Heutsz regiment, De Graaf says: ‘We cannot change that name. The standard guard represents all soldiers who died in the Dutch East Indies during the Second World War. They belong on August 15.’ De Graaf tries to broaden the group of victims as much as possible, but to limit the period that is commemorated. “Of course we can’t separate this commemoration from colonial history, but we can’t put all parts of history together either.” According to him, the Indonesian community in the Netherlands is very large and diverse. “I try to keep it in the middle.”

In the military home Bronbeek, also a knowledge center for the military-colonial past, Colonel Karel van Dreumel is prepared to explain why the banner is important for soldiers and family. ‘We are deployed ‘under the banner’ and some die ‘under the banner’. According to him, the embroidered cloth symbolizes the esprit de corps, the achievements and the loyalty to the head of state. ‘When the standard guard enters under the first sounds of the Wilhelmus, it also carries in the souls of all the fallen regimental members. So they always stay with us.’ According to him, there is no such thing as a nameless banner. And choosing another regiment makes no sense according to the commander. “Then you’re commemorating the wrong soldiers.”

The colonel rightly argues that the actions of General Van Heutsz and his approach during the Aceh War, at the end of the 19th and early 20th century, are looked at more critically. “There were heroic deeds under this banner, but also things that should never have happened. However, we must not hide anything, we must look history squarely in the eye and learn from it.’ If a young family member wants to commemorate without a standard guard, says Van Dreumel, he also hides his own grandfather. “If you think he did wrong things during colonial rule, be angry with the Dutch government that gave him that assignment.”

Not all Indian Dutch are happy with the changes. “I am not happy with a bigger role for the Indonesian ambassador,” said Dutch Federation of India spokesman Michael Lentze. According to him, Indonesia must first apologize for the violence committed against the Dutch during and after the Second World War. ‘It is strange enough that on 15 August we also commemorate Indonesian victims. Some third and fourth generation Indos apparently feel that they have something to make up for, but that is not what this anniversary is for.’

Among the grave files on Monday is also director Rocky Tuhuteru of the care organization Pelita, which has been dedicated to the well-being of the Indian diaspora for seventy years. “It remains important that we commemorate victims and show respect,” he emphasizes. According to him, three hundred children and grandchildren came forward at a meeting in June about trauma processing. “So our work is far from done.” At the same time, Tuhuteru says he also began to think differently about his grandfather who served in the KNIL. ‘Not that I immediately see them as criminals. We need to be more aware of our colonial and slavery past. But I don’t need it on August 15.’

See also  'Don't put your lives in the hands of coyoteros. In the US they will be captured and returned to Ecuador ', says Ambassador Michael Fitzpatrick | Ecuador | News