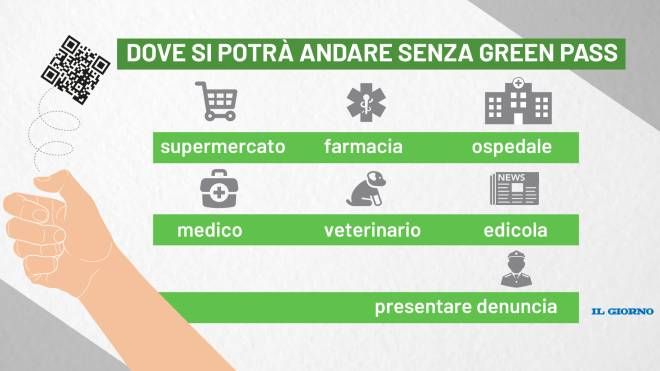 New Dpcm Covid: supermarkets, shops, dentist and doctor. Where will the Green pass be needed?

Milan, 13 January 2022 – New Dpcm arriving. After the one launched last January 5 by Prime Minister Mario Draghi, the Government is working on a particularly decisive provision because it will contain the list of activities included or excluded by the January decree, which provides for the extension of the Green pass base (i.e. the green certificate obtained after failing a molecular or rapid swab) in a number of places from February 1st.

In fact, the text of the law decree specified that, from the list of “public offices, postal, banking and financial services, commercial activities”, for which green certification from February 1st, they will be excluding “those necessary to ensure the satisfaction of essential and primary needs of the person, identified by decree of the President of the Council of Ministers, adopted on the proposal of the Minister of Health, in agreement with the Ministers of Economy and Finance, Justice, Economic Development and Public Administration, within fifteen days from the date of entry into force of this provision “.

But also this time the arm wrestling between penalty takers and aperturists. The draft prepared by the minister of the public administration Renato Brunetta in fact it would be quite small, with the League that instead it would be pushing to include all those remaining activities as well open during the red zone period. Mediation will therefore have to be sought on the issue in the next few hours. The government has 15 days from the entry into force of the decree law – last January 8 – to finalize the Dpcm. But let’s see everything in detail.

Shopping at the supermarket or grocery stores, the pharmacy, the hospital, the GP’s office, the veterinarian, newsagents and tobacconists. A report if you are a victim of crime or for urgent needs for the protection of minors. According to what is learned, these are some exceptions to the obligation to show the green pass (basic or enhanced) for access to services and commercial activities in arrival with the Dpcm. According to He put up the list of activities to leave free entry should coincide with those identified from one of the annexes of the Prime Ministerial Decree dated 2 March last year, which indicated the activities that remained open also in red zone.

Green pass, in which shops will it be mandatory?

In the dental offices the obligation to show the Green Pass, basic or strengthened, it is not required by law, while dentists, hygienists and assistants (Aso) are already obliged to the vaccine, as health personnel. Patients are required to self-certify, but in any case the dentist has a duty to provide care, especially in emergencies (not for simple cleaning of the teeth). Raffaele Iandolo, president of the National Dental Association (CAO), which has 63,000 members, explained to Askanews: “No law stipulates that in order to be treated one must be vaccinated. To date, anyone has the right to protect their health and therefore in our studies the right of the patient to be treated and the duty of the professional to treat him intersect. So if you ask for the Green Pass, but no law obliges you to ask for it, nor does it allow you to ask for it for privacy reasons, if you ask for the Green Pass, however, the Green Pass would have no effect on the possibility that that patient is treated and on the obligation to part of the professional to treat him “. “Surely he is not obliged to say it, but if we ask a patient in the medical history if he is vaccinated with respect to the covid or not, I do not believe that there is an invasion of privacy, so – he explained, underlining – This is a ‘ my personal opinion, but it is clear that there is no ad hoc rule on this. We cannot refuse patients with respect to the vaccination status ”.

According to the latest decree law, from 20 January the obligation to have the basic pass is triggered, therefore the one obtainable even with a tampon, to access to personal services: barbers, hairdressers, beauticians.

According to the latest decree law, from February 1st, to access any public office or postal, banking and financial services, e to commercial activities, you will need to have the basic pass. From face up to the shopping center node, which contain activities of all kinds within them. Therefore, the check could take place shop by shop and not at the entrances.

January 2022 decree, all the news and dates

Who is it without the Green pass, he loses his citizenship income. The mix between the Budget law and the decree of 7 January which tightens certification rules lead to this result. Those who receive the subsidy will have to compulsory attendance at employment centers; but to enter the offices will have to present at least the green light certification, that is the one obtained with the quick negative swab. According to the data provided by the government on Citizenship Income and on the progress of the vaccination campaign, it appears that i beneficiaries possibly at risk, as unvaccinated and unhealed, they are about 10 thousand. The intent is to bring these subjects to start the vaccination course as soon as possible, so as to reach 10% by winter. The subsidy currently reaches around 1.3 million households (three million people) of which 30% are deemed employable and therefore subject to the obligation to attend employment centers in the presence.

Meanwhile, yesterday, during Question Time in the House on health minister Roberto Speranza he said that “it will be the responsibility of the Ministry of Health to prepare the lists of non-compliant subjects “to the vaccination obligation for the over 5s0 “also by acquiring the information relating to the administration of vaccines acquired daily from the national vaccination register directly from the health card system”. In particular, the Ministry of Health, making use of the Revenue Agency, will send a communication to the defaulting parties who will be able to send any certification relating to the deferral or exemption from the vaccination obligation to the competent ASL.