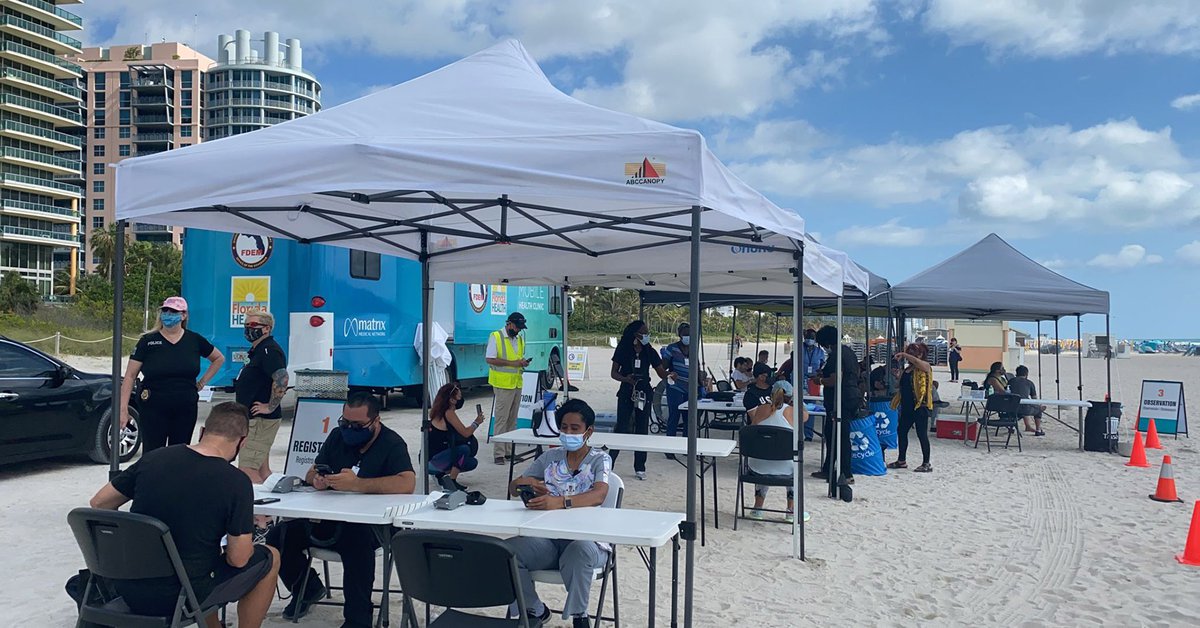 The vaccination campaign on the beach in Miami

The numbers are impressive. From mid-January 2021 – the date on which vaccination was extended to the general population – until today, Total new COVID 19 cases in the state of Florida decreased 87 percent. In the same period, the average number of patients hospitalized as a result of the virus has dropped 74 percent. All according to an analysis of the data by epidemiologists at the University of South Florida.

To put it even more in perspective, during the peak of the pandemic in the summer, more than 2,000 people were hospitalized each day with coronavirus cases in Miami Dade County. Today, throughout the state of Florida, there are about 1,800 people in hospitals with COVID 19.

The numbers are even higher in Miami Dade County, where 1.2 million residents have already received full immunization. In some way, controlling the situation in Miami Dade has helped the state in general to be better, since this has been the worst affected county during the pandemic.

In general, hospitals are not providing data on how many of those still in the hospital for COVID 19 have already received the vaccine. But the Baptist Health hospital headquarters in Boca Raton is doing it. At that health center, 88 patients were admitted to the hospital for COVID 19 between the end of April and the end of May. Only 4 of them had been vaccinated. Of these, two had a mild case, one was asymptomatic and the other was immuno-depressed and had several pre-existing diseases. None died.

Anna Aguilar, a member of the Guatemalan Mayan community in Lake Worth, Florida, receives a dose of the coronavirus vaccine (Saul Martinez / The New York Times)

At the national level, the CDC (Centers for Disease Control for its acronym in English) is keeping a statistic of what they call the cases of bankruptcy, people completely immunized against COVID 19 who still ended up hospitalized, or even died, as a result of the coronavirus.

As of June 4, nearly 137 million people had been fully immunized in the United States, which is equivalent to 49 percent of the population over 12 years of age. Fewer than 3,000 of them were hospitalized for COVID 19, according to CDC data.

About 535 fully vaccinated people have died after a diagnosis of COVID 19 in the country, although 88 of them had a proven cause of death for a cause other than the virus.

As the pandemic wears off, more data will have to be relied on at the national level. Local governments are ending emergency declarations, and therefore have fewer resources devoted to studying the pandemic. In Miami Dade, for example, Mayor Daniella Levine Cava decided last week to stop requiring hospitals to report COVID 19 data daily. Health centers will continue to send information to the state, and reports will be provided centrally. weekly.

The delay in the vaccination rate in the southern United States could lead to a summer wave, warn specialists
Spain opens borders to vaccinated tourists and international cruise ships