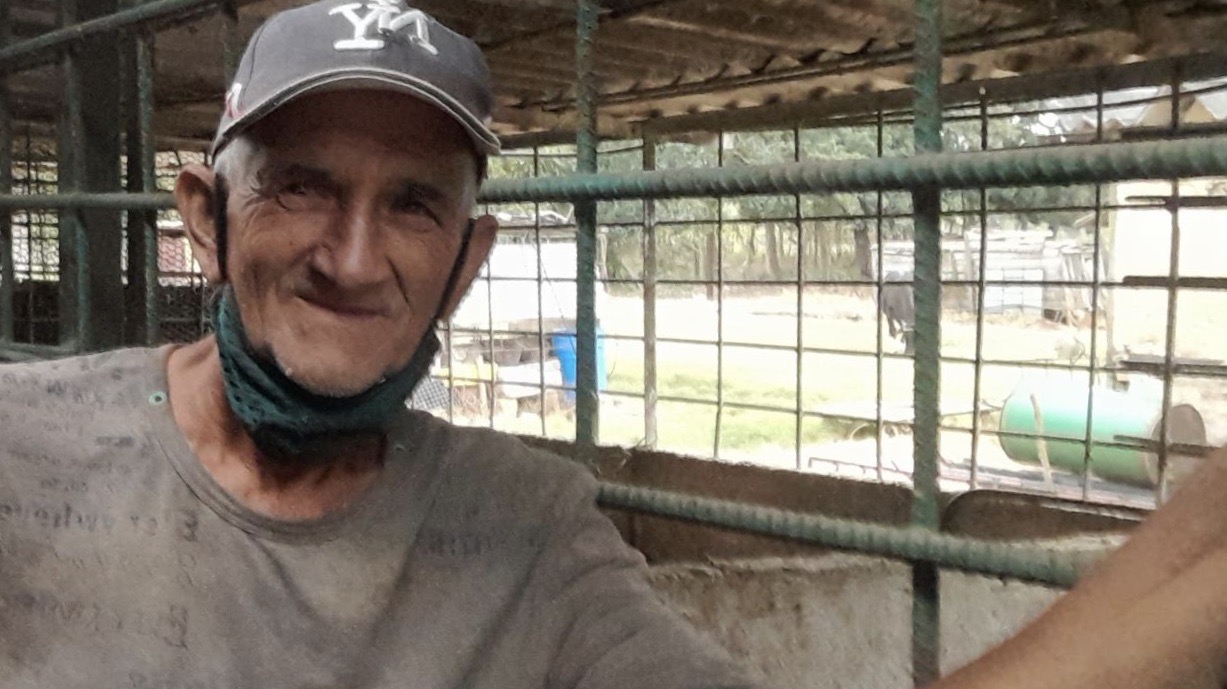 Nephew of Arnaldo Ochoa: “What I want is for people to improve, to help those most in need”

Old Cubans always shake hands. The younger ones also kiss and hug, but they still give strong handshakes. On my recent visit to the Island I met a man who did neither. His way of greeting was to give his head a clenched fist. Since she has the platinum half skull, she likes to start there. His knuckles make a bitter sound like the taste of metal.

His name is Enio Calzadilla Ochoa, he is a retired captain of the Cuban Armed Forces and the nephew of the Division General who was shot in July 1989, Arnaldo Ochoa Sánchez. They had told me about this man who has been spending a lot of time in the neighborhood for a few months, on the outskirts of the Colón municipality, in the Matanzas province.

In the afternoon that we meet, he wore a padded jacket that had once been white. The piece had two extremely sulfated eyelets on the neck. The green-blue rust that they gave off, was obvious as an unequivocal symbol of their economic situation.

Enio is very similar to his uncle. He has skin attached to his bones, big ears, and a nose that protrudes from his face. A face that is tied when asked about that fateful year 1989.

“After all,” he recalls, “who was going to expect that from a Hero General of the Republic of Cuba with such a reputation. In the trial, even Raúl (Castro) told him what qualities he had. I look a lot like him, I was even taller than him. At that time I felt like a bit of a bastard because I said to myself ‘damn, my uncle is into that… and they’re going to brush him off'”.

In addition to the family bond that united them, Enio and Arnaldo met during the war in Angola.

“He was the head of the Cuban mission in Angola when I was there (1980-1982), but we hardly ever saw each other. His son, my cousin, was also there. He had gone to spend the service, but we didn’t see much of each other either. He was always in a BRDM (Soviet-made amphibious vehicle), going here and there; That didn’t have to go.”

Arnaldo Ochoa Sánchez led the Cuban troops in the Ogaden war in Ethiopia and the Cuban military mission in Angola. In 1989 he was accused of “high treason” for drug trafficking and stripped of his military ranks and his status as Hero of the Republic. He was sentenced to death along with other officers in a military trial that many analysts saw as a maneuver to eliminate a political opponent. and clean up the image of the regime, surrounded by accusations of links to drug trafficking.

How did the family experience your uncle’s case?

Nothing, they were very people… he blamed himself… My mom and I went to the trial, they didn’t let anyone else go. It was a military process. Of the family, Apart from us, they only let their wife and children go. When he was shot, he directed the execution himself.

He was never in Cuba. He was always out on assignments that prevented him from maintaining any close ties with us. How were we to know that this man was going to get into it? When he came to Cuba, he came to speak with the big bosses, the generals, with the minister. The relationship between Ochoa and Raúl was very close. My uncle was the first Hero General of the Republic of Cuba.

Do you think that Raúl and the rest of the government were also involved in that?

So, do you think the others didn’t know that?

Ochoa linked up with Abrahantes and those people looking for an improvement. In the end it was said that they wanted to carry out a coup here, but they were surrounded and captured.

And why was Abrahantes later?

It is that if at that moment they say that a Cuban minister is involved in drugs, it is a phenomenon for the Cuban people. It was necessary to unlink that and put another, softer cause for it. separate one problem from the other.

After 32 years, the tightness of the Cuban government has caused more shadows than lights on the Ochoa issue. Characters lost in time like Enio Calzadilla never understood what they lived through and uncertainty took hold of a story that was never fully told.

“Look if all that affected my whole life —recalls Enio—, that from then on I began to study and study. They sent me to schools to clear my head a bit. Then I took a little load more or less there, to live life as head of the combat preparation section back in Holguín. It was a small unit, with just over 100 people.”

While we talk, Enio touches the back of his head from time to time, where he has had several operations done. “In 1981 I fell from a car in Angola and smashed my entire skull. We went in a caravan from Huambo to Menongue and in Caconda we camped that night. We were more than 200. The next day, leaving the caravan, a mine exploded, the driver knocked me down and I lost my head”remember.

“By helicopter they took me practically dead to Luanda. There I recovered, I stayed and fulfilled the mission. The Cuban doctors who were there treated me. The chief of the Menongue shooting range was me. I made that shooting range, from scratch, there was nothing there. They were three-story towers up there. I did it with a man from Camagüey”.

“In the end, I spent 29 years in the Armed Forces. I retired in 2008. I worked most of my career in Holguín, but I also studied in Santiago. I did several specialties at José Maceo related to Operations”.

What kind of relationship do you have now with the FAR?

Once a lieutenant colonel from Matanzas came. She proposed that I go to a military unit. I told him “Look, they’ve already retired me. I’m on this farm now, what am I going to live on?” He wanted me to give classes in the mobilizations, because… I am a full professor! So, we agreed that they wouldn’t bother me unless there was a war or something big.

I never asked for a house during my military career, or an apartment or anything. I didn’t ask for the equipment they gave me either, but I played well because ultimately the error was not mine and he said that the error was his (referring to his uncle, Arnaldo Ochoa).

What I am is crazy because this shitty disease is gone. See your family and mine that they are well. That people can eat better. I don’t know what it is, but whatever it is to go.

Do you want the government to change?

The Government manages as it pleases, what I want is for people to improve, to help those most in need.

After Enio Calzadilla retired, he followed the invitation of a friend and went from Holguín to Guareiras, a town near Colón. After seeing a farm that needed labor “he liked that” and settled there. Later she changed farms and that’s how she came to my neighborhood.

Every day he drinks alcohol with the local drunkards as evening falls. They exchange information about the current harvest in the surroundings or comment on the number that came out the night before on the little ball.

When I asked Enio how the crops were going, he agreed, but with the harvest something was wrong. Then he rubbed his jaw again to make a reference to Fidel Castro (as a symbol of the system that controls everything in Cuba), and told me:

“They pay when they feel like it. I’ve sometimes been waiting up to six months for payment for the tomato that I collect. It’s the same with the cows, that’s a disaster here.”

There was a silence in the dialogue while I processed to what extent this 62-year-old man had been a victim of the Cuban government. Enio interrupted him and went from interviewee to interviewer.

“What time are you leaving tomorrow?” He told me.

–Tomorrow morning we leave for Varadero.– I answered.

–What is your foot number? Do you have a spare pair of shoes?He asked me as he raised his leg and grabbed his boot.

–I only brought these shoes (I pointed to the ones I was wearing), which also wouldn’t work for you. I came from a mule…” I replied.

I ended up babbling about why I couldn’t help him. Automatically, I thought of buying her some, but if buying bread in Cuba is difficult, I discarded the idea of ​​getting shoes. I went through the pockets and handed Enio what I had, a freshly opened box of H. Upman cigars and 100 Cuban pesos. He smiled at me and placed his right hand on my shoulder before saying “thank you compay!”

Enio Calzadilla Ochoa was one of the few relatives of General #ArnaldoOchoa who was able to go to his uncle’s trial in 1989….