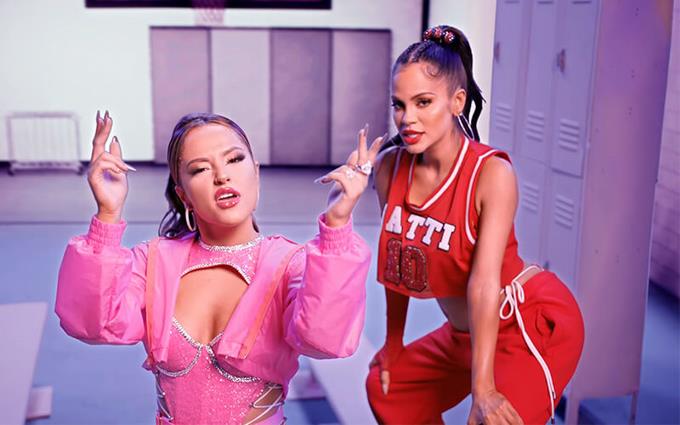 Natti Natasha continues to make her mark as one of the most influential female Latina artists in the world. Today, he reaches another success in his career with the conquest of Latin radio in the United States and Puerto Rico with his hit “Ram Pam Pam” with Becky G, adding his eighth No. 1.

As one of the most anticipated musical reunions of 2021, this second collaboration between Natti and Becky G has surpassed 80 million views and already has more than 227 million views on YouTube and is in Spotify’s Global Top 50 Charts on 13 countries.

Natti Natasha and Becky G revolutionized the music industry three years ago with a feminine empowerment movement in the Latin urban genre with their historic collaboration “Sin Pijama”, a video that is about to reach two billion views.

The video became the most-watched female collaboration in YouTube history, breaking the record for “Side by Side” by Nicki Minaj and Ariana Grande, and currently has more than 730 million views.

Today, “Ram Pam Pam” reached the No. 1 position on US Latin radio and became the most listened to song on Billboard’s Latin Airplay and Latin Rhythm charts, becoming Natti’s eighth No. 1. Earlier this year, Natti reached No. 1 on both charts with “Before the Sun comes up” alongside Prince Royce.

While celebrating the third anniversary of their first collaboration with the release of “Ram Pam Pam,” Natti and Becky G made a special appearance on The Tonight Show Starring Jimmy Fallon, setting another record for Natti.

Released under the Pina Records / Sony Music Latin label, “Ram Pam Pam” was produced by Yann C, LUNY and Raphy Pina, bringing together a Dream Team of songwriters, including Natti Natasha, Becky G, Daddy Yankee and Justin Quiles, among others.