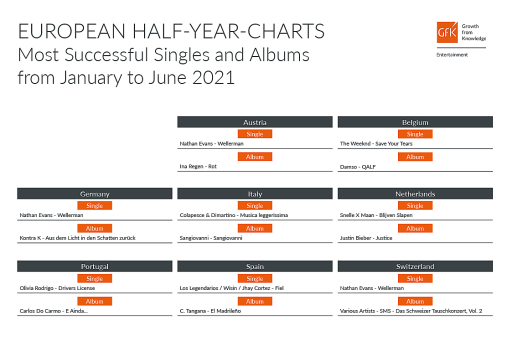 Baden-Baden (ots) – European musicians are particularly in demand in their home countries in 2021. This is shown by the official half-year charts that GfK Entertainment has compiled for eight different countries. While singer-songwriter Ina Regen (“Rot”) was responsible for the most successful album of the first six months in Austria, rappers Damso (“QALFC”) and C. Tangana (“El Madrileño”) prevailed in Belgium and Spain . In Portugal – posthumously – the deceased Fadista Carlos do Carmo (“E Ainda …”) wins, in Switzerland the compilation “Sing my Song – The Swiss Exchange Concert, Vol. 2”.

A total of four of the five most popular Swiss records since January come from local acts such as dialect musician Kunz (“Mai”, two). This is only topped by Germany and Italy, where the complete top 5 consists of national artists – and hip hopper Kontra K (“From the light back into the shadows”) and the punk band Broilers (“Puro Amor”) resp. Pop whiz kid Sangiovanni (“Sangiovanni”) and the “Eurovisions” clearers from Måneskin (“Teatro D’Ira – Vol. I”) have the edge. Only the Netherlands has an international act on the throne with the Canadian Justin Bieber (“Justice”).

The six-month single charts, which are dominated by English-language titles in many places, paint a completely different picture: “Save Your Tears”, for example, is the most popular hit in Belgium in 2021 and also reached the top 5 in four other countries. The shanty dance number ” Wellerman “is right at the top in Germany, Austria and Switzerland, supplemented by a good third place in the Netherlands. Olivia Rodrigo’s “Drivers License” and Tiësto’s “The Business” also storm into the top 5 in four of the regions examined.

The reggaeton musicians from Puerto Rico, Los Legendarios, Wisin and Jhay Cortez (“Fiel”) and Myke Towers / Juhn (“Bandido”) lead the Spanish half-year hit list, which is interspersed with Spanish-language tracks. Italian music fans also like to hear songs in their mother tongue, including “Musica leggerissima” by the two Cantautore Colapesce & Dimartino (one) or the “Sanremo Festival” and “ESC” winner song “Zitti E Buoni” by Måneskin (four) .

The official half-year charts are based on the physical sales, downloads and music streams of the following countries: Belgium, Germany, Italy, the Netherlands, Austria, Portugal, Switzerland and Spain.