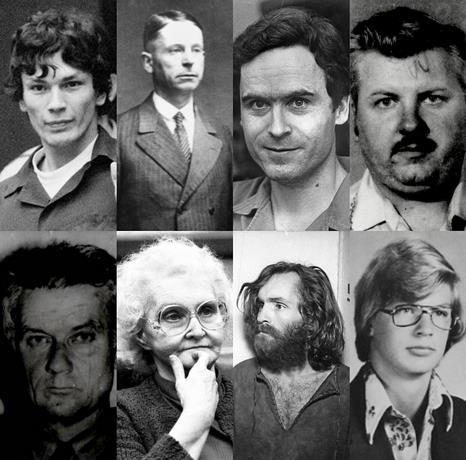 Murderers in history: eight serial criminals known for their atrocities

The United States, Ukraine and Germany have been the countries in which many of the worst serial killers in the history of mankind were born. These are people known internationally for committing terrifying acts, without any sense of guilt and who planned their actions in a cold and calculating way.

Some of them were not satisfied with murdering, raping and torturing their victims, but also practiced necrophilia and cannibalism, while others used their appearances to gain the trust of people they later murdered.

Their stories have been exposed by the media, writers and film companies that have compiled their macabre exploits in documentaries, books, movies and series.

Known as Ted Bundy, the American psychologist and lawyer Theodore Robert Bundy is one of the most remembered murderers for his evil crimes, which happened between 1974 and 1978.

Bundy used to pass himself off as disabled or as prominent people in society and, in addition, he used his physical attractiveness and charisma to gain the trust of his victims whom he raped, tortured, murdered, and then kept parts of their bodies as trophies. .

He confessed to murdering a total of 30 American women who were between the ages of 12 and 22. Some of them were university students.

He was arrested in 1979 and used his knowledge to defend himself, becoming his own lawyer, managing to delay his execution on several occasions.

Despite his attempts, on January 24, 1989, when he was 42 years old, he was executed in the electric chair.

A curious fact is that, after being arrested, several girls visited him because they were his fans and they considered him an attractive man.

His story has been told in various productions, including the films ‘The Deliberate Stranger’, ‘Ted Bundy’, ‘The Stranger Beside Me’, The Riverman’, ‘Bundy: A Legacy of Evil’ and ‘Ted Bundy: Sleeping with the murderer’, tape in which the outstanding actor Zac Efron leads the cast with Lily Collins.

Also, in 2019, Netflix released the documentary ‘The Ted Bundy Tapes’, created and directed by Joe Berlinger.

The same is part of the documentary series ‘Conversations with murderers’, which also talks about John Wayne.

When talking about serial killers, like Ted Bundy’s, the name of Charles Manson is usually one of the most mentioned.

And it is that he became famous after it was discovered that he had created and was the leader of the criminal sect ‘The Manson Family’ (Manson Family), which operated in California.

See also  A student in Ben Trey was blown up by her friend, hit the council...

It was proven by police officers that he directly participated in two murders, but many believe that he induced the murder of seven people.

Among his crimes is the murder of the director of the model and actress Sharon Tate, who was eight months pregnant at the time of the incident, which shocked the United States.

The crime occurred at a party held at the house of Tate’s then-husband, the controversial filmmaker Roman Polanski, in 1969 and to which Manson and his followers entered to commit the murders, in which they also killed friends of the couple.

Regarding his fate, he died on November 19, 2017, when he was 83 years old, due to cardiac arrest since he suffered from colon cancer, after he was sentenced to life imprisonment in 1972.

“The Red Ripper” and “The Rostov Butcher” were the pseudonyms people used to refer to the Ukrainian Andrei Chikatilo, a criminal who mutilated children and women from the late 1970s to 1990.

Chikatilo discovered his favorite part of his crimes in 1978 when, after kidnapping a girl and physically harming her, one of her wounds bled, a situation that he liked to the point that his sexual pleasure began to be based on causing injuries to his victims and see how these screamed.

His wickedness and madness reached the point that he practiced cannibalism, pulling out the nipples and eyes of those who were his victims, and keeping part of their organs as a prize.

After being arrested, he confessed to the murder of approximately 56 people, and as a result he was executed on February 14, 1994 in Novocherkassk, Russia.

‘Serial Killers: The Real Life Hannibal Lecter’, ‘Evilenko’, ‘Ghoul’ and ‘The Rostov Butcher’ are some of the productions in which they talk about their history.

Murdering ruthlessly while enjoying the act is not something exclusive to men, there are women who commit such acts without feeling the least bit guilty and Dorothea Puente is an example of this.

Her given name was Dorothea Helen Gray and she was born on January 9, 1929 in California, United States.

She was the owner of a guest house in Sacramento, where she caused the death of several of her inmates for a long time, for which she began to be called “The house of horrors”.

Although she had been arrested for running a brothel and tax fraud, it was not until it was discovered that she robbed, drugged and caused the death of many of her internees who were elderly and disabled, that she was arrested and sentenced to life in prison in 1993. .

She murdered her boyfriend and kept his pension money, meanwhile she lied to her relatives, telling them that she was sick.

Additionally, he killed a woman who was his business partner and friend, after giving her an overdose. In her defense, he claimed that she had committed suicide because she was depressed.

Puente put his victims to sleep using pills and suffocated them, after killing them he paid for them to be buried in the garden of his company. He was married four times, and as a result of his marriages he had three daughters, which he gave up for adoption and, in addition, he had an induced abortion.

“The killer clown” was born in 1942 and his first name was John Wayne, a man who worked as a clown at children’s parties, in which he called himself by his stage name “Pogo, the clown” but, although he pretended to be a person normal and cheerful, deep down he hid many secrets.

In 1968 he sexually assaulted two young people, for which he was sentenced to 10 years in prison, but he only lasted 18 months serving it, because he was lowered for his good behavior.

Six years later he was arrested for being linked to a kidnapping and when police authorities began an investigation into that case, they discovered that he kidnapped, raped and killed 33 men between the ages of 14 and 21.

In the year 1978, he confessed his crimes to the police and also gave them the location of the bodies of some of his victims. Many of these were in the basement of his home, while others were buried in the Des Plaines River, located in southern Wisconsin and northern Illinois.

He was sentenced to several life sentences and death sentences, but his death occurred after a lethal injection was applied on May 10, 1994, when he was 52 years old.

The case was made known after a person he had kidnapped escaped and went to the police, who, upon arriving at his home, arrested him and revealed the chilling facts that made him the “Milwaukee Butcher.”

See also  La Plata on yellow alert for storms and hail: how the weather continues on the weekend of Carnival

Dahmer said in his confession that he had ingested body parts of some of the boys and was later sentenced to 15 consecutive life sentences.

He was murdered by African-American inmate Christopher Scarver, who was incarcerated in the same detention center as him.

Born in Germany, Peter Kürten began to be nicknamed “The Vampire of Düsseldorf”, after he claimed to have drunk the blood of his victims, whom he killed in 1929 in the city of Düsseldorf.

He was arrested in the month of May 1930 and accused of taking the lives of 9 people and committing 80 sexual assaults.

One of his victims was Rosa Ohlijer, an eight-year-old girl whom he stabbed thirteen times with scissors, then drank her blood and burned her body.

After being found guilty, he was sentenced to nine death sentences, due to what his lawyers alleged that he had mental disorders, which did not work as a defense, since he was executed by guillotine on July 2, 1931.

A curious and particular fact is that, during his execution, he asked his executioners to be silent for a few seconds after his beheading, in order to be able to hear the drops of his blood as it dripped on the ground.

His head was mummified for display at Ripley’s (Believe It or Not) museum of the bizarre in Wisconsin Dells, USA.

“The night stalker”, Ricardo Leyva Ramírez Muñoz carried out a total of 14 deadly crimes between the periods of 1984 and 1985, in which he was inspired by his satanic beliefs to commit these sadistic acts.

Unlike other criminals, this one did not have a pattern and murdered regardless of the race, sex, or age of his prey.

He was lynched by a large number of people who wanted to kill him, but his death did not occur until June 7, 2012, due to liver failure.

For a human being to be considered a serial killer, they must have murdered a minimum of three people in different periods.

In the past, they were called “pattern murders”, “multicide” and “killer of strangers”, until the writer of criminal psychology books, John Douglas, who was previously head of the Federal Bureau of Investigation (FBI for its acronym in English), coined the term.

Despite this, it became popular when behavioral profiler and FBI agent Robert K. Ressler began using it in the 1980s.