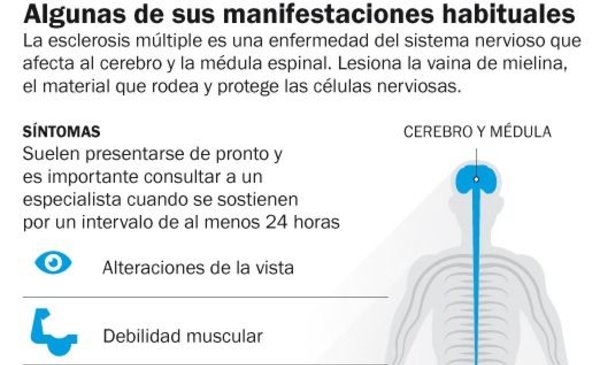 Multiple sclerosis: attention with symptoms that last more than a day

The leading cause of non-traumatic disability among people aged 18 to 35, multiple sclerosis has “better prognosis the earlier the diagnosis”. Hence, it is important “to be attentive to the symptoms that appear for more than 24 hours,” warn specialists as the World Day of this disease is commemorated today.

Multiple sclerosis, which affects the central nervous system in a chronic and degenerative way, can present “very varied symptoms” and even be asymptomatic in some cases”, explains Johana Bauer, psychologist and head of the Mental Health Area of ​​the Argentine Multiple Sclerosis Association. (EMA).

Among the most common symptoms of it are muscle weakness, vision changes, tingling, itching or numbness, memory and thinking problems, fatigue and lack of coordination and balance.

“This appears suddenly and it is important to record that it is something that appears and is sustained for an interval of at least 24 hours,” Bauer points out.

It can also happen that the symptom appears, lasts more than 24 hours and then disappears: “It could happen that I had double vision and since I was just stressed, I attribute it to that, and the symptom disappears until there is another manifestation”, exemplifies the specialist.

However, “the series of these manifestations wears out the body and that’s where disability begins,” says the entity’s head of Mental Health.

The most common way in which the disease occurs is “flare-ups and remissions”, along with the “first progressive and secondary progressive” forms, which until 2019 had no treatment available, he explains.

Despite the fact that it affects “mainly women between 20 and 40 years old”, the psychologist points out that currently “there are treatments to stop the disease and have quality of life”.

“Before they gave you the diagnosis and everything was over,” says Bauer. Today, luckily, for people who receive the diagnosis, the scenario is different. There is psychological rehabilitation and alternatives, like doing yoga and dancing tango that we know they do very well”.

In turn, although there are pharmacological treatments that act on multiple sclerosis, “rehabilitation and the search for well-being are essential,” the professional emphasizes.

Although the percentage shows that for every three women who suffer from the disease, it occurs in a man, “with advancing age (over 45-50 years old) the relationship becomes equal and is equal in men and women”, explains Jorge Correale, neurologist and head of Neuroimmunology and Demyelinating Diseases of the Foundation for the Fight against Neurological Diseases of Childhood (Fleni).

“There is no specific test to detect multiple sclerosis: the diagnosis arises from the evaluation of the symptoms reported by the patient”, explains the neurologist, emphasizing that “the faster the diagnosis and treatment, the better the future prognosis” of the illness.