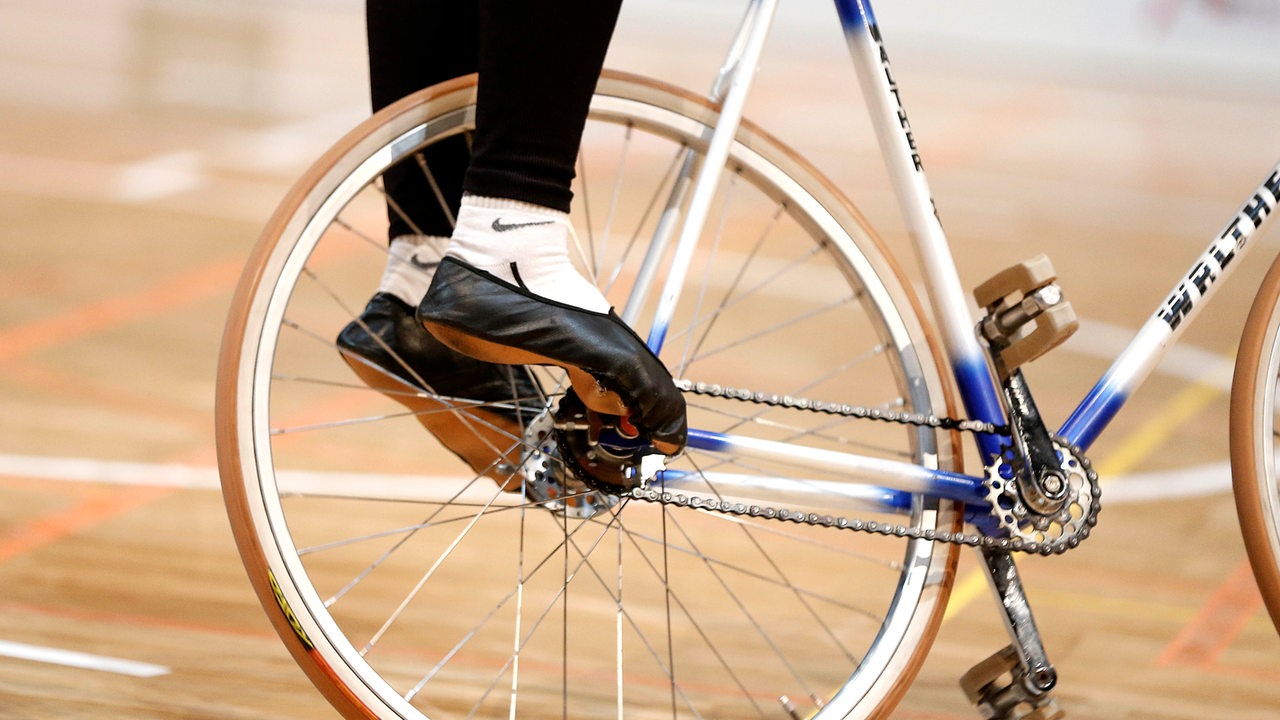 Multiple sclerosis at 22: This woman from Bremen wants to ride an art bike again

Janina Mües does sports and takes part in championships. But suddenly she always falls down. The diagnosis comes as a shock. On World MS Day she tells her story.

It all started with artistic cycling, as Janina Mües explains. The 22-year-old speaks softly, and unlike four weeks ago, you hardly notice that her mouth isn’t pronouncing the words very clearly. The young woman remembers a training session in mid-February when she suddenly couldn’t ride her bike to the right anymore. “I had balance problems,” she says. The teammates are also surprised.

The experienced athlete, who has already competed in German championships, tries to dismiss the inexplicable as a “bad day”. And she keeps falling, every time she turns right. Until she comes down unhappily and tears the ligament in her ankle. What Janina Mües doesn’t yet know is that her balance problems are the first symptoms of multiple sclerosis (MS). A week later she has her first severe attack.

The course is typical, says Professor Thomas Duning, chief physician of neurology at the Bremen-Ost Clinic. An MS flare-up builds up slowly, and patients develop the first symptoms over several days. MS is a brain disease, an autoimmune disease. “The immune system attacks the body’s own tissue because it is misdirected. In MS, this typically happens in the brain, and the nerves become inflamed.” This creates scar tissue and these areas no longer function.

Janina Mües studies and lives in Bremerhaven. Because it’s the semester break, she visits her parents in Schwanewede a week after she kept falling and injuring herself in training. There she wakes up one morning and can no longer move her right hand. “I thought I lay on it and she fell asleep,” she says. Because it’s not getting better, she calls her mother and realizes that she can’t speak properly. “I couldn’t say the words I wanted to say. That was scary.” Speech disorders, paralysis – the parents fear a stroke and call an ambulance.

Janina Mües comes to the Bremen-Nord Clinic. Now a speedy diagnosis is important, as neurologist Duning says. “Because once the nerve cells have been destroyed, it is almost impossible for them to regenerate.” The therapists want to avoid this and start the therapy as quickly as possible. The patient is immediately taken to the MRI, where a picture of her head is taken. “It happened really quickly,” she recalls.

In addition, a so-called lumbar puncture is performed, in which brain fluid is removed from the spinal cord. These methods can be used to detect inflammation in the brain. Janina Mües found out for sure just one day later that she had multiple sclerosis.

I had to process that first. It’s a chronic disease, and it’s like that forever. At the moment you can’t even imagine how it affects life, how it goes on. I was shocked.

Young women in particular get MS

It’s no surprise to veteran neurologist Duning that a young, athletic woman should be diagnosed with MS. “This is a typical patient for this disease,” says Duning. Although MS is rare in the general population compared to other common diseases such as diabetes and heart attacks, it is one of the most common neurological diseases. In Germany and also in Bremen, eight out of 100,000 people are affected. “Men can also get MS, but women are three to five times more likely,” says the doctor. Especially at the age of 20 to 40 years, “and especially in women in their 20s, the diagnosis is not uncommon”.

Once MS is diagnosed, treatment is given immediately to stop the inflammation as quickly as possible. Janina Mües gets cortisone. Because that doesn’t work as well as hoped, she gets a blood wash, the plasma is exchanged, as she continues. “It sucked, it was quite a lot all at once,” Mües remembers.

After a week the patient feels the first improvements and is discharged. But the right hand is still paralyzed, “I couldn’t walk around either”. She also finds it difficult to speak and swallow: “I couldn’t eat very well, or I often choked while drinking.” She works on these limitations with a speech therapist and a physiotherapist.

According to neurologist Duning, the disease usually comes to a rest with acute therapy. Because of the chronic course, however, new flare-ups, acute inflammation, keep occurring. In order to suppress this, high doses of cortisone are then given, as with Janina Mües. But that’s only enough for the moment. “You also need permanent immunotherapy so that the immune system does not develop new inflammations so often,” says the doctor. Mües therefore has to go to her neurologist every six weeks for an IV drip, through which she is given MS medication that stops new flare-ups target.

There is no disease in which therapy has developed more dynamically in neurology than in multiple sclerosis.

According to Duning, it is not possible to predict when a new boost will come. “There are people with MS who haven’t had a relapse for years. Other forms of progression have new relapses every two or three weeks.” Although the disease MS is not predictable, the drug treatment options have developed enormously in the last ten years – and especially in the last five years, explains the Bremen doctor. “There is no disease in which therapy has developed more dynamically in neurology than in multiple sclerosis.”

While the immune system used to be grossly suppressed, making patients more susceptible to infections, there is now a wide range of drugs that specifically suppress the immune system. This allows for more targeted and individual therapy: “Where are the lesions, how many are there, how old is the patient, does she still want children?” According to the physician, these questions can now be incorporated into the therapy plan.

Another major advance in MS treatment is currently being researched: Vaccination could reduce the risk of disease.

The causes of MS are not clear. However, US researchers only published a possibly trend-setting finding in January: The autoimmune disease “multiple sclerosis” is apparently triggered by a virus, the Epstein-Barr virus. It is known as glandular fever and belongs to the herpes virus family and 95 percent of adults carry it. The connection had long been suspected, as the Bremen neurologist Duning explains. Now it should be clear: If you don’t have Epstein-Barr, you can’t get multiple sclerosis. “The length of the data is impressive,” Duning said, “The medical histories of millions of patients were reviewed.”

Of course, not everyone who carries the virus will develop MS. Other factors play a role. For example, MS occurs less frequently in countries around the equator than in Scandinavian countries. Connections with sun exposure and a vitamin D deficiency are therefore suspected. And there must be a predisposition. Nevertheless, the finding has a huge impact: Vaccination against the Epstein-Barr virus could massively reduce the risk of contracting the disease.

Researchers have been working on this for decades because the virus can probably also lead to cancer, especially leukemia, explains the Bremen neurologist Duning. Studies are currently underway and vaccines are being tested. However, there is still too little data to predict when an Epstein-Barr vaccine will be available. As soon as the time comes, one could vaccinate nationwide.

It’s too late for Janina Mües. But the 22-year-old is doing much better now. She seems full of energy and has even gotten back on her bike, as she reported buten un binnen on Sunday. However, with reservations: “To the right, that will have to wait,” says Janina Mües. “When I feel safer, I’ll go back to the right.”

See also  17-year-old has blood clots due to infection