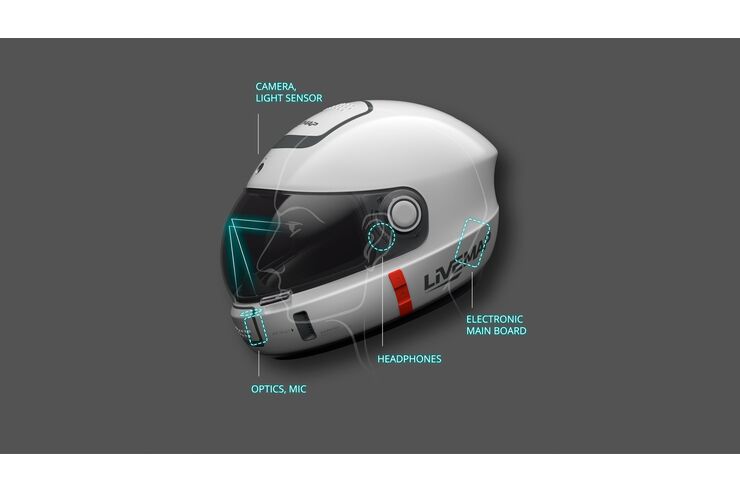 The Livemap motorcycle helmet should come with an “Augmented Reality” interface. Augmented Reality stands for augmented reality. The driver should be able to use the Livemap helmet to perceive more than just his five senses. For example, a ride in poor visibility – regardless of whether it’s rain, darkness or fog – with the Livemap helmet be less uncomfortable because, for example, it shows the course of the road via a head-up display in the area of ​​the helmet visor.

The helmet not only provides information about the route and the road being traveled on, but also the speed, calls or warnings, for example about the end of traffic jams, can be shown on the display.

Navi announcements, information about speed or other requested parameters as well as voice commands via Siri or Google Now are possible with the Livemap motorcycle helmet. Listening to music and using the phone is of course also possible.

The manufacturer advertises that in the event of an accident, a camera can help to prove errors and negligence on the part of road users, for example. In Germany, so-called dashcam recordings are permitted as evidence in an accident process, but they can also violate data protection regulations, such as the right to informational self-determination. So letting the camera record all the time without a specific reason is not always entirely unproblematic. Unless she owns z. B. a loop function in which older clips are automatically deleted and only those are archived where motion sensors register abnormalities.

Launch and price of the Livemap

The live map is currently the fifth prototype developed by the developers. However, this prototype already meets the helmet standard ECE 22.05. Tools and machines have already been manufactured for series production and software for Android and iOS has been developed. Next up is the market launch in the USA, Great Britain and Australia. The Livemap helmet costs around $2,500. This will be followed by the market launch in Europe and in the third step in Japan, Taiwan and Hong Kong.

$2,500 for a motorcycle helmet isn’t exactly cheap. But if you not only need a hands-free system, but also want to retrofit a navigation system on the motorcycle, a head-up display on the helmet and an action cam, you could possibly come up with a similar sum when adding them up, depending on how much the motorcycle helmet alone costs . For technology enthusiasts, it is definitely good news that a manufacturer is trying to launch a smart motorcycle helmet, when the last attempt with the Skully unfortunately failed.