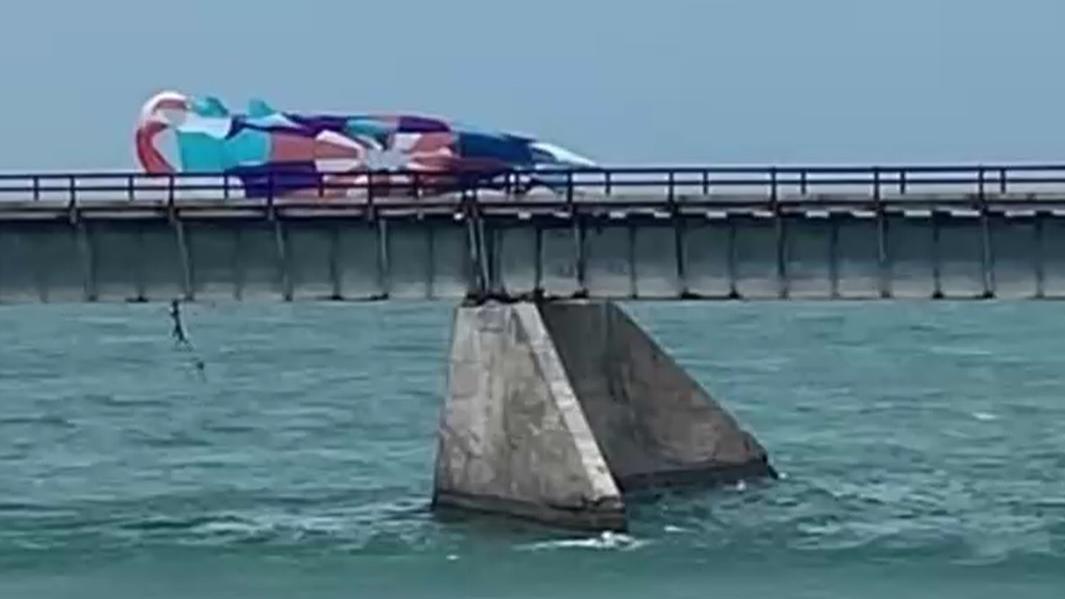 They want to have fun together on their vacation, a little later the mother (33) is dead and her ten-year-old son is seriously injured. A family in Florida (USA) had a serious accident while parasailing. The mother may have saved the lives of the two small children through her sacrifice. The driver of the boat apparently made a fatal mistake beforehand.

Around half past five on Monday afternoon, Supraja Alaparthi, her 10-year-old son Sriakshith and her 9-year-old nephew Vishant were harnessed to a boat and pulled into the air with the help of a large umbrella. In tourist regions like the Florida Keys, parasailing is a popular vacation activity – but for Supraja and the two children, this had devastating consequences.

Out of nowhere, strong winds suddenly began to whip in the coastal region. So strong that the vacationers and the driver of the boat lost control of the sail in the air. The three first hit the water and shortly afterwards with full force against a pillar of an old bridge. Supraja died on the spot.

Parasailing accident in Key West: did Supraja Alaparthi save the two children?

“I knew immediately something terrible had happened,” wrote John Callion, who was fishing nearby and rushed to help the victims, on Facebook. “From a distance I thought at first that the bridge would save them and stop the sail. Unfortunately, they hit a pillar and at high speed.”

While the 33-year-old mother died immediately after the accident, her son survived with serious injuries and her nine-year-old nephew only suffered minor injuries. “I think she probably protected the kids and took the impact,” Callion’s wife, Kasey Platt, told ABC. “That’s why they’re still alive.”

Reading Tip: Jet skiing, parasailing and the like are so dangerous on vacation

Parasailing: The boat’s captain cut the rope to the sail before the accident

Investigations into the horrific accident revealed that Captain Daniel Couch had intentionally cut the rope connecting the sail screen and the boat. Couch had steered the boat that had towed the vacationers. The 49-year-old was probably hoping to catch the three with his boat, a police officer told the Miami Herald.

Experts say that was a big mistake! “He should never have done that. That’s the golden rule. Never cut the rope,” Mark McCulloh, chairman of Florida’s Parasail Safety Committee, told the Miami Herald. “In flight you never loosen the rope. Because then you lose control completely.”

Reading Tip: Which fun sports are life-threatening – the safety check

The family members were on vacation in Florida, actually living in Illinois. “They left for Florida the day before vacation,” Anvit Tiwari, who is a friend of the injured children, told ABC. “I haven’t heard from them since.”

The Key West Coast Guard extended its condolences to the family. “It was a tragedy,” said the organization’s Jason Ingram in a statement. “We are investigating the accident and will do everything we can to make the waterways as safe as possible in the future.”

“My heart and prayers go out to the victims. I really did everything I could,” wrote Fischer Callion, who rushed to the family’s aid. “Never take life for granted. Things can change in a second.” (jda)