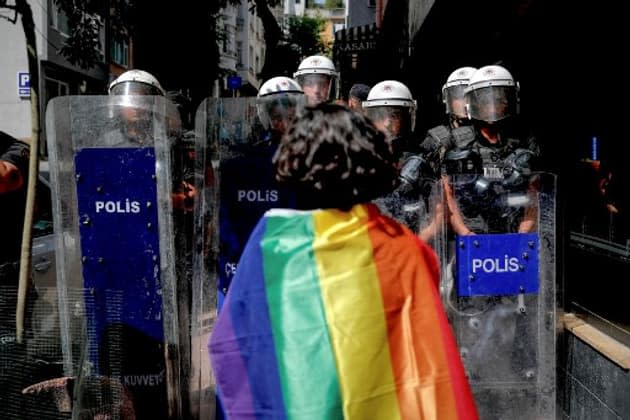 more than 150 arrests during the Pride march in Istanbul

The figures are instructive. Turkish police once again melted on Sunday on the LGBTQ + Pride March in Istanbul, ruthlessly arresting more than 150 people, activists and journalists, including an AFP photographer.

Before the rally even started, riot police raided several bars in the Cihangir neighborhood around the iconic Taksim Square and “randomly” arrested people there, it has been found. the AFP.

According to the count of the NGO Kaos GL, which campaigns for the promotion and protection of LGBTQ + people, “more than 150 people” were arrested and taken away by the police. They had not been released by early evening.

“You will never be alone”

Amnesty International called for their “unconditional and immediate release” on Twitter.

As every year now, the Pride March had been officially banned by the governor of the city but hundreds of demonstrators waving rainbow flags gathered in the streets adjacent to Taksim Square, which is completely closed to the public.

Chanting “The future is queer”, “You will never be alone”, or “We are here, we are queer, we will not go anywhere else”, the demonstrators then marched for just over an hour. in the streets of the Cihangir district, supported by residents posted at the windows.

Those arrested were taken in two police buses to the city’s main police station, an AFP videographer noted.

“They try to ban us, to prevent us, to discriminate against us and even to kill us every minute of our existence,” Diren, 22, told AFP. “But today is an opportunity to defend our rights, to shout that we exist: you will never be able to stop queers”, adds Diren, using the term which designates any form of altersexuality and refutes the biological definition of gender.

According to several witnesses, the police tried to prevent the press from filming the arrests. Bülent Kilic, an experienced and award-winning AFP photographer familiar with conflict zones, was handcuffed behind his back, his T-shirt ripped off and loaded into a police van with others. He had already been arrested last year in the same circumstances.

After a spectacular parade in 2014 of more than 100,000 people in Istanbul, Turkish authorities have banned the Pride March year after year, officially for security reasons.

VIDEO – Brazil: four months before the presidential election, the LGBTQI+ march calls for voting “with pride”