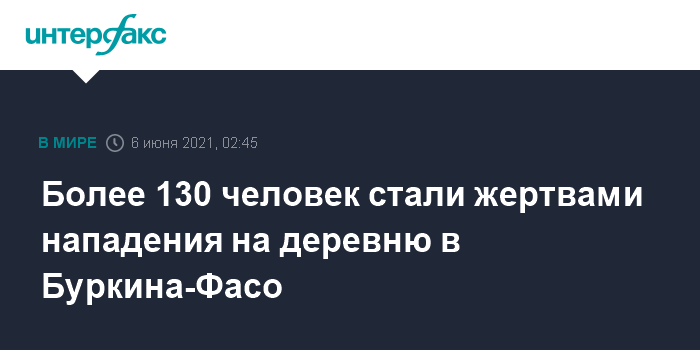 Moscow. June 6. INTERFAX.RU – The death toll has risen to 132 as a result of the militants’ attack on the village of Solhan in the Yaga province in northern Burkina Faso, a spokesman for the government of the country, Useni Tambura, told reporters.

Among the dead – seven children, the report says. About 40 more people were injured. The country has declared 72 hours of mourning. UN Secretary General António Guterres said he was outraged by the attack.

Although no one has claimed responsibility so far, the media suspect of the attack by jihadists from Al-Qaeda and ISIS (both structures are banned in the Russian Federation as terrorist organizations), which are increasingly active in the Sahel region of West Africa passing through Burkina Faso. despite the presence of more than 5 thousand French peacekeepers there. More than 1.1 million people in Burkina Faso were forced to flee their homes due to the threat to their lives, becoming internally displaced persons.

Earlier, on Saturday, it was reported about 100 deaths as a result of a militant raid. Another attack on Friday evening killed 14 people in the village of Tadaryat, about 150 kilometers north of Solkhan. Last month, 30 people were killed in a terrorist attack in eastern Burkina Faso.

READ  LIVE | 1994 next for corona prick, Germany wants to get rid of mouth caps step by step - De Gelderlander