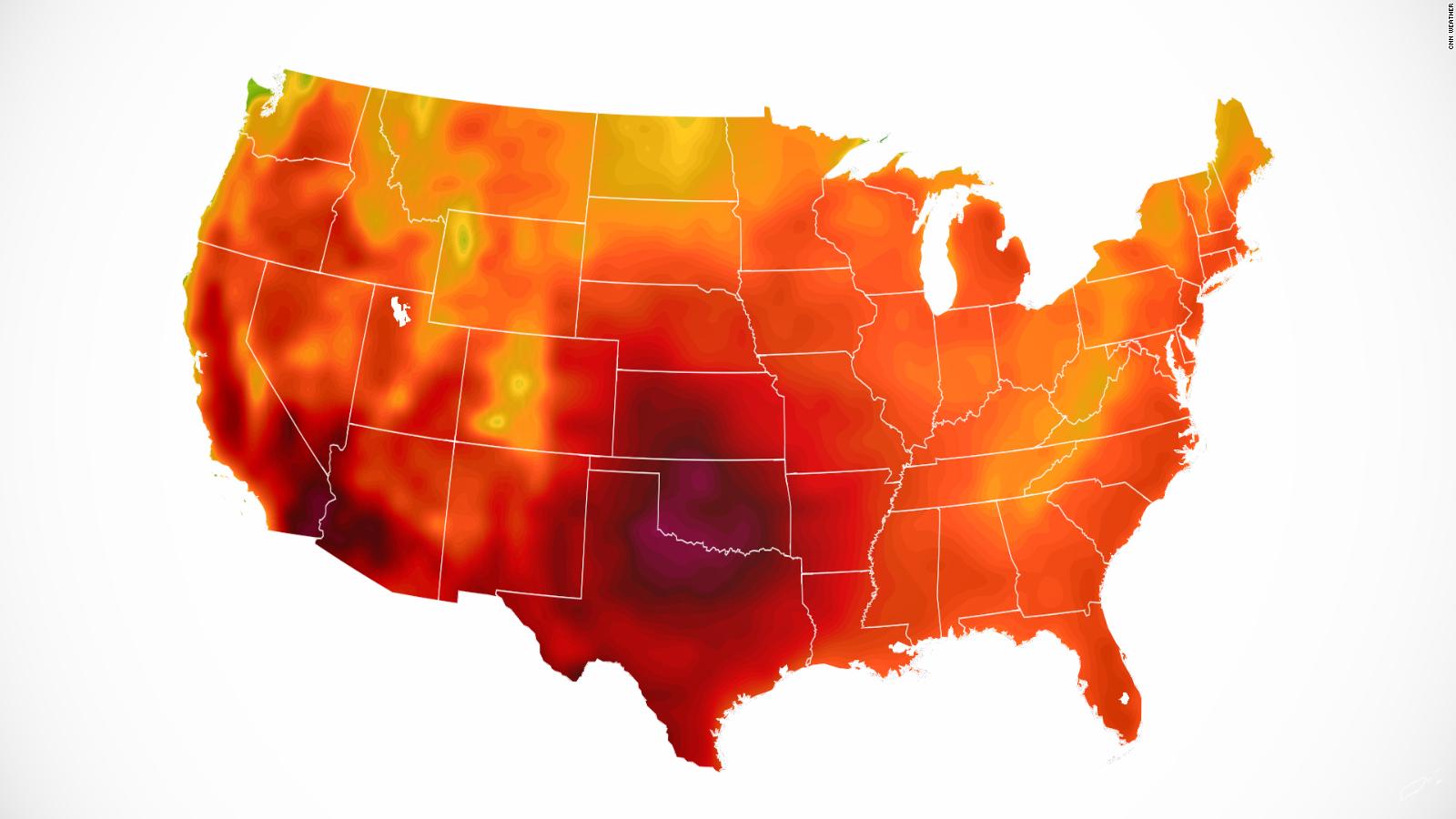 More than 100 million people in the US under heat alerts

(CNN) — Heat advisories span more than 20 states Tuesday and Wednesday in the southern Plains and parts of the Northeast, with temperatures topping the century mark for 60 million people over the next week. All this while a similar heat wave is pushing Western Europe to record temperatures.

“Dangerous heat will continue to affect large parts of the US this week, with more than 100 million people now under excessive heat warnings or heat advisories,” the Weather Prediction Center said.

This means that a third of the US population is under heat advisories and excessive heat warnings for Tuesday and Wednesday, and more than 80% of the US population (about 265 million Americans) will experience a maximum temperature above 32.2 °C in the next seven days.

The orange and red colors show where high temperatures above 32.2°C are forecast on Wednesday.

The highest temperatures, which will exceed 37.7 ° C, will again be concentrated in the southern Plains.
More than two dozen record highs are expected to be reached between Tuesday and Wednesday in the southern United States, including Texas, Oklahoma and New Mexico, and the East Coast will not be far behind.

Parts of the Northeast will also see temperatures close to daily records on Wednesday and Thursday.

“Heat advisories are also now in effect for Wednesday for portions of the Northeast, including the I-95 corridor from Philadelphia to Boston, where heat index values ​​are forecast to reach near 100 degrees. “said the Weather Prediction Center (WPC).

Southern Great Plains gets another dose of intense heat

A pedestrian walks with a bag covering her face to block out the sun during a heat wave in Houston, Texas. Credit: Mark Felix/Bloomberg via Getty Images

After a day of record heat, on Monday, the southern Plains finds itself dangerously hot again.

Dallas came close to its daily record of 43.3C on Monday, but hit 42.7C, making it the hottest day of the year so far.

But this Tuesday will be worse.

Temperatures are forecast to reach 43.8°C in the area, surpassing the daily record of 42.2°C.

The sweltering heat has put a strain on the Texas power grid as the state expects another day of record power demand.

Excessive heat warnings and heat advisories are in effect through Wednesday for north and central Texas.

“Air temperatures will rise from 40.5°C to 43.3°C in the warning area, with heat index values ​​above 40.5°C degrees in the alert area,” the National Weather Service said. in Fort Worth.

Critical fire danger expected Tuesday as winds increase and hot temps and low humidity continue. Be careful with activities that can start fires! Please do our local fire fighters a favor. They’d rather spend the afternoon with A/C.
#dfwwx #ctxwx pic.twitter.com/7IJ84moiQL

Oklahoma City could post highs near 110 degrees on Tuesday, breaking its daily record of 108 degrees set in 1936.

“The last time we had a substantial stretch of heat was in 2011, when we had 63 days of 100°F or higher,” said Vivek Mahale, a meteorologist with the Norman National Weather Service.

Mahale expects the above-average heat to continue through at least Sunday, with every day reaching at least 37.7C. Oklahoma City’s Will Rogers World Airport has seen nine days above 100 degrees this month.

The meteorologist advised that the best thing to do to prepare is to monitor vulnerable populations, since temperatures will be between 2.7 and 3.8 degrees above normal.

“We want to stress that you have to keep an eye on friends, family and neighbors during the heat wave, especially susceptible populations like the elderly,” Mahale said.

New York, Boston and Philadelphia brace for a sweltering week

Heat advisories are in effect for Wednesday for the Northeast, including New York City, Boston and Philadelphia.

Heat index values, the temperature felt when heat is combined with humidity, could exceed 37.7°C in some areas, creating dangerous conditions for residents of the Mid-Atlantic and New England.

Hot and humid conditions will combine to produce maximum heat index values ranging from the mid 90s to around 100 on Wednesday and Thursday. A Heat Advisory is in effect across the entire area. https://t.co/6NEWpQSiDp pic.twitter.com/jdnYg3rsLo

The heat and humidity will not only affect the coast. Upstate New York could also see temperatures well above average.

Albany, New York, is surpassing its average of 28.8°C for this time of year, and the city could approach its record high of 36.1°C on Wednesday due to the sweltering heat.

To make matters worse, the humidity combined with the heat will make some areas feel 2.7 to 5.5 degrees hotter.

“This is going to be a bit [más cálido] than the typical hot and humid weather we get in July,” Mike Evans, a meteorologist with the National Weather Service office in Albany, New York, told CNN.

Evans said dew points could reach 21C on Wednesday, which is when the humidity becomes “very noticeable”.

Portions of Massachusetts will hit record highs as early as Wednesday, when temperatures hit highs of 90 degrees, and continue through the rest of the week in the Northeast.

“This is going to be the hottest day we’ve had so far, this summer. We really haven’t had a very hot summer here, at least in the Northeast,” Evans said.

The United States is not likely to see much relief over the next week. The Weather Prediction Center expects above-average temperatures to last well into next week in most of the lower 48 states.