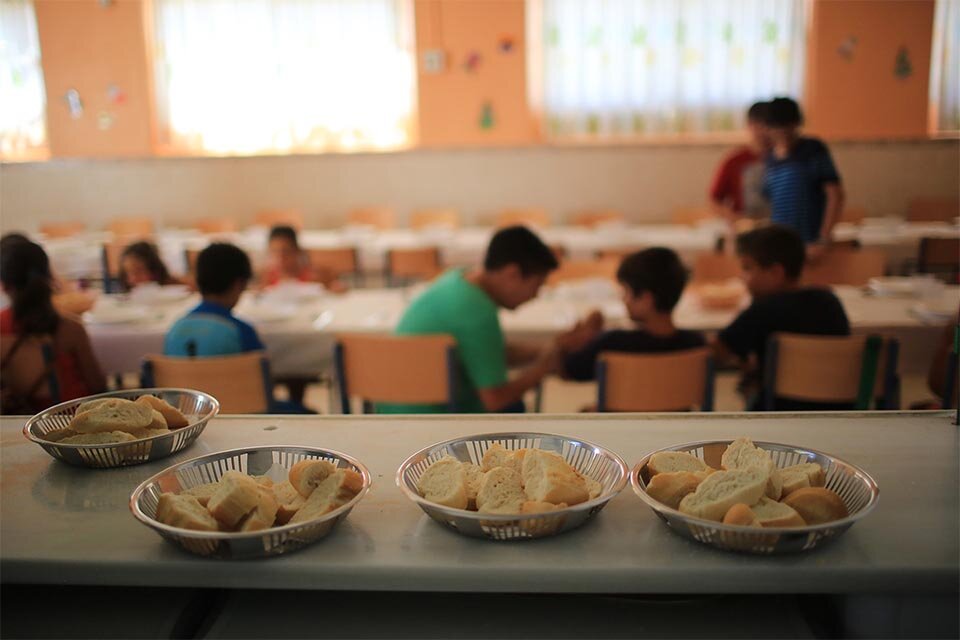 School canteens are still open in January, with variable population

The assistants of the institutions provide the food, with an attendance that varies between 80 to 20 percent of the students, depending on the neighborhood. In addition, there is more time to listen to them and some violence is revealed.

It’s January in Rosario. Outside the thermometer reads 32°. The school assistants who are in charge of the canteens do not stop, since morning they are ready with their uniforms to take care of the food. At noon the dining room is ready to receive the children. Some arrive alone, walking quietly, some playing and chatting. Others arrive with their mother by the hand, leave them at the door and wait for them outside. A dining attendant receives them and escorts them to the table. The dishes are generous and can be repeated, just like the fruit and, occasionally, some ice cream. They are students from three schools in Rosario, from the west, southwest and Echesortu neighborhood.

During the school year almost all the students stay in the dining room, but during the summer the amounts that are demanded depend a lot on the school. In the western zone they went from 800 servings to 600 and in those in the southwest and Echesortu from 1,200 to 25 or 35. The work teams of each institution are made up of a treasurer and dining room assistants, but on holidays it is reduced by half.

“During the year 600 and something come, now 30 at the most, 35, it depends on the day and it is renewed because they fall some day yes and no other. Now they are few and they can repeat. In class time, when they are given supreme or medallion, it cannot be repeated, but now it is, at least half. Boys like it the most. They repeat up to 3 times, they eat very well. Today, for example, they made noodles with chicken and white sauce and they loved it” says a school assistant and in the background a girl happily looks at the two bananas that she is holding in her hands.

See also  Putin has arrived in Belarus and is recruiting "tactical exercises" of the Russian troops with the dictator Lukashenko.

Another attendee asks “Did you eat yet?”, while a little boy brings his full plate “Don’t you like it? What don’t you like?” He points to the sauce with his finger. “Do you want the noodles without sauce?” “You can’t do this attention during the year,” says a colleague who watches the scene. It’s just that times are too short when there are 300 boys and girls impatiently waiting for their food. Between breakfast, washing the cups, preparing lunch, setting the table, serving the dishes for the first shift, cleaning up so that the second shift finds the place in good condition, washing the dishes and preparing the snack, there is no time left to talk with them. children.

In summer everything is friendlier, it is easier to keep track of who is going to eat. “We already know who is coming. The schedule is until twelve, but on rainy days we wait a little longer, we know that there are some who will surely come. We are missing the 3 little brothers and two others, they still have not come and it is strange, maybe they come later. We are still waiting” comments another of the workers from the southwest zone. They also explain that some do not come because they get up very late and end up missing lunch, other times they arrive just at closing because they have a hard time getting up.

In summer you can indulge in some dessert or meat more often on the menus. During the year it is more difficult to sustain it because the budget is very limited. The provincial government updated the amounts of the value of food services in October 2022, they are $44.31 for the glass of milk and $106.40 for the dining room, once a month a reinforcement of $9.05 and $21.74 is assigned respectively, according to it can be seen published on the ATE Rosario website, together with a request for a budget increase. From these insufficient amounts, we must subtract the 10% that goes to the operating expenses of the canteens (purchase of hygiene materials, caps, gloves, etc.). The national government made an extra contribution, which it has not paid since December 2021. It consisted of an amount of $14.35 per cup of milk.

This budget does not guarantee quality food for children who attend soup kitchens, the diet is rich in carbohydrates and ultra-processed foods, which in continuous consumption can cause permanent damage to health, such as obesity, cardiovascular diseases, diabetes and some types of cancer. The recommendations on the limitation or non-consumption of ultra-processed foods can be found on the website of the Ministry of Health of the Nation or replicated in the “Food guides for the Argentine population” of the official website of the province.

The dining rooms, especially in times when there are no classes, become the meeting space, where students can socialize more freely. It is also a place of support for children and it is not uncommon for problems of abuse and violence to arise when school assistants listen.

In the west zone school they tell it like this: “Here the boys sit, chat, tell about things that happen to them at home, even abuses that they tell us about. In this situation, we talk about it with the moms more than anything. I asked a girl why do you run away from home? There must be some reason because your house is the most beautiful thing in the world, and she tells me -no, I’m not sure in my house. There was something there and in those situations we are helpless”.

Some dining rooms are converted rooms, others are spacious and designed for that purpose. However, there are things that are systematically missing, such as the adequate elements to be able to take food in large portions from the kitchen to the dining room. During the tour, there were several comments from the staff about problems of back pain, impingement and hernias due to the weight they have to carry and unload, the difficulties in carrying water to flush the room, the weight of the containers, the emptying of the fountains , things they do every day repetitively.

Impeccable kitchens, beautiful but thought with the wrong logic for schools. In one of them, after showing the new kitchen, they clarify that “they remodeled everything but the structure they made is not for cooking, now they made the sinks small, the kitchen is very high, the counter is tilted outwards, we don’t have a fridge, bah it’s very young… She is pretty, but she is not well.”

Some kitchens continue to give food at 80% of their normal capacity, in others that percentage drops to 20%. The question is where do the girls and boys who do not go or who find the schools closed eat? Many and many will have the possibility of eating at home, some will pass by.