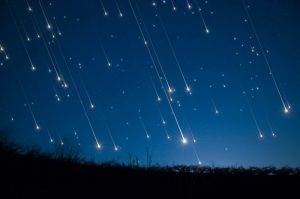 Where did the first building blocks of life on earth come from? For a long time it was assumed that more complex organic molecules such as DNA building blocks, peptides or amino acids were formed in terrestrial realms – in submarine vents, hydrothermal pools or liquid-filled pores in the rock.

Synergy of space and earth

But in the meantime, another scenario is increasingly coming into focus. According to this, the origin of life on earth could have had both a cosmic and an earthly component. Unlike the panspermia hypothesis, according to which life itself is said to have arrived on earth in the form of simple cells from the cosmos, the current scenario envisages a kind of synergy effect between “heaven” and earth: organic molecules that are in space formed and arrived on Earth could have provided the building blocks that then evolved on Earth and led to the emergence of the first protocells.

There were plenty of transport options from space to earth: Especially in the early days of the solar system, the young earth was hit by countless remnants of planet formation, including comets from the icy outer regions of the solar system. In addition, around 15,000 tons of interplanetary dust still rains into the earth’s atmosphere every year – around half of it penetrates to the earth’s surface, as analyzes of Antarctic snow samples in 2021 suggested.

But can organic molecules form under space conditions at all? The answer to this question is crucial to the origin of life on Earth. Because it determines whether and which building blocks comets, meteorites or space dust can have brought to earth.

Meteorite analyses, laboratory experiments and space missions have now provided initial answers to these questions. As early as 2011, NASA researchers detected several nucleobases – the chemical letters of the DNA code – when analyzing meteorite samples. Among them were three DNA base variants that do not occur on earth or only in negligibly small concentrations. “The discovery of nucleobases that are atypical for terrestrial biochemistry is strong evidence of an extraterrestrial origin,” the scientists explain. In 2022, the last two of the five DNA bases found in RNA and DNA were also detected in meteorites.

Laboratory experiments with comet nuclei artificially produced under space conditions also confirmed that the sugar molecules that form the backbone of the genetic molecule can also be formed in the ice of these chunks. In 2014, an experiment with a research rocket proved that intact DNA can survive unprotected space in space.

Space probes such as Rosetta, which examined comets at close range and analyzed comet dust, provided even more evidence. The probe detected the amino acid glycine in the gas and dust envelope of the comet Churyumov-Gerasimenko – and thus one of the basic building blocks of the second important group of life molecules, the proteins. Alcohols and other organic molecules have also been found on comets.

But how complex can such chemical building blocks of life become in space? And where are they created?