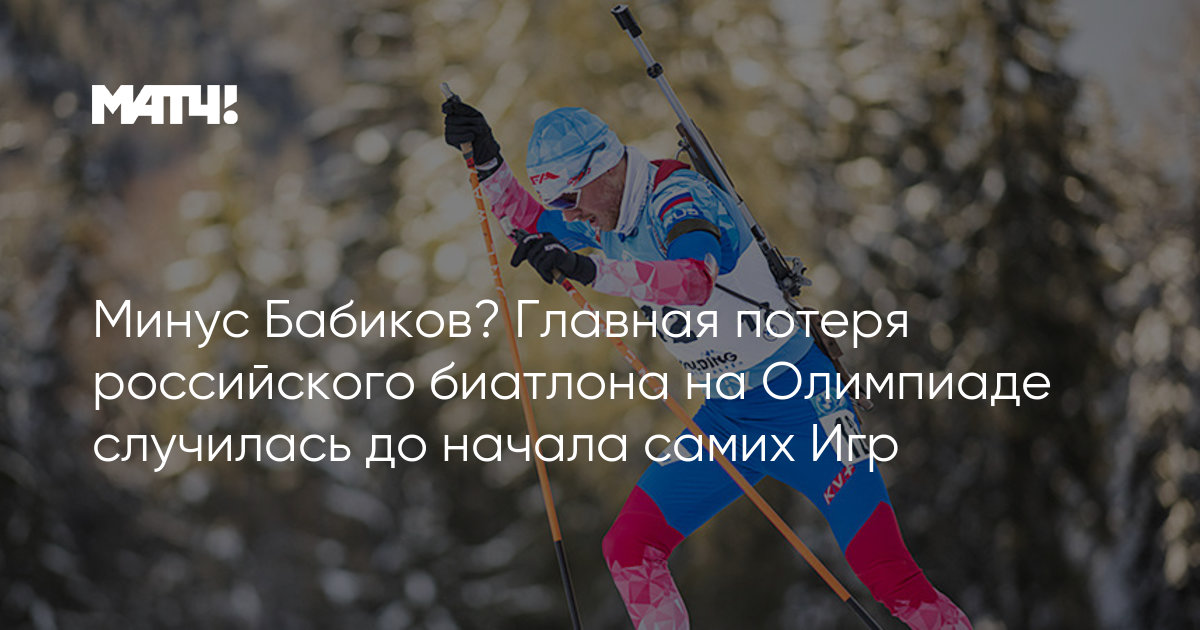 Minus Babikov? The main loss of Russian biathlon at the Olympics happened before the start of the Games themselves

The men’s team will go to Beijing with five of them.

The men’s team will go to Beijing with five of them.

The World Cup stage in Ruhpolding was considered one of the most significant for our team on the eve of the main start of the four-year period. In addition to forming the squad for the trip to Beijing, it was important to understand how many people could be included in the men’s team.

The full quota for biathlon teams is six people. You can count on it only if the team is in the top 3 of the Olympic quota rating. A table is formed based on the results in the Nations Cup of the past and current seasons (up to the second German stage). The Russian men’s team, which started the season unsuccessfully, was in fifth place before the races in Oberhof, ahead were the teams of Norway, France, Germany and Sweden. We were separated from the third position by 111 points, so in theory we could only catch up with the Germans and the Swedes.

The pursuit of them started well, because Reztsova came to the aid of the men, who, together with Anton Babikov, won the single-mixed double, reducing the gap to 56 points. Crazy emotions from the work done did not even allow Christina to recover emotionally for the next start. The victory brought points to the treasury of the women’s team, but the team of Mikhail Shashilov no longer had a chance to travel to the capital of China with six of them.

For six quotas, the men had to perform successfully in the sprint and in the relay at the stage in Ruhpolding. Fans expected that the relay race would be the decisive confrontation, but everything was decided on Thursday: none of the Russians ended up in the top 20, and the lead grew to 79 points. The best time of ours was shown by Maxim Tsvetkov (21st place), the biathlete himself refused to be happy with his result: each person from the team fought more for the sixth quota than for himself. In the relay, if we win, we can only add 60 points. This is not enough to get into the top 3.

Is this a serious loss at the Olympics? Undoubtedly. In the individual races, the Russian team will be represented by four biathletes, as well as the top teams. Everything is like everyone else. But is it possible to be sure, for example, for the relay race, on which Yuri Kaminsky counts so much? The risk of being left without an athlete in the conditions of covid is very high, therefore, having lost, for example, two biathletes, we may be left without a potential gold medal.

Five people in a team instead of six is ​​an extra headache for coaches. For sure, only Loginov will go to the Games. With six quotas and a healthy Latypov, Alexander Povarnitsyn would certainly be superfluous. Now Babikov can also fly past Beijing. Following the results of the sprint in Ruhpolding, where the single-mix champion took only 71st place, Kaminsky was asked a clear question:

– How much did Anton cut off his chances for a trip due to missing the pursuit?

“Very much,” the head coach replied.

It’s a shame to unhook Babikov, because he fought great at the IBU Cup and joined the team well at the World Cup, even though Serokhvostov joked that sand was pouring out from under Anton. At the right time, Tsvetkov and Karim Khalili showed themselves well, which significantly increased their chances.

The current Russian national team has great biathletes who shoot from time to time, but, as practice shows, you need to shoot at a certain time, because there are simply not enough places for all.