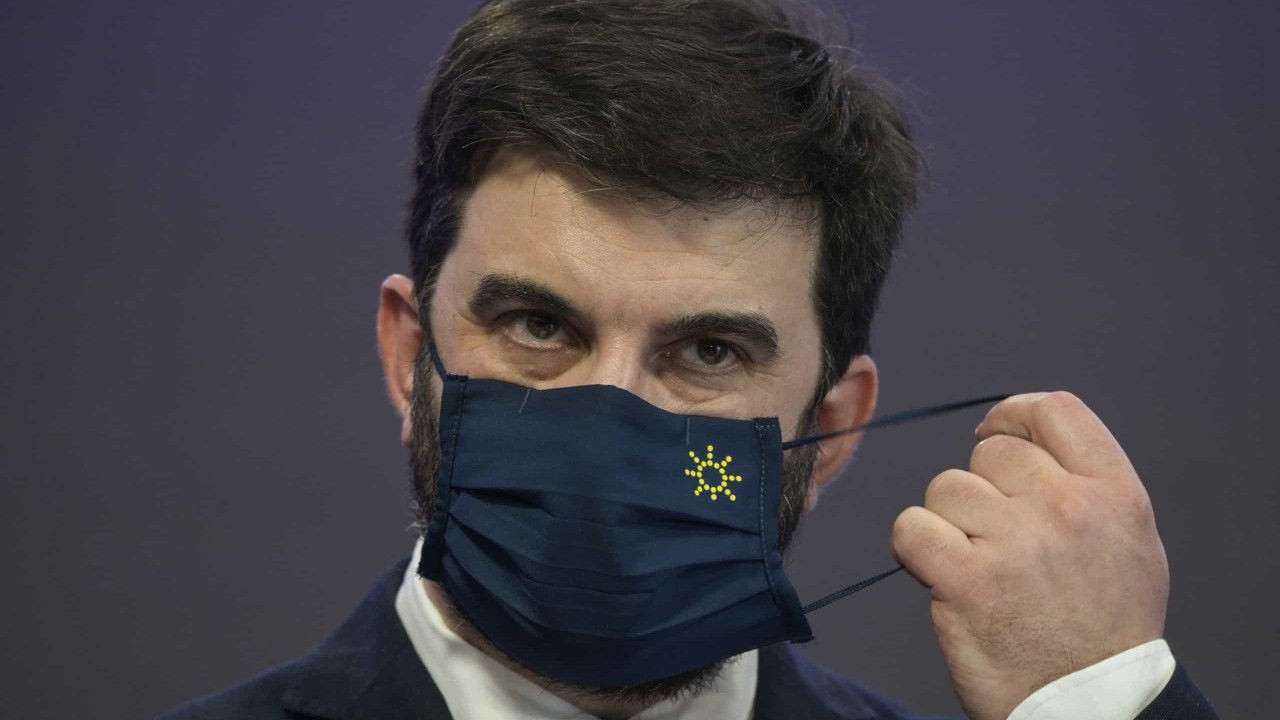 Pthis tuesday, portugal registered the highest number of daily cases of Covid-19 since 10 february. According to data released by the General Directorate of Health (DGS), they were diagnosed 4,153 infections and nine more deaths in the last 24 hours. In total, Portugal has 916,559 cases of infection and 17,182 deaths. The number of recovered people increased to 852 thousand. Active cases continue to rise.

As for transferability, the Rt at national level is 1.14 and on the mainland it is 1.15 (a slight decrease compared to the last update).

The National Health Surveillance Agency (Anvisa), the regulator that approves the use of medicines in Brazil, today authorized two clinical trials on vaccines against Covid-19.

In these interactive maps, you can consult the evolution of the coronavirus in Portugal and in the world.

Follow here BY MINUTE the latest developments about Covid-19 in Portugal and around the world.

00h03 – We have suspended today’s registration here, but you can continue to accompany us on Thursday morning. You already know, check the information on the DGS website and always follow the communications from the competent authorities. If you have symptoms:

23h58 – Argentina today surpassed 100,000 deaths by Covid-19 in a process marked by severe restriction measures and an ideological vaccination campaign that leaves the country vulnerable to the imminent arrival of the Delta variant.

With 614 new fatalities, Argentina reached 100,250 deaths, occupying the 11th position in the ranking of deaths, only surpassed, in Latin America, by Peru, Brazil and Colombia

“It’s a tremendously painful figure. It has to make us reflect on what we could have done better, especially so that we don’t continue to make mistakes going forward,” asked Fernán Quirós, health minister of the Federal District of Buenos Aires, governed by opposition.

23h28 – The government hopes that 2021 can be a year of “complete recovery” of the sport, recognized today the minister of tutelage, Tiago Brandão Rodrigues, through the evolution of the national vaccination program against Covid-19.

23h11 – Infarmed decided to open, this Wednesday, an investigation into an alleged case of adverse reactions to the Janssen vaccine, at the Covid-19 vaccination center in Mafra.

So far, no suspected defects have been reported.

22h47 – The National Council of Health Secretaries (CONASS) revealed this Wednesday that 57,736 new infections were diagnosed and another 1,556 people died in Brazil. In accumulated terms, the country has 19,209,729 confirmed cases and 537,394 deaths.

22h33 – Portugal will provide Angola with 50,000 doses of Covid-19 vaccines to support Angolan authorities in the vaccination plan. Vaccines arrive in Luanda tomorrow, it was announced today.

22h03 – The Minister of Education, Tiago Brandão Rodrigues, said today that he hopes that by the beginning of the next school year, in September, younger students can be vaccinated against Covid-19.

“We strongly believe that vaccination of younger people should take place as soon as possible, if possible still in August“, said the government official, sharing the wishes previously expressed by the Minister of Health, Marta Temido.

20h23 – PRO.VAR — National Restaurant Association asked the Government today, in Porto, for the immediate elimination of self-tests to Covid-19 and wants fixed and mobile health units at the doors of restaurants to carry out PCR tests.

19h56 – The Balearic Islands, Spain, and the British Virgin Islands have been “downgraded” to the ‘yellow list’ of travel because of the rising risk of Covid-19, announced the British government, so some travelers will have to quarantine on arrival in England.

19h40 – South Africa has suspended administration of Covid-19 vaccines due to the violence that has plagued the country, said today the country’s health authorities, which is facing an exponential increase in cases.

19h22 – Madeira registered today 23 new cases of Covid-19 and five recovered, announced the Regional Directorate of Health (DRS), noting that the region now has a total of 138 active cases.

19h20 – The Regional Government of the Azores clarified today that Higher Education students residing in the region who study abroad must register on the online vaccination portal against Covid-19 to be inoculated during the summer vacation.

19h17 – French health authorities announced this Wednesday that 8,875 cases of contamination were detected and six more people died on the last day. France totals 5,829,724 confirmed cases and 111,442 fatalities. The number of recovered amounts to 386,839.

18h53 – Spain reported 26,390 new infections and 10 more deaths within 24 hours, according to data released this Wednesday by the Spanish Ministry of Health. In global terms, the country accounts for 4,041,474 cases of contagion and 81,043 deaths.

The accumulated incidence continues to rise. In the last 14 days, the incidence of cases in Spain stood at 469 cases per 100,000 inhabitants.

Infographics and other materials on the coronavirus: https://t.co/kyYeapDC2N

18h29 – The Ministry of Health guaranteed that the indicators proposed today by the Medical Association for the risk matrix are already considered in the decisions on pandemics and sent any changes to after the next meeting of Infarmed.

“The Ministry of Health monitors and regularly discloses the various indicators that the Medical Association suggests to be included in the risk matrix. These indicators have, moreover, always been taken into account in decision-making processes”, said the office of Marta Feared in Lusa.

18h26 – The Association of Schools of Public Health in Europe considered that Europe was “at a crossroads”, warning that too much speeding up the abandonment of preventive measures could jeopardize the control of the pandemic and part of the vaccination efforts.

18h06 – The European Medicines Agency (EMA) and the European Center for Disease Control (ECDC) today said it was “too early” to come up with a decision on the need for a hypothetical third dose of Covid-19 vaccines.

“Currently, it is too early to confirm whether and when a booster dose for Covid-19 vaccines will be needed, because there is still not enough data from ongoing vaccination campaigns and studies to understand how long protection against the vaccines will last, also considering the spread of variants”, the two European institutions said in a joint statement.

18h00 – A deputy, who was this morning at meetings in Parliament, tested positive for Covid-19 and the services of the Assembly of the Republic identified 31 contacts at risk, the Observer said.

17h25 – The United Kingdom reported, this Wednesday, 49 deaths due to Covid-19 and 42,302 new infections, according to the latest balance of British authorities. This is the highest number of daily infections since January 15th, and the eighth day in a row that they exceeded 30,000.

16h57 – The Chairman of the Medical Association considers “fundamental” that the Directorate-General of Health (DGS) take a decision on the vaccination of children and young people.

“These situations are complicated, but decisions have to be taken”, said Miguel Guimarães, in statements to Lusa, at the end of the presentation session, at the Ordem dos Médicos, in Lisbon, of the new indicator to assess the state of the pandemic conceived by a team of experts.

“I think that very soon the Directorate-General for Health will take a decision on this matter, based on the contributions of the experts.“, believe.

16h55 – The National Discos Association considered today that the support to the sector announced by the Government “is late, although welcome”, and insisted that there are conditions for reopening, after 16 months of closure due to Covid-19.

16h53 – Italian health authorities reported this Wednesday the registration of a further 2,153 new cases of new coronavirus infection, the highest figure since 9 June. Authorities report a further 23 deaths over the past 24 hours.

16h28 – The European Center for Disease Control (ECDC) believes that the Delta variant of the SARS-CoV-2 virus constituted around 90% of infection cases in the European Union (EU) at the end of August and calls for full vaccination.

16h06 – The Open House modality was extended this Wednesday to people aged 40 or over, announced the task force of vaccination against Covid-19.

The task force points out, however, that this possibility is aimed only at those who have not been infected with SARS-CoV-2 in the last six months.

15h43 – Indonesia today announced that it had recorded for the first time more than 54,000 cases of the new coronavirus in a single day, surpassing recent numbers of daily infections in India, whose outbreak is declining, and becoming a hotbed of crisis in Asia.

The Ministry of Health reported 54,517 cases and 991 deaths in the last 24 hours, bringing the totals since the beginning of the pandemic to 2.6 million infections and more than 69,000 deaths.

15h32 – The presence of women in the news about Covid-19 is higher than that they have in other topics, but this does not translate into more voice, and the quality of the content is “worse”, according to a study released today.