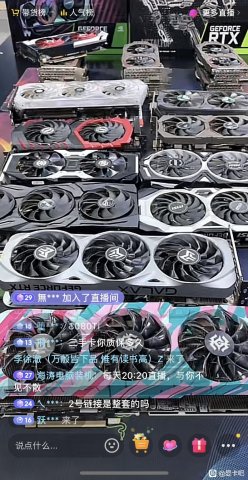 06/21/2022 at 4:41 p.m
von Oliver Jaeger –
Currently, due to declining cryptocurrencies such as Bitcoin and Ethereum, miners and internet cafe owners who once bought up large numbers of graphics cards are now prompted to get rid of their cards. Meanwhile, this also happens during live stream auctions in China.

The graphics card market is currently being shaken up as the cryptocurrencies Bitcoin and Ethereum have suffered massive losses in value and GPU miners are therefore looking to get rid of their graphics cards as quickly as possible. This can sometimes be seen in China and South Asia, where miners and Internet cafe owners now have hundreds of their models for sale. Some of the latter stocked up on mining cards during the corona pandemic, when the Bitcoin price rose sharply at the same time to compensate for the losses caused by a lack of customers. But now the day of parting seems to have come for them too.

Hundreds of graphics cards also sold below MSRP at auction

Again Twitter user Hassan Mujtaba (known from Wccftech), miners from China and internet cafes in South Asia are putting up a number of their graphics cards in auctions, which are then streamed live. Models like the Geforce RTX 3060 Ti should be available for prices between 300 and 400 US dollars and thus below their RRP. The dilemma is great, because the crypto miners are meanwhile faced with a difficult decision: either sell the graphics cards as quickly as possible in order to keep at least part of their profit or continue mining in the hope that the crypto currencies will recover.

Ethereum also has to keep in mind the change from Proof of Work to Proof of Stake, which is expected to take place between the third and fourth quarters of this year. Proof of Work is based on GPU performance in crypto mining and would thus become obsolete. Chinese miners and Internet cafe owners have apparently opted for the first option and are getting rid of their graphics cards. In addition to the Geforce RTX 3060 Ti, for example, a Geforce RTX 2060 should also be easy to find under its RRP.

However, anyone who wants to buy such a mining card should note that such cards are of lesser value simply because of the previous intensive use. At the very least, those cards sold through auctions should be labeled as former mining equipment.

Those: Hassan Mujtaba via Videocardz