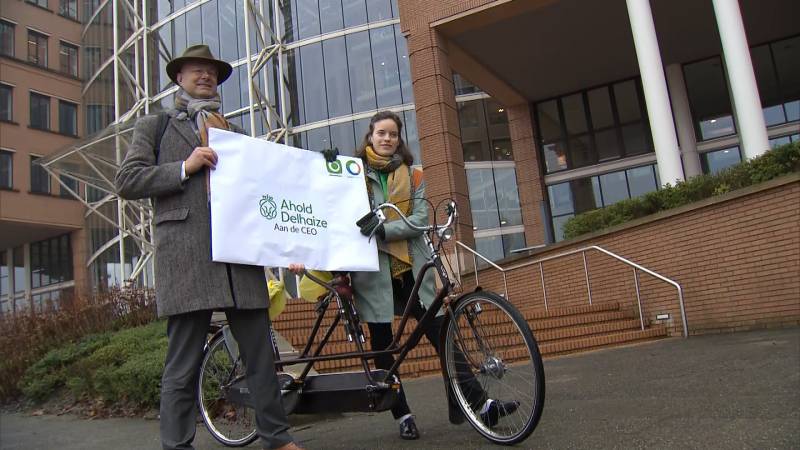 Milieudefensie Ultimatum stands for more, because ‘Shell also started with a letter’

A letter from Milieudefensie to 29 large companies this morning, calling for a drastic reduction in CO2 emissions before 2030, and the threat of legal action. It is reminiscent of Milieudefensie’s climate victory over Shell in May last year. Will this action also lead to lawsuits or will it remain a threatening letter that – thanks to the previous victory over Shell – is already more than just a piece of paper.

“It also started with a letter at Shell,” says Milieudefensie director Donald Pols. “In the Netherlands we now start with a good conversation. Only if that does not have the desired outcome, we consider going to court.”

Milieudefensie counts on moral responsibility and points to the ‘fathers and mothers, grandfathers and grandmothers’ who work for these companies. “Their grandchildren are concerned about climate change. We call on them to take action themselves. Then there is no need for a lawsuit.”

But it is also not excluded. Or as Pols puts it himself. “After Shell, it is now the turn of the other 29 polluters. If we started a lawsuit against them now, we could also win it.”

Milieudefensie’s move towards 29 large emitters is part of a broader development in which companies are held accountable for their climate obligations, says Elbert de Jong, professor of private law at Utrecht University.

“That is because of the Shell case, but it takes place more widely and all over the world,” says De Jong. “The Shell case is creating enormous momentum. There is now a court decision with which Milieudefensie can protect itself. It has a warning effect.”

A letter may have been a tactical choice, De Jong thinks. “But a letter is also the first means you use to influence the policy of companies. Before you file a lawsuit, you must consult with them. It is therefore also essential from a legal point of view.”

In addition, going to court is an expensive process. “A legal battle like this can easily cost you five years. Not useful if you want to quickly combat climate change – within eight years, as Milieudefensie writes in their letter.”

In addition, the letter appeals to 29 companies. “You can’t just deal with these clustered in one case. It would mean that several cases would have to be conducted over several years. Then it pays to first talk to each other,” says De Jong.

Schiphol, KLM, Tata Steel: there are a number of ‘usual suspects’ among the companies that Milieudefensie calls on to come up with a strict climate policy. Also in the list are companies that do not emit a lot of CO2 directly themselves, but through their customers, such as Rabobank and ABN Amro.

ABN calls the action a ‘good incentive’. Richard Kooloos, director of Sustainable Banking at ABN Amro, says that the company must come up with an action plan within three months and Milieudefensie otherwise go to court. a challenge.

“On the other hand, we are also happy with Milieudefensie’s help: because there is a threat of a lawsuit, but the first message is: let’s keep talking to each other. And we will do that.”

FrieslandCampina also says that the climate is not up for discussion. “What Milieudefensie is all about is speed and how. We need time, money and knowledge so that the members of our cooperative can become more sustainable. That won’t happen overnight.”

The fact that Milieudefensie is now explicitly asking the company how they are going to make it more sustainable is something FrieslandCampina is “working hard on”.

Over the next three months, FrieslandCampina will look at its own plans and continue to implement them. “But we are a company and our plans are sensitive to competition. Full disclosure of our business plan is not the way to go.”

The lawsuit against Shell has been closely followed by the company. “I don’t think there has been a CEO who has not noticed this. It means that we are once again looking at whether we are going fast enough with our sustainability efforts. That is the role of Milieudefensie and that is only a good thing.”