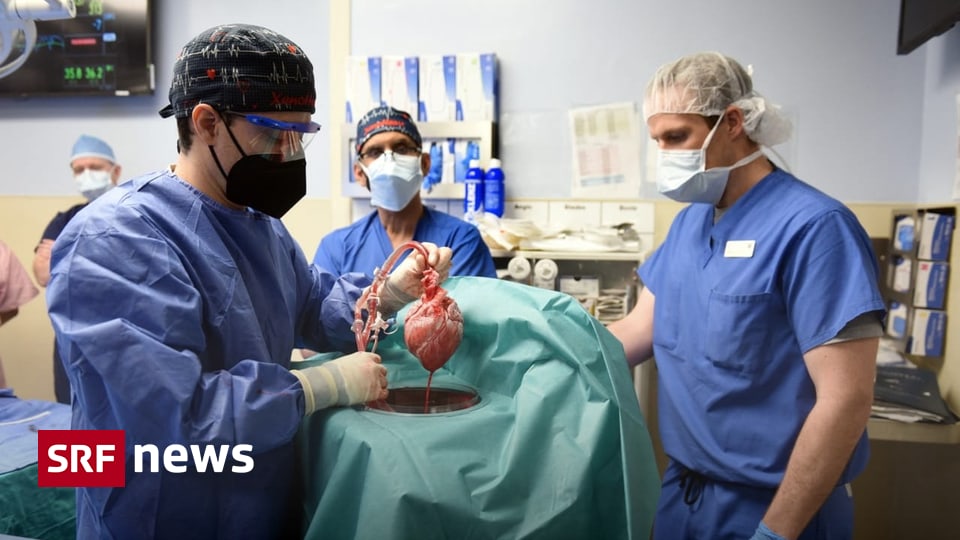 Milestone in medicine – Successful transplantation: “Pigs are ideal in terms of weight” – News

For the first time in the United States, a pig heart has been successfully transplanted into a human. The 57-year-old patient on whom the procedure was performed suffered from life-threatening heart disease. The genetically modified pig heart was attached to the patient in an eight-hour operation. How does it work and does this approach have a future? Heart surgeon Franz Immer gives the answers.

Cardiac surgeon and director of Swisstransplant

As director of the Swisstransplant Foundation, Franz Immer conducts research in the field of organ donation and transplantation and publishes on topics related to transplant medicine. In the field of cardiovascular surgery, Immer has mainly dealt with the influence and optimization of deep hypothermic cardiac arrest in surgery of the aorta and has written numerous papers.

SRF News: 90 patients in Switzerland are currently on the waiting list for a heart transplant. Will they not have to wait long in the future when animal organs can also be transplanted?

Franz Immer: In the next few years, this step will not have any impact on the waiting list, in Switzerland or worldwide.

The doctor who performed this operation speaks of a groundbreaking operation. Would you agree with that?

Usually in such situations during surgery, if the recipient’s blood comes into contact with the heart, immediate rejection can occur. The fact that this heart works at first shows that a first hurdle could be overcome by genetic mutations in pigs.

Is that already groundbreaking?

I would not speak of groundbreaking yet, but it is an important signal that progress is being made if this organ has been functioning in this receiver for a few hours.

How does a pig’s heart have to be genetically modified so that it also works in a human being?

It is extremely complex. Certain features have to be cut out on the pig’s tissue by genetic manipulation.

It is a success that the heart works at all and the patient did not die during the operation.

In some cases, they also have to be replaced so that this organ is not immediately recognized as foreign in the human body and rejected. It is a long way to go to identify all of these factors. Certainly it has not yet been possible to conclusively identify all of these factors. And that’s why it is a success that it now works at all and the patient did not die during the operation.

Xenotransplantation, the transfer of cells or organs from one species to another, has been researched for a long time. Do you see the future for patients in this?

That is an extremely difficult question. It is a competition of technologies to deal with this lack of organs. I finished my medical studies around 30 years ago and have always suspected that xeno transplants would come to the clinic for the next few years. But that hasn’t been the case to this day.

I don’t think that whole organ xeno transplantation will replace organ transplantation in the next 10 to 15 years. But there are already considerable successes. For example, pancreatic cells from pigs can be injected into humans. They make insulin. Certain advances have already been made at the cellular level.

The heart needs a certain weight that is compatible with a person. Pigs are certainly ideal in terms of weight. They are domestic animals and as such are perhaps a little less protected than, for example, higher primates such as monkeys. Monkeys are also ideal. Pigs have the advantage that reproducibility is better. You have several cubs per litter. In the case of monkeys, the generation times are very long, if not to say comparable with humans.

The interview was conducted by Claudia Weber.