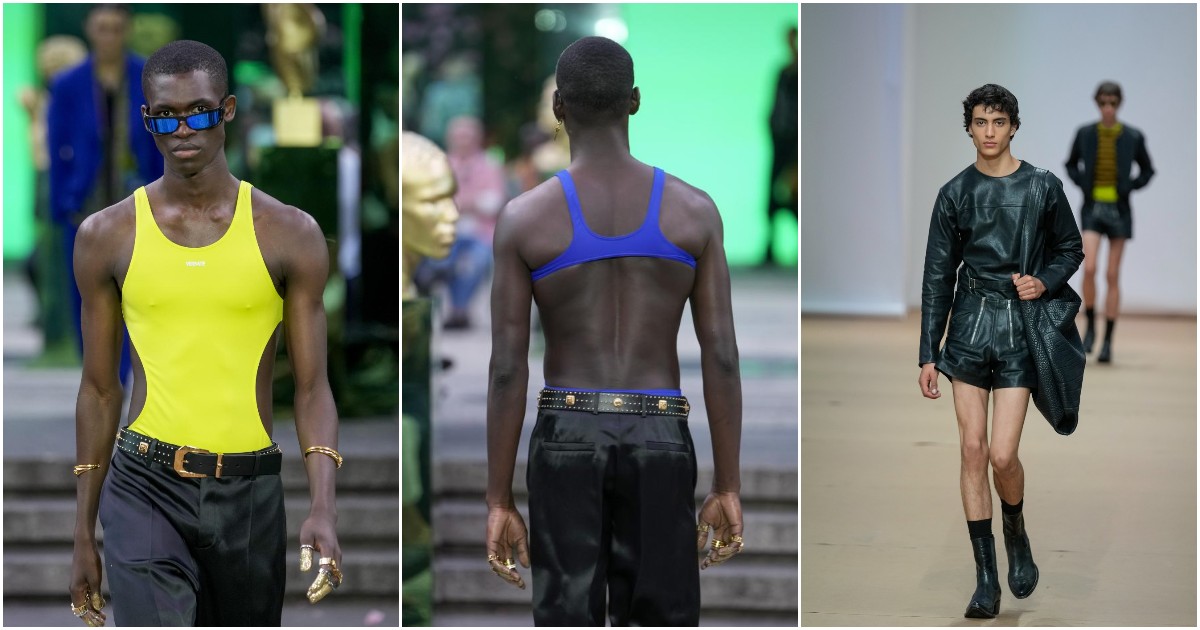 Lightness is the keyword par excellence of the summer, especially since in Milan it is already 35 degrees and we are only in mid-June. But lightness is also that absolute quality of being that manifests itself in the ways and in the spirit, in the total approach to life and, as Calvino said, “it is not superficiality, but gliding over things from above“. This is precisely the key mood seen in this weekend of men’s fashion shows at Milano Fashion Week Man’s Collection in progress in the Lombard capital. Sixty-six appointments, including major returns and debuts, scheduled in the shadow (so to speak) of the Madonnina from Friday 17 to Tuesday 21 June, with the mercury fixed above 30 degrees and the professionals already tested by the calendar tightened that he put in stride Design Week – Pitti – Men’s Fashion. What is certain is that the latter is conquering a growing role, also in terms of turnover: in 2021 it registered an increase of 15.2% compared to 2019with a turnover for the Made in Italy at 9.4 billion euros. These are the data released by Sistema Moda Italia which certify the success of the sector, combined with the enthusiasm of the president of National Chamber of Fashion Carlo Capasa, who reiterated the importance of the fact that “fashion continues to give a message of positivity and hope” in these times of uncertainty we are experiencing. Also for this reason the stylists focus everything on simplicity and, in fact, lightness, concepts that translate into models deconstructed by soft lines and relaxed shapes; in the tailoring of the cuts and in the vitamin-colored brushstrokes that wink at the new generations. It is an absolutely casual but no less accurate masculine elegance. The perfect example is there Spring / Summer 2023 collection by Brunello Cucinellithat makes the dress the central element of her wardrobe, making it the transversal garment par excellence. Very formal for the office with shirt and tie, he transforms in an instant into an evening look simply by putting a t-shirt under his jacket. Sneakers on the feet and polo shirts as a passe-partout to play down even the most rigorous of appointments, because – as Solomeo’s philanthropist entrepreneur teaches us – you must never take yourself too seriously.

See also  Gabriele Salvatores to FqMagazine: "The excess of politically correct is a form of reverse racism"

Kind of like the man of Donatella Versacethat nonchalantly flaunts a trikini in fluorescent colors like a leotard under tailored trousers or an antique pink silk trench coat, and, again, with an untied sweatshirt, in a game of contrasts and juxtapositions that sets the trend for the next S / S 2023 according to the house of the Medusa . “When I work – explains the stylist in a note – I always think of Generation Z and their enthusiasm for putting together conflicting ideas. Pop art meets classicism: an essential contrast for me, which makes you think and involve “. And so, here is his varied youth that combines transparent lace tank tops with perforated leather pants, the historic ones very logoed silk shirts now in fluorescent colors with oversized trousers, for a versatile and colorful wardrobe that has its cult item in the men’s trikini. It is imbued with youthful freshness too the first men’s collection by Filippo Grazioli, the designer from the Marches who took over the creative reins of Missoni. For him “the first was good”: his debut with menswear is absolutely promoted with flying colors because he managed to give a boost of determination to the brand without distorting its heritage at all, indeed, enhancing its casual attitude to the maximum. The iconic zig zag becomes maxi and illuminates sweatshirts and jackets through an essential and functional color palette, with white as a counterpoint. The same genuine childish enthusiasm can also be found on the catwalk of Emporio Armanidove “King” Giorgio gave free rein to his imagination imagining a collection that transports us with our thoughts in an uncontaminated jungle à la Gauguin, with a reggae twist because these garments – like life – are a container of possibilities, the mood of the holiday already in the city. Thus, the very impalpable shirt becomes the emblem of the collection, together with the super easy fisherman hat “Because dressing is also having fun”, says the designer who for his youth line also grants cropped shirts and very short Bermuda shorts. A bit like those in leather that go to make up the new “onesie” by Miuccia Prada and Raf Simonsa symbolic leader of a certain Northern European youth culture of the 90s.

The two designers have once again done a fashion exercise on the men’s uniform, once again focusing on a few meticulously studied pieces. Here then is that the show opens with the suit par excellence, with a buttoned jacket and tie, disarming in its maniacal perfection. The two designers worked by subtraction, in search of the essence of each piece: “The garments seem simple but are the result of a process of choice: there are hundreds of coats, why is this the right one? It is a combination of a long process of creation and decision, but also of instinct. It’s a question of style ”, explained Miuccia. And so here is a series of overcoats like mid-season must-haveplain or Vichy squares (symbolic pattern of this show, starting from the invitation), pink, red or green again, combined with minimal knitwear and tailored trousers at the ends of which Texan boots sprout. A game of counterpoints between bourgeois elegance and punk stylistic elements that is one with the surreal scenery of a paper house and with the soundtrack.

Punk like the soul of Marcelo Burlonwhich he celebrated in this Milan fashion Week 10 years of his County of Milan brand with a fashion show-event (+ exclusive party) al Vigorelli Velodrome, a temple of speed and music, both of which have marked his personal history. A great party that the Argentine designer, now out of the way of the Milanese social life, allowed himself and enjoyed from the first to the last second, parading in first person on his catwalk. “Life is so short you can’t waste even a day”, was the slogan with which he opened the show, while the symbol of peace emanated all its power printed on an oversized white sweatshirt. The watchword is sportsweare, and here are models of all kinds, origins and ages, from children to over-sixties, including the 100-meter Olympic champion, appear in the various humanity. Marcell Jacobs, wearing electric blue dungarees. Tracksuits, many, many, of every shape and pattern, and then all the key elements of the symbolism and iconography that have characterized these 10 years of County of Milan: t-shirt and sweatshirt with colored rib cage, paisley suits and trousers baggy, animalier and tie dye touches, all-over denim and indigenous suggestions with ponchos worn bare-chested, patchwork or with characteristic South American motifs. I’m i look trash-chic that distinguish a certain specific Milanese people, the same people who met on Saturday evening at the Vigorelli as if in a blast from the past.

In the end, a note of merit for the excellence of traditional Italian tailoring, that of Kiton and Canali, which has been able to evolve, transform and innovate without ever losing the focus on savoir-faire and all-Italian artisan quality. The first is a manufacture in Arzano, on the outskirts of Naples, which from a local reality has become an international emblem, even reaching the red carpet of the Cannes Film Festival. And that “red” can be found today in “Red Dot”, the point that will characterize all the garments for next spring / summer and which aims to become the symbol of a cultural container that will bring events organized by the Neapolitan brand all over the world. Canali, on the other hand, leaves his Brianza to land on the Ligurian Riviera and launch his own “smartorial”, or a tailored look but, at the same time, absolutely casual. It is casual, but elevated, connects the world of formal to that of leisurewear and reflects the way in which we increasingly approach the wardrobe.