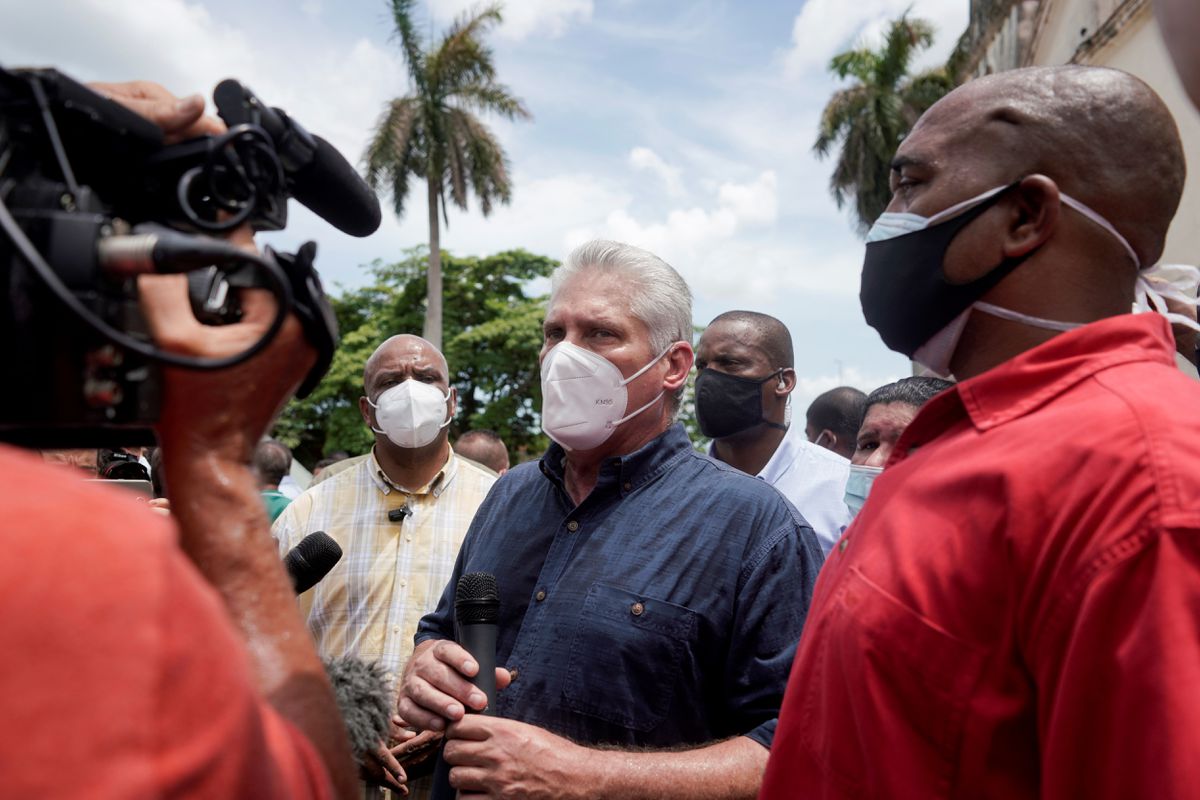 Havana and Washington have returned to the language of direct confrontation, initiating a new diplomatic escalation after the unprecedented protests that took place on Sunday in Havana and other cities and towns in Cuba, which have shocked society. The leader of the Cuban regime, Miguel Díaz-Canel, accused Washington on Friday of having “failed in its endeavor to destroy Cuba” despite having “wasted billions of dollars” to do so. With those words he responded to the US president, Joe Biden, who yesterday said that the island is a “failed state that represses its citizens.”

The protests that began on Sunday in the Cuban capital and dozens of localities, which led to violent incidents in various places and resulted in one death, dozens of injuries and hundreds of detainees, are the largest to have occurred in Cuba since the 1990s, when another serious crisis – that of the Special Period – provoked clashes in the streets of Havana during the call maleconazo. Once again, it has been the extremely acute economic situation and the hardships, aggravated by the coronavirus epidemic, that fueled the unrest and caused people to demonstrate in the streets in various places.

The Cuban government has directly accused the United States of instigating protests and manipulating social media to foment an uprising, part, in its view, of a destabilizing script that began long ago with sanctions on the regime and the resulting economic suffocation. The arrival of Biden to the White House made Havana harbor hopes that the situation with the United States would improve and that the president would recover the thaw policy promoted by Barack Obama. But six months later, the Biden Administration has not eliminated the penalties imposed by the Trump Administration, and what happened now re-fuels the bilateral belligerence of the old enemies of the cold war.

Díaz-Canel used his Twitter account to post a long line of defense and attack on Washington. “The United States has failed in its endeavor to destroy Cuba,” wrote the Cuban president, rejecting the qualification of a failed state. “A failed state is one that, in order to please a reactionary and blackmailing minority, is capable of multiplying the damage to 11 million human beings, ignoring the will of the majority of Cubans, Americans and the international community,” he said, referring to the The economic embargo that has been weighing on the island for 60 years and the strengthening of sanctions during the term of Donald Trump. “If President Joseph Biden had sincere humanitarian concern for the Cuban people, he could eliminate the 243 measures applied by President Donald Trump, including the more than 50 cruelly imposed during the pandemic, as a first step towards ending the blockade,” Díaz wrote -Canel.

According to the Cuban president, “in the United States, due to the ineffectiveness of his government, many of those who died from covid-19 could not be saved,” and he said that Washington “has a shameful record of wars and violence; brutal repression and killings of citizens by the police; racism and human rights violations ”.

On Thursday, Biden said that his government was evaluating whether it has the technological capacity to re-establish the Internet connection in Cuba, which the regime has cut after the mobilizations. The US president dedicated a large part of a press conference to Cuba at the White House on the occasion of the visit of German Chancellor Angela Merkel. Biden said that his country is willing to send vaccines to the Caribbean country to alleviate the sufferings of the population, but only with the guarantee that an international agency manages the distribution. Along the same lines of distrust towards the regime, he explained that it does not authorize the sending of remittances due to the risk that the authorities will confiscate them.

“They have cut off access to the internet, we are considering if we have the technological capacity to restore that access,” Biden said. The president was asked about his opinion on socialism, a term that in the United States is associated with communism, although the left wing of the Democratic Party sometimes defends its democratic version. “Communism is a failed system and I don’t think socialism is a very useful substitute, but that’s another story,” he replied. Once again, in the midst of this new crisis, the United States and Cuba face doggedly.

Subscribe here to the newsletter from EL PAÍS América and receive all the informative keys of the current situation of the region.