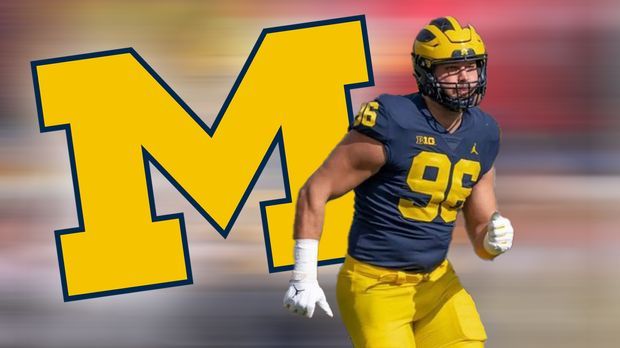 Because on New Year’s Eve, his Michigan Wolverines will meet the Georgia Bulldogs in the second semifinals of the College Football Playoffs (on the night of January 1, live from 1:30 a.m. live on ProSieben MAXX and ran.de).

Before the big duel for entry into the National Championship Game on the night of January 10th to 11th from 1:45 a.m. live on ProSieben MAXX and ran.de, the defensive end speaks in an interview ran about the famous coach Jim Harbaugh, everyday university life, his way at college and a possible German duel.

ran: Mr. Welschof, spectacular but also exhausting weeks lie behind you. How are you?

Julius Welschof: It was twelve, thirteen weeks at full throttle, and then you realize that your body needs a break. In addition, my final exams were due during the final phase of the season.

ran: How can you imagine this combination of university and college football at the top level?

Welschof: Above all, it requires good time management. But if it doesn’t quite work out, you can always write to the professors and they understand that. That’s definitely good, because football alone is of course very time-consuming. But fortunately that’s done now and since mid-December our focus has actually been on the semi-finals.

ran: For the first time since the inception of the 2014 college football playoffs, Michigan is part of the four semifinalists. How can you explain the great success this season?

Welschof: It’s always difficult to say. I think we needed a few games at first, but then we realized that we’re just a really good team. Of course we also have a lot of good individual players, but success doesn’t depend on just one person, if everyone does what they’re supposed to do, we’re very good as a whole team.

ran: What part does head coach Jim Harbaugh have in this?

Welschof: He’s obviously a fairly experienced coach and before the season he knew exactly what to improve. You can tell his NFL experience, the game preparation is always incredibly good. But he is also a perfectionist and never really satisfied.

ran: And have you also benefited from this?

Welschof: Definitive. Of course he’s also been in Michigan for a while and I thought it was good that I had the same head coach all these years. I owe him a lot in my years here because he is also a coach who cares a lot about the players but at the same time trusts his coaching staff and lets them do their thing. So I was able to develop well.

ran: A few years ago she didn’t even know the rules of American football…

Welschof: That’s correct. I stayed with a host family in Jacksonville after graduating from high school. When we were just tossing football around in the backyard, my host dad said I’m very athletic for my size and could definitely play college football. Back in Germany, I started playing with the Rosenheim Rebels and quickly realized that I could do well in the position of the D-Liner even with less experience and that athletics are very important there. At some point I flew back to the USA with some teammates and was able to recommend myself for the colleges.

Win against Ohio State: “It was incredibly emotional”

ran: You’re now part of the rotation on defense, you play a lot of special teams and suddenly you’re on the pitch at Michigan Stadium in front of over 100,000 spectators. What kind of a feeling is this?

Welschof: At first I was still very nervous during the games, but that has lessened. The whole atmosphere in the stadium is very unusual and cannot be compared with anything else. It’s always emotional when you cheer for each other with the team and then run out of the tunnel onto the field.

ran: Are there any special events or highlights that come to mind?

Welschof: The game against Ohio State was incredibly emotional. It really reminds you over and over again how important it is for Michigan to beat Ohio State. At every workout, a large screen hung in the room that read, ‘What are you willing to do to beat Ohio State?’. When you look at it after such a long time (ten years, editor’s note) finally manages to get a win again and the whole stadium goes berserk, the fans rush onto the field while it’s snowing lightly. I will never forget that.

ran: One of the heroes in that game back then was Aidan Hutchinson, who hit three sacks. He’s a top 5 pick in the upcoming NFL draft, what kind of guy is he?

Welschof: We know each other very well and live together in a shared apartment for two. You can tell he’s different. He attaches great importance to his body, eats no sugar and almost only natural products. He’s one of the most ambitious on the team and hates to lose. In a way, he infects everyone to get the best out of themselves.

“The team that is better prepared wins”

ran: They are seeded number two and will meet the Georgia Bulldogs in the semifinals (on the night of January 1, live from 1:30 a.m. on ProSieben MAXX and ran.de). What are the last days before the game like?

Welschof: We’re doing a lot of analysis right now, looking at a lot of Georgia gameplay. The difference to the regular season is that you just have a lot more time to prepare for the game. Our coaches always tell us: ‘Whoever goes into the game better prepared will win’.”

See also  The drama of the employees of the Miami and Fort Lauderdale airports: "You can see it in the eyes of the passengers"

ran: And you will be better prepared?

Welschof: That is of course our goal. Both defenses are very good and it will probably depend on which offense can crack the opponent better.

After what happened these last couple of weeks I just wanted to thank @PPIRecruits for always believing in me. It’s crazy how two Germans are going from working out in the mud to the CFB Playoffs with the help of one guy. Thank you from the bottom of my heart for changing my life pic.twitter.com/AreRqSHVl0

ran: In the second semi-final (January 31, live, from 9:15 p.m. on ProSieben MAXX and ran.de), another German will be on the field for Cincinnati in Lorenz Metz. How is your relationship with him?

Welschof: We know each other from the camps earlier, he was originally a defensive end, but then switched to the O-Line. But of course I follow what he’s doing and he’s had a pretty successful season. I hope for him that it works against Alabama, a German final would be something.