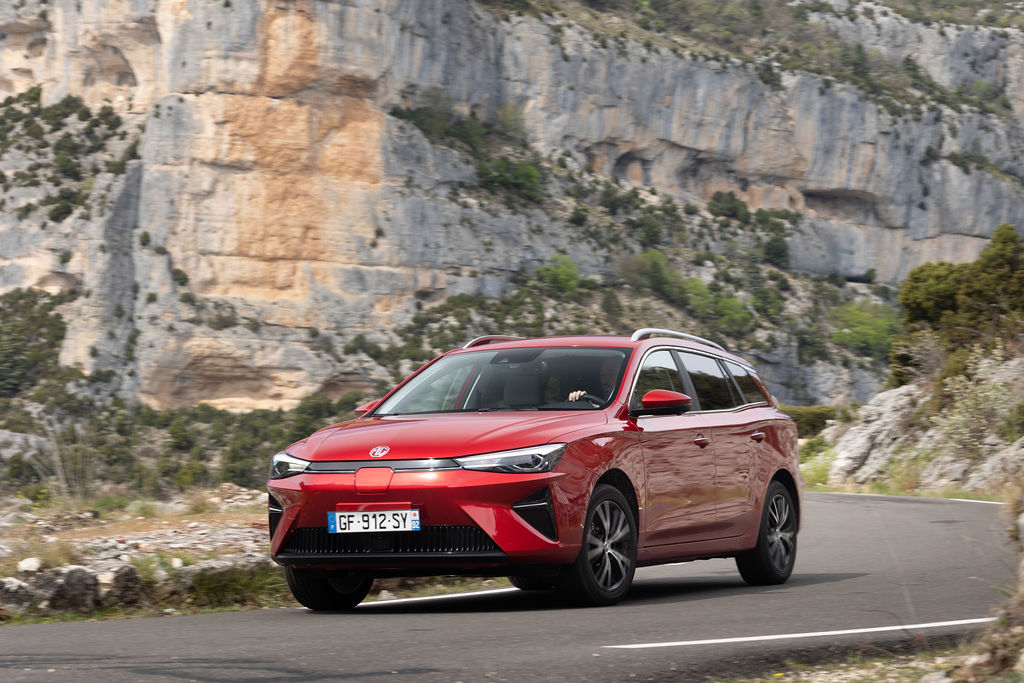 MG5: cost of recharging and autonomy over a long journey of 850 km

Crossing France in an MG5, is it possible? We will see in this file how the long journeys take place in the MG electric station wagon, using our two reference journeys. Duration, costs and comparison with other vehicles are on the program.

The MG5 recently arrived on the electric vehicle market, in a fairly new segment: station wagons. As always, MG offers an efficient vehicle at an unbeatable price. However, we are going to compare it to our summer and winter reference journeys, to check whether this MG5 can actually carve the road without a hitch, both in terms of cost and duration.

As usual, the rules will be as follows: the start will be at 100% battery, the finish at 20% and the vehicle will have to drive at the limit speeds. We will first come back to the characteristics of the vehicle (range, battery, charging power) and then compare them to the reality on the ground. Below, you will find the tables summarizing the different vehicles that took part in this exercise, so that you can compare the one that suits you best.

The characteristics of the MG5

The MG5 has a 50 or 61 kWh battery, for a WLTP autonomy announced at 310 or 400 kilometers. We are focusing today on the version with the 61 kWh battery (Extended Autonomy), but do not imagine that it can travel 400 kilometers without stopping, at highway speeds.

Its CCS Combo port ensures that it can be recharged on all available networks, such as Ionity, Totalenergies, Allego, Fastned or Tesla Superchargers open to all if necessary.

The maximum charging power is announced at 87 kW, which ensures a passage from 0-80% battery in 40 minutes in ideal conditions. Unfortunately, this does not make the MG5 one of the queens of fast charging, and we will see below if this is sufficient for journeys of more than 800 kilometers.

As usual, A Better Route Planner will be used to plan routes, with the default fuel consumption reference for the MG5 Extended Range.

To put all vehicles on an equal footing, we start trips at 100% battery, considering that you have to pay for this filling at the average price per kWh in France, currently at 0.17 euros. The 61 kWh then represent 10,50 eurosand we will take this cost into account when it comes to taking stock of each major journey.

See also  End of plenty: Macron warns: "the last five-year term will kill the French welfare state: we must accept it or perish"

Fast charging prices have fluctuated for a few months, but we consider here that on average, the kilowatt hour recharged on the road is 0.68 euros. Depending on the networks, it can be more or less expensive. However, in order to compare all vehicles fairly, we retain this rate. 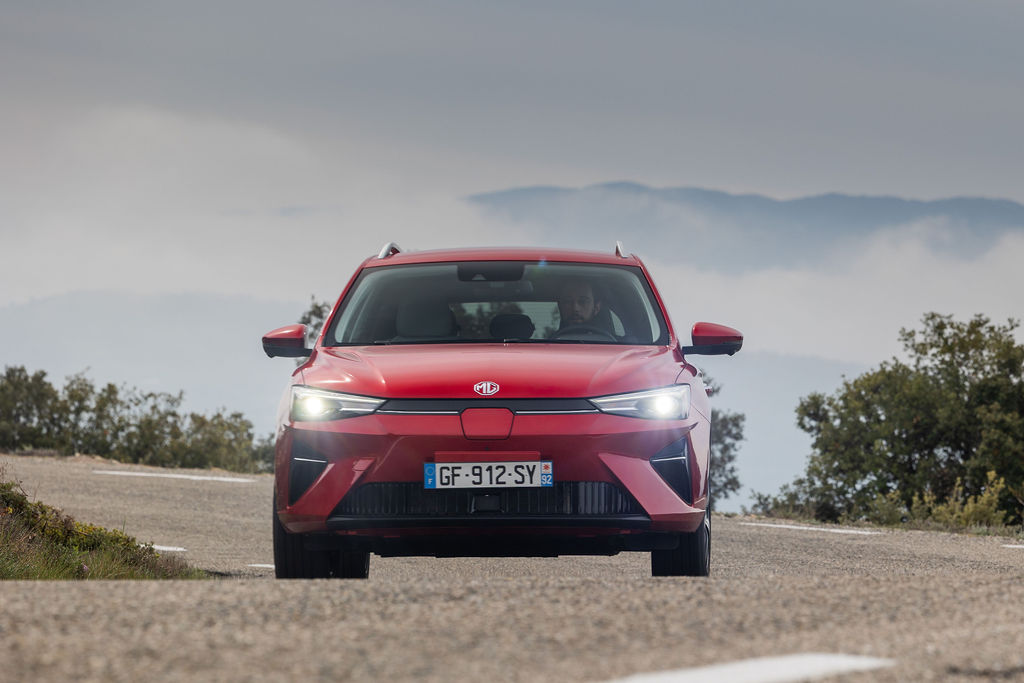 The first major route will simulate a summer vacation from Orléans to Arcachon (530 kilometers), and the winter route will begin in Caen and end in Chamonix-Mont-Blanc (850 kilometers ).

For the summer route, the parameters indicated in A Better Route Planner are as follows: 25 degrees Celsius outside temperature, no wind, arrival at a charging station with at least 10% battery remaining, and arrival at destination at 20%. For the winter trip, it’s essentially the same, apart from the weather, where we chose a temperature of 0 degrees Celsius.

The balance sheet of the different routes

One hour charge for 530 kilometers

Our summer trip from Orléans to Arcachon is quite well supplied with fast charging stations, allowing even vehicles with a small battery to get by without a hitch. This is true with the MG5, which needs three top-ups to arrive safely with 20% remaining battery.

Ionity is exclusively used during this journey, with a first charge of 11 minutes, and two longer ones, 29 and 24 minutes respectively. 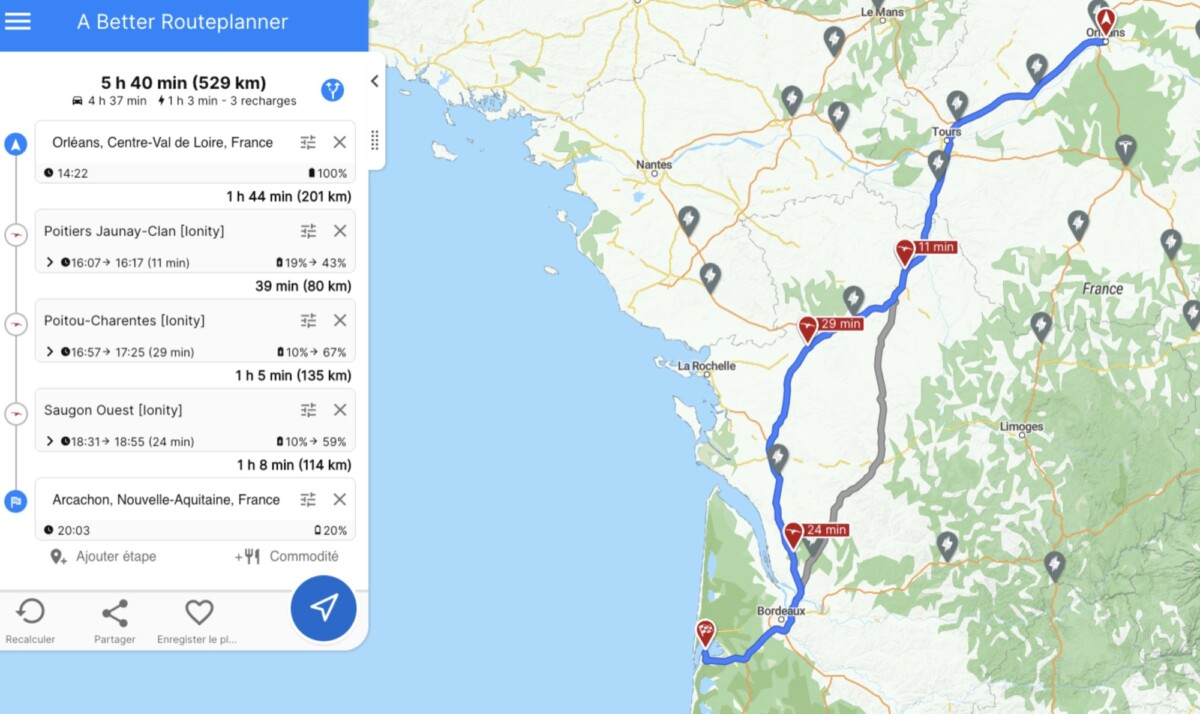 The price linked to these fast charges is estimated at around 45 euros. Adding the starting home load, we get a price of 55 euros for this summer trip. The average consumption is estimated at 215 Wh/km, which corresponds to a range of 280 kilometers from 100% to 0%.

One charge every 100 kilometers in winter

The conditions of our winter reference route are particularly difficult for electric vehicles. In addition to the length of the journey (850 kilometres), the temperature of 0 degrees associated with the positive elevation at the end of the route puts the MG5 to the test.

In practice, seven recharges are offered by A Better Route Planner, for a total duration of 2 hours and 36 minutes. The longest distance between two charges is that of the departure, with a little more than 150 kilometers before recharging. Next, it takes on average one charge every 100 kilometers. 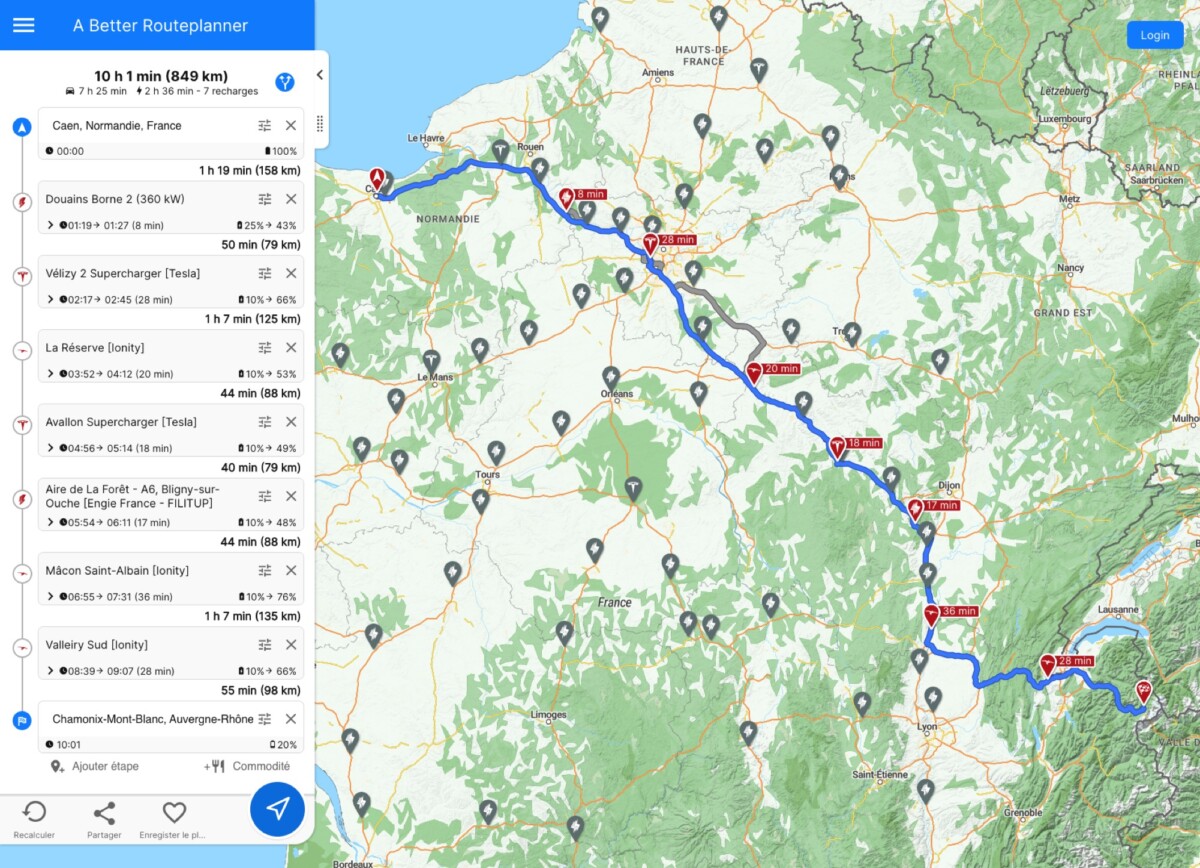 Fortunately, the density of fast chargers is such that it does not pose a problem to get to your destination, even if it means stopping relatively frequently. The cost related to fast charging is estimated at around 112 euros, and by adding the price of home charging, this gives a fare of 122 euros for this winter journey.

In terms of consumption, it is estimated at 252 Wh/km, or 17% more than during the summer trip. The autonomy of the MG5 with this consumption is approximately 240 kilometers, far from the 400 kilometers WLTP announced.

Consumption, cost of recharging and range

We summarize the costs and charging times (including charging at home at 10.50 euros) in the table below, and you will be able to visualize as we go along with our examples where the vehicle you are interested in is located. compared to others on a similar route.

The MG5 can cross France, even if it means taking its time

Crossing France in an MG5 is indeed possible, but it is clear that it is necessary to take your time, and to recharge quite frequently. For the summer trip, with a charging time exceeding an hour, the MG5 is at the bottom of the table, at the level of the Renault Mégane E-Tech or the Hyundai Kona.

The Tesla Model Y Propulsion, which has a battery of comparable size, displays a charging time halved, which is significant enough to be noted. In terms of cost, this MG5 trip is approximately 10.40 euros per 100 kilometers. For comparison, this is equivalent to a journey in a thermal car consuming around 6 liters per 100 kilometers. 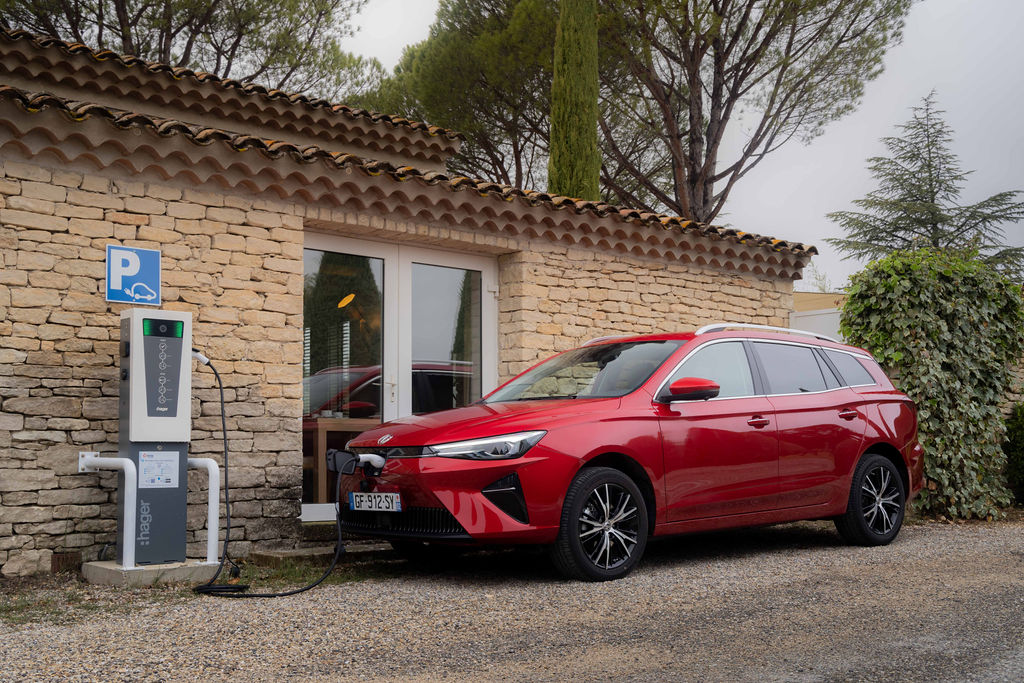 For the winter journey, the higher consumption implies a significantly higher cost. This is how 14.35 euros per 100 kilometers for the MG5 in winter, which is 38% more than the summer route. The journey time reaches 10 hours, which puts the MG5 on the same level as the Hyundai Kona, or the Kia EV6 58 kWh.

It is possible to optimize the cost of long journeys using subscriptions at Ionity, Tesla or Fastned, but this is only useful for big wheelers. If the prices linked to these long journeys scare you, keep in mind that on a daily basis, the MG5 recharged at home displays a cost closer to two euros for 100 kilometers, which is impossible in a thermal vehicle.

Help us to build the future of Frandroid by answering this survey !