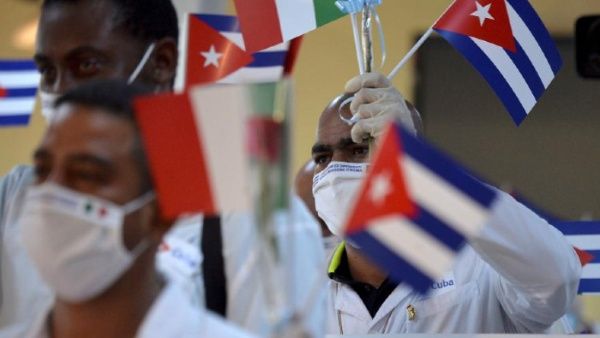 Andres Manuel Lopez Obrador informed on Monday upon his return to Mexico from Cuba that his government will hire 500 Cuban doctors to overcome the shortage of specialists in the country.

“That is why this decision to hire more than 500 doctors who will already be working, so that the purpose we have made of guaranteeing the right to health, medical attention, medicine, studies and free clinical analyzes for those who they don’t have social security,” he said during his daily morning appearance at the National Palace, according to the local newspaper The universal.

“We are also going to hire doctors from Cuba who are going to come to work in our country; We made this decision because we do not have the doctors we need in the country”said.

Referring to the bilateral health agreement signed with Havana, and about which no details had been offered, the president said that it is also planned that Mexican medical students will be trained on the islanda program of his Government that in previous calls has hardly found candidates, despite the fact that the Mexican authorities bear the expenses of the scholarship recipient.

The president’s announcement comes after Cuban-American legislators asked the federal government to investigate the alleged violations by Mexico of the North American Free Trade Agreement (T-MEC, for its acronym in English) due to the hiring in 2020 of medical personnel. from Cuba.

DIARIO DE CUBA, which closely followed this Cuban labor export agreement, revealed various arbitrariness committed during those monthsincluding the secrecy and opacity with which the issue was handled, as well as the payment of 6,255,792 dollars for the work of 585 Cuban doctors and nurses who spent three months in the neighboring country.

López Obrador confirmed that during his stay in Cuba he met with Raúl Castro and praised Miguel Díaz-Canel.

“I also want to openly express my great satisfaction at verifying that Cuba has an extraordinary president, Miguel Díaz-Canel, an honest, hard-working, humane man, a very good person, a good public servant and a good human being, and that gave me a lot taste,” he said.

About his meeting with Castro, he said they were talking. “He is already retired, he is 91 years old, but he is part of the history of Cuba,” he commented.

López Obrador also announced that he had agreed with Havana to purchase doses of the Abdala vaccine to vaccinate children between 5 and 12 years of age. “They are vaccines for children, basically for Covid,” he commented.

He also added that “it is possible that by August all the vaccines for minors will be available,” although he said that on Tuesday he will give more details on this issue.

Previously, the undersecretary of health, Hugo López Gatell, had mentioned that for the vaccination against Covid-19 of children between 5 and 11 years of age, the Government of Mexico was analyzing various ways to acquire the immunizer.

He stressed that among the doses analyzed were Abdala; Sinovac, made in China, and Pfizer.

“We have not had any claim from the United States Government for exercising our right to be free and sovereign. Whenever I speak with President Biden, the issue comes up that it is a relationship between equals and that they are respectful of the sovereignty of Mexico. “, said.

López Obrador showed the press a historic pistol that Díaz-Canel gave him, a gift that Francisco Madero, the president who led the Mexican Revolution, had made to give to the caudillo Francisco Villa.

“Even with the disagreement of the conservatives, the relationship between our peoples goes back a long way and has been very fraternal. So much so that President Díaz-Canel handed me a pistol, which is a jewel, to return to the Mexicans,” he said.