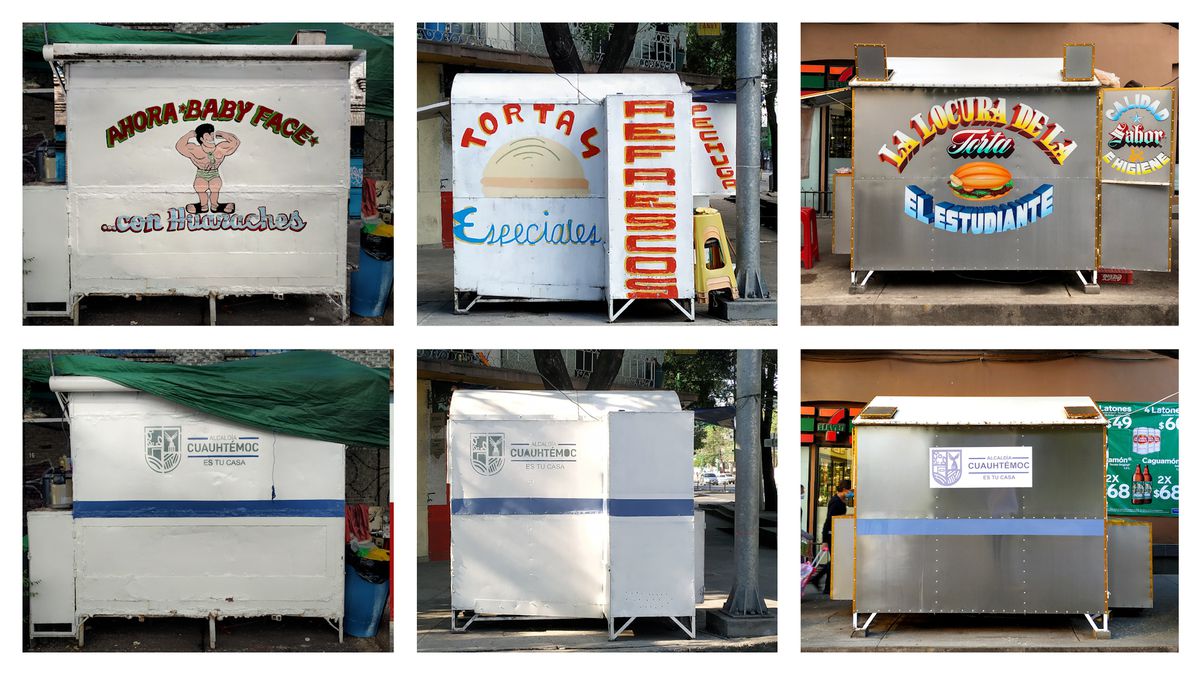 It happened one morning in May. Suddenly the signs were gone. When Hugo Mendoza wanted to realize it was too late. Those brightly colored graphics that marked the street stalls of tacos, tortas, quesadillas, juices, had disappeared under layers of white paint with the coat of arms of the Cuauhtémoc mayor’s office. And with them, a part of the identity of Mexico City that could no longer be saved, says Mendoza on the sofa in his house in the neighborhood of Santa María de la Ribera. This sparked off a heated debate on public space, the right to the city and popular culture.

—It was lost overnight and there’s no way to get it back.

It all started with a statement and continued with a video. At the end of April, the Cuauhtémoc mayor’s office reported in a document that a “comprehensive day to improve the urban environment” was beginning so that “traders on public roads always keep their work area clean.” It was a unilateral decision. The translation to reality was as follows: the street stalls, that essential part of the urban landscape of Mexico City, were dyed white and marked with the administration logo.

But Mendoza (31 years old) crossed the institutional decision. The young man, a designer by profession, manages an Instagram account called Pintura Fresca in which he had been recording the artistic value of signage for a year. When he witnessed his disappearance, he made a video that he uploaded to his profile. In it, he asked: “What happened to the signs in Cuauhtémoc?” His doubt went viral.

-For me it is a tradition as important as wrestling or mariachis. The signs are part of the identity and culture of the city and of the Mexican. They are culturally and historically valuable: they speak of who we are, what we eat, what we do on the street. The label should be protected as a cultural asset.

To combat the measure, Mendoza created Rechida: the Chilanga Network in Defense of Art and Popular Graphics, which has about twenty people and has mobilized in support of a couple of hundred more. Yuriko Hiray (29 years old), publicist, old friend of the designer and “sign enthusiast”, joined the platform: “Seeing a city painted in white, uniformed, brings us closer to these super flat, approved cities. That takes away a lot of identity, richness and visual language.”

The removal of the labels is also a symptom of other more serious issues, Hiray points out. “These types of actions respond to other dynamics such as gentrification or touristification.” Also the rise in income or the “massive arrival” of foreigners from wealthy countries that raise prices and make life more expensive for the local population. Mendoza adds: “The action of erasing the signs, in addition to being taxing and authoritarian, presents us with other problems: the merchants on the street do not really have the right or voice.”

Most merchants do not want to give their name for fear of getting into trouble. A couple who runs a food stall confesses anonymously that they were forced to remove the signs and several flags from different countries with which they decorated their premises: “The mayor’s office is a mafia.” All the workers consulted affirm that they had to buy the white paint, and that the administration only added the logo, something that those responsible for Cuauhtémoc have denied to this newspaper.

The mayor’s office defends that the objective is to maintain the stalls and that they have the support of the merchants. A spokesman assured EL PAÍS: “We consider that what is happening is an attack because we are not from Morena [el partido del presidente, Andrés Manuel López Obrador]. I’m going to eat because I see a stall full of people, I’m not going to pay attention to the signs. Saying cakes or tacos is not art. I don’t think part of the identity is lost.” A source from the team of Claudia Sheinbaum, the head of government of the capital (and also of Morena), explains that there is a legal vacuum. Although the attributions of the mayor’s office include the ordering of commerce on public roads, there is no specific regulation on colors. “Part of the popular culture is that everyone labeled the businesses to their liking,” she maintains.

The erasure of signs is not an exclusive problem in Cuauhtémoc: similar processes are happening in “Xochimilco with the colors of Morena”, Hiray, Tlalpan or Gustavo A. Madero point out. However, the Cuauhtémoc is the first piece of the domino: the key piece that set the debate on fire. It is not the first controversy in which its mayor, Sandra Cuevas, a member of Va por México, a coalition of ideologies: the right of the PAN, the PRI and the left of the PRD, has been involved.

Last March, Cuevas had to publicly apologize for assaulting three police officers and pay compensation of 30,000 pesos to each one. It was the front page of the local media when, in a festive act, he threw balls with 500-peso bills from a balcony of the mayor’s office, according to reporters present at the time. On another occasion, he said: “I was poor and I don’t like poor people. I love people and I have told them when I walk through the popular neighborhoods, I love them so much that I do not want to see them poor and I am not going to come and give them gifts, I am going to give them the tools to grow.

“Sandra Cuevas has repeatedly been involved in various policies and statements in which she herself has expressed her aversion to poverty. Her idea of ​​progress is towards what the rich do, not towards popular cultures”, considers Hiray. “These cultural manifestations have been eliminated with the excuse that public space is being ordered and cleaned, but at the same time corporate advertising objects are preserved,” agrees art historian Aldo Solano, who is doing his doctorate on space public in Mexico City.

—We all have a close relationship with public space. We deposit feelings, emotions, we are fond of a building, we remember something pleasant or unpleasant that happened to us in a certain place and we fill these sites with content. The labels are part of that landscape. The mayor herself is not winning politically, she was shot in the butt. I think it is an exercise of power over sellers. She tells us about how the local government perceives public space: as a support for its political propaganda, to advertise itself, and that should not be, it belongs to all of us. The mayor’s office must provide the resource for new signs to be created.

The streets that surround the house of Isaías Salgado (52 years old), in Tepito, bear his mark. He is one of the few artisans who are still dedicated to sign making, a trade from another era that cannot compete with new technologies. Almost all the graphics of the establishments in the area were born from his brush, shown on a walk through the neighborhood. He started in the business 35 years ago as an apprentice to his uncle and studied advertising drawing. Creating images from nothing is a family affair: one of his sons is a tattoo artist and in the living room of his home, in a humble neighborhood, his grandson works hard to color a sketchbook.

—Very bad vibes from the mayor [Sandra Cuevas]. It takes away the work of many, and we are already few sign makers. It’s part of the culture, people appreciate it. Here in this neighborhood everyone loves me, they want me to paint their businesses, they like art. I call it art, not everyone does it, I guarantee it.

It is that time of day that photographers call “golden” because of the quality of the light. A few kilometers from Tepito, in Roma Sur, Rubén Romano (53 years old) picks up his newsstand for another day. His local is already an anomaly: he has a blue drawing that occupies the entire plate, with a white, pink and purple skull that smiles at those who cross its path. Representatives from the mayor’s office came weeks ago to tell him that he had to delete it, but he resists. “I’m playing dumb”, he justifies himself. A color dissident who preserves a museum piece: a position at risk of extinction.